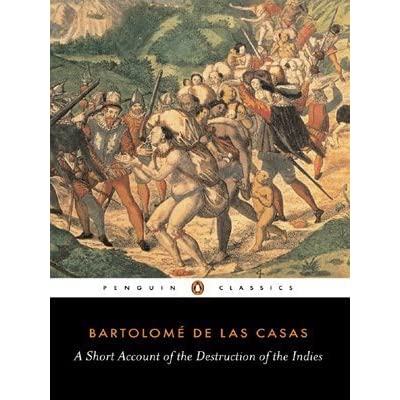 If you ever visit Mexico City, it is a worthwhile one-hour drive that will take you to Teotihuacan, where the truly magnificent Pyramid of the Sun and the Pyramid of the Moon will awe any tourist.  Hidden just behind is a cave restaurant that is highly recommended for its authentic Mexican cuisine.  But these pyramids hide a lot more, a story of mass extermination that would be repeated beyond Mexico.  Mexico City’s “Historic City Center” too is a gruesome reminder of the once glorious Aztec city of Tenochtitlan, now a tourist site, with plenty of churches all around.

The conscientious writing of Bartolome de las Casas, first published in 1552, would be perhaps the first to highlight atrocities by a barbaric set of Spanish Catholics in the Americas.  These would precede the English arrivals of the early 1600s.  Las Casas’ Devastation of the Indies is a short yet difficult book for the conscientious to read.  He wasn’t the only person to raise moral objections, nor the first.  Although his works were published in multiple European languages, they would have little effect on the subsequent horrors that visited the natives of the Americas.

By Spanish accounts themselves, the Americas were very impressive, with few urban centers in Europe even remotely matching the well-administered cities they encountered.  “Such magnificent roads could be seen nowhere in Christendom…” wrote Hernando Pizarro.  “In all Spain, I have seen nothing that can compare with these walls and the laying of their stone were so extraordinary that it would be difficult for anyone who has not actually seen them to appreciate their excellence” wrote Cieza de Leon, “…health and life expectancy of the natives had been far superior to that of the Europeans prior to the Columbian invasion…”, “…welcoming Indians…friendly Indians…repaid by plague”.  Sadly, centuries later, most of us have not spent enough time to understand what happened.  The few who do would not be enough to awaken the rest, while the guilty prefer we move on, and think of it as “history”.

So Was It Just Disease?

Most people have been told that it was disease that killed off the native Americans.  “Mainly disease” is a cruel half-truth, a method of hiding the intentions of the arriving Spanish Catholics.  Setting sail from Spain with boats that often carried sick crews, with some joining voyages due to penury, all accounts do state that the resistance of the natives was cruelly tested by diseases too long to list. But humans often survive disease and build the required immunity if the circumstances allow. But not when survival and recovery were to be intentionally denied.

Hospitality and welcoming feasts would be rewarded with pandemics, killings, slavery, starvation, mass poisoning, mop-up operations, disease by rape, use of advanced armaments, and dogs of war trained to disembowel captured and fleeing natives. To see what India was facing at the hands of the Islamic arrivals in the second millennium and at that very time in the 16th century, multiple sources can be accessed, including Meenakshi Jain’s scholarly brilliance in The Flight of the Deities, and the works of Sita Ram Goel or K.S. Lal.

The swine flu epidemic of 1494 in Hispaniola would just be the first in the series.  Within decades in the visited areas just south of the current United States, populations would drop by 90%, if not more.  One need to only name the countries and their various regions in today’s political map of South & Central America, and the Caribbean.  All of them.

Recovery at gun-point would be made impossible, when enfeebled captives had no one to help them get better, with little knowledge of how to survive through unfamiliar symptoms.  Crops unattended to with few available healthy hands to nurture them, those lucky enough to escape would simply abandon their land, many to simply die in safer territory while also spreading disease inland.  Entire generations would be wiped out, with women and children targeted for either killing or enslavement, contrary to the rules of war followed by the natives.  The wealth would be plundered from both dead and living, with survivors enslaved and marched off to mine for gold, and satisfy the insatiable greed of their captors.

Around this time period, India too would face the wrath of a horrific warlord, the Mughal Babur.  He too would sometimes arrive into untended land in India, and complain about finding insufficient food for his soldiers.  He was merely the latest serial killer in a multi-century onslaught on India.  Native Hindus lucky enough to know of the impending doom had already run into the forests and mountains.  Indeed, large sections of India’s current surviving tribal population were proud warriors forced to flee, yet to fully recover from the cruel invasions of over the prior four centuries.  Today, they are subject to 21st century Western evangelists, with willing native traitors as interpreters.

Let us take a look at some of the titles that preceded the arrivals into an Old World that would be rechristened “The New World”. Jesuit, Franciscan, Dominican, bishop, Father, brother of the Earl of Northumberland, Puritan, pastor, clergymen, padre  and, of course, Church “mission”.  These were not simply European or “White people” but men of the Church, initially mostly Spanish, accompanied by militiamen, soldiers, and the impoverished European desperate to escape a devastated Europe.

Spain of the 15th and 16th century was described as a land of violence, squalor, treachery, intolerance, and the rest of Europe was no different, by Spanish accounts.  “..the rich ate to excess…while the rest of the population starved…”,  “permanent threat of harsh and unreliable law enforcement…nourished a feeling of universal uncertainty..”.  In Genoa (Italy), “the homeless poor sold themselves as galley slaves every winter…”, Rome “was a graveyard of fever”, “…child slaves as expensive as adults, for reasons best left to the imagination...”.  One has to keep in mind that Europe’s masses of “White people” were themselves being brutalized by the Christian ruling elite at the time they set sail for the Americas on this odd type of “religious” conquest.  In fact, Jews were being deported from Spain on the very day Columbus set sail for America.

The Peaceful Delight of Cruelty and Extinction

Wherever Columbus arrived in the Americas, he would plant a cross and claim ownership. Indians were to be read a statement informing them of the truth of Christianity and the necessity to swear immediate allegiance to the Pope and the Spanish Crown. Then would begin not simply disease, but “a sadistic spree, a delight in killing, a pleasure in inventing all kinds of cruelties” including  Aztec priests being fed to the dogs of war.  Reminiscent of the Islamic khams, the cruel Cortes too would claim a one-fifth share of the bounty.  The main Spanish fear at the time was merely that too many “Indians” would die, impeding their ability to mine for gold or to do the work of slaves.  While the Islamists into Central Asia and India would be known as head-choppers, the Americas too would see head-scalpers, considered good for “trophy retention”.  Cortes would claim he was on a “mission of peace”.  Readers will find claims of being the “religion of peace” quite familiar in the 21st century, with the beheading of a French school teacher just one of many recent examples of a very old pattern.

From 8 million in 1496, leading scholars have agreed that the native population of Hispaniola had gone almost fully extinct by 1535.  Within 40 years.  Central Mexico would go from 25 million in 1519 to 1.3 million in 1595, a 95% decline in 75 years.  The Portuguese too would set up base in Brazil in 1549, when King Joao III divided the Brazilian coastline into “captaincies”.  By the end of 16th century, 60m to 80m natives of Central and South Americas were dead.  Aguirre’s expedition would become “a byword for sensational horror”.   It might shock to learn that Spanish padres would also attempt to convert natives just before killing them.

While the first attempts in India were in the early 8th century, the Islamic warlords would only find continual success in their frustratingly slow expansion from the late 12th century against perhaps the most resilient natives against Abrahamic conquest.  One thing that became evident over time was that the rules of war the Spanish Catholics into the Americas and the Islamic warlords into India followed were, to put it mildly, different.  The Hindus followed a far more humane and honourable code, much like the native Americans. In the Americas, war was considered a sacred endeavour, with women and children spared, and casualties minimal.  The losing side was not to be mass enslaved, or their wealth and material subject to total usurpation.  The Catholic Church, of course, would adhere to a far more savage code, while later branding the natives as barbaric, inventing atrocity literature and claiming to bring “civilization”.

If these researched accounts shock the innocent reader, imagine the effect they have on conscientious scholars.  This is merely a glimpse of the early and largely Spanish and Portuguese horrors in the Americas.  What followed will further shock: the next arrivals from England would also be horrific, as the Spanish themselves would point out, and modern scholars have agreed. The mid- 16th century would also see the groundwork laid for the Portuguese Inquisition of India, along India’s western coast and especially in the state of Gaumantak, known world-wide as the party beach destination Goa.

It is worth noting that we are not talking about Spanish or Portuguese common people of the 16th century or of today, or of “White people”, but about the Catholic Church, whose treatment of non-Christian peoples and belief systems are scripturally sanctioned.

Kindly read the introduction to this series: B V Rudhraya, Hindu Indians and the native American “Indians”: The Missing Story, September 2020, YourAwesomeIndia.com