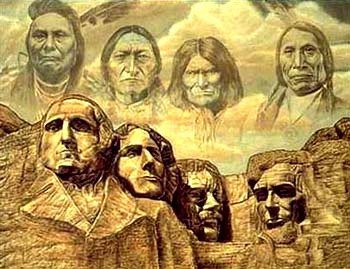 Hindu Indians and the native American “Indians”: The Missing Story

The Natives of the Americas.  What the Christian arrivals from Europe initially called the “Indians” of the “New World”.  What would the native American “Indians” have in common with the actual Indians, the Hindus of India?  One of the lesser explored subjects in colonial historiography is the striking parallels between the destruction of the native cultures of the Americas vis-à-vis the destruction of India, specifically by the Church.  In the coming decades, one might expect this will no longer be a lost or peripheral subject.

When Columbus arrived in Hispaniola (now better known as Haiti & the Dominican Republic) in 1492, it was on a Pope-approved expedition, and what followed was the Christian destruction of the civilizations of the Americas, not yet a “white man” destruction (the elaborate Church-pushed race theories would come centuries later).  It is also a five-century lie that Europe was technologically advanced and brought civilization to the prosperous and welcoming Americas but, then, the colonial narrative pushed into our media and education system has ensured few would believe the truth – that the Europeans were nowhere near the most advanced technologically compared to the Americas, or in India’s case, relatively backward technologically.  The lie factory has no limits and many twists.

The Double Assault on India

The native Americas would never see an Islamic invasion of the type that would pound away at Africa and India, and pave the way for the Church.  No leap across the Atlantic would come from Islamic conquerors off the coast of Morocco or Sierra Leone.  This is one of the interesting differences: the Portuguese Inquisition of India on its western coast (including Goa) that started in the 16th century was coming well into the multi-century and ongoing Islamic invasion of India.  The Portuguese were to be joined by many other denominations and European ethnicities.

Over 8,000 miles away, the Americas would see a 90% decline in their population.  In terms of sheer numbers however, the Hindus of a far more densely populated and not yet vivisected India would see a much bigger decline as well as displacement, especially during the Islamic assault. The surviving enslaved Hindus would then form the newly “acquired” religious Muslim makeup of the Central and West Asian, Arab, and the Eastern and Northern Africans too.  The later Church arrivals, including various European slave traders, would also participate in the “commerce”, with more Hindus to be displaced again towards eastern & southern Africa as well as the Caribbean and Polynesia.

The Church’s representatives in the Americas would do what the Islamists like Timur (the starting point of the Timurid dynasty that would become the Mughal Empire in India) would have relished, which is the “pyramid of skulls” displays following the “total victory”.  The civilian non-combatants would be theirs to “own”, as per approved Abrahamic scripture.  In the Americas, the natives would also face horrors such as being crushed, butchered, fed to dogs, hunted, with their riches taken to feed the greed and bloodlust of their wealthy Church sponsors.  It is hard to know which “Indians” faced a worse outcome but it is, in this author’s view, incorrect to assume the annihilation of the Americas as unique when the Hindu experience was just as horrific and of a larger scale.  The Hindus have just survived better, and now attempt to tell the tale, to recapture the narrative.

It has been seven decades since India’s independence, and the native Hindu historians have yet to find their footing in the vast maze of biased Western academia.  What we see are Indian professors most of whom (thankfully, not all) are compliant with Western narratives on India.  Their subservient India-based liberal-Marxist-Islamist historian counterparts are not helping matters.  There is one ray of hope though, that Hindus have, which the native Americans do not. The leftover minuscule number of native Americans might have some of the knowledge and scholarship of the horrors that visited the Americas, but not the critical mass amongst themselves to mount a correction without approval of their oppressors’ descendants, or the support of the conscientious among them.  The native Hindu Indians, like other natives, also face these challenges, but at least are building that critical mass to overturn the dishonest historical narrative.

Of course, self-exonerating methods of historiography still apply. As David Stannard wrote in his “American Holocaust” (Oxford University Press, 1992), by introducing disease as the primary cause of death, this would be sufficient to displace responsibility from the intended killing, to give the impression that the extermination was inadvertent.  In India too, many tricks would be inserted into the history books, one being “divide and rule”.  The Hindus were not ever “united” against the Islamic invaders who did not come to India “just to loot”, but rather were in a multi-century civilizational war against their enslaved former Hindu brethren and their West and Central Asian Islamic warlords enslavers, who themselves were slave-kings.

The “brutal caste system” and “martial races” theory naturally would miraculously appear in other regions including Africa, wherever the churchman would appear, with the Islamist historians more than willing to accommodate the Church historian’s narrative in elite Western academia.  Perhaps the exterminated native Americans did not require a post-annihilation set of tropes to justify their end. In any case, we might consider not simply saying “the white man” but “the white man of the Church”. An entire vocabulary is waiting to be invented and clarified.

With extermination, the native American collaborator with the Church is all but gone, perhaps due to a lack of sheer numbers or lack of necessity. (Note: This writer has not done a survey of the current native American history writing scene.)  In India, however, our collaborators with the colonialists can be seen with the naked eye, and are especially present in Western academia and as OCI card- holding public intellectuals and journalists.  They know not what their ancestors faced, and many would rather push the falsehood if it hits to close to home.  But truths are hard to suppress forever.  Best that few do know, within the confines of academia and interested private scholars.

So what did the Europeans see when they visited the Americas.  For one, relative to Europe, far more organized and cleaner cities, with well-regulated markets that were largely missing in European urban areas.  A “new world” that was quite old itself (its origins and migrations from NE Asia onwards are another research area), with a cultural diversity far greater than on the European side.

As David Stannard pointed out, it is (European) cultural conceit that has been the driving force of European-descended historians who have told of the extermination of the Americas by Europeans. They had a lot to hide and overwrite, and plenty to rationalize.  As a Hindu Indian, this is all too familiar, given that India’s ancient civilization even today has had to deal with conceited and dishonest colonial historians of the Abrahamic and liberal Marxist variety, using their conceited Westernized and Islamist proxies, useful idiots, who remain citizens of India even today.

Harvard historians such as Oscar Handlin, Bernard Bailyn and many others referred to the Americas as “wilderness” and “chaos”, while India has had its own share of Cambridge historians pushing India as “The Anarchy” even in the 21st century, echoing Oxford historian Hugh Trevor-Roper.  Deliberately under-estimating the population numbers of the Americas, while making the settler European groups out to be victims themselves seeking a safe space, these little tricks have been used for too long.  In India, the trick has its own little variation: “a company that came only to trade” (the East India Company).  Prior to the “trading company” from Europe, mainstream historians have collaborated in whitewashing key Islamist rulers as “egalitarian” and “innovative”.

One has only to imagine: what if the native Americans had been successful in at least surviving, like the native Hindu Indians, and in finally beating back the invasions? What if the current United States was still about 75% native American? Whatever story they would tell, there will be an audience of colonial descendants and opportunists who will refuse to listen.