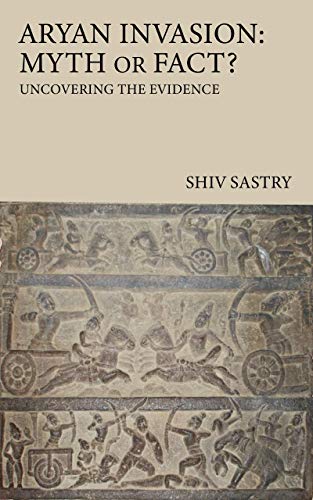 Did you know that bread, butter and cheese have their origins in the cheese sandwich? Sounds ludicrous, obviously.  But such is the entire genre of academic propaganda that houses the Aryan Invasion Theory (AIT) literature over the last 200 years.

The claim that people known as “Aryans” arrived from outside India, colonized it, and mixed with the local “Dravidians”, is one of the most contentious topics that occupies the mind-space of Western and Indian academics even today.  With its beginnings in the hardly wise “intellectuals” of the “Enlightenment” based in 19th century Germany, its theological and racial origins are not well understood by the wider public, nor fully evicted from school texts.  Debunked repeatedly, yet revived constantly through “creative” approaches, reading through the AIT literature has always been challenging.

Shiv Sastry, an acclaimed surgeon, who also makes very informative videos on Indian military aviation, has come out with a collection of essays centred around the main themes covering AIT studies. With detailed research into numerous sources carried out over 7 years, finally we have a book that the less technically inclined can read with ease.

Essay by essay, each of the little tricks employed by the dishonest European intellectuals and academics are dissected and shredded.  These include the invented “races” Aryans and Dravidians, as well as the invented languages Avestan and Proto-Indo-European. If that wasn’t enough, they had to invent “sciences” like linguistics, anthropology, sociology and so forth. Not that these disciplines have nothing useful to offer; that would be incorrect.  But it is their colonial era motivations that has made some of these “research studies” more art than anything remotely scientific.

From wrongly dating the time period of Harappan culture to suit Biblical chronology, to their attempts to “explain” Sanskrit and Vedic culture as belonging to everywhere else but India itself, for two centuries now they have tried their level best to demean and appropriate Hindu civilization to a foreign source. Any scholarly rebuttals are then swiftly met with accusations of “Hindutva Nationalist”. One must at least applaud these propagandists in “South Asian Studies” university chairs for their relentless stamina, even as their reputations slowly descend into tatters.

Between guesswork and wild claims, AIT is the hoax that should have died a long time ago.  But for that, our India-based Anglicized liberal-Marxist intellectuals and academics too would have to display something they sorely lack: integrity. Instead, they have played ball. As the author himself states in one chapter: miraculous detective work was completed with no proof whatsoever, but proof was sought for the conclusion after it had been wrapped up.

Sastry’s work contains useful analogies that simplify the available research, including the cheese sandwich analogy mentioned earlier. I give this book a strong recommend, especially for its coverage of the main tropes, as well as the section contrasting India and Persia.  The smooth style will suit lay readers, while those already familiar with the subject will find it useful to have all the main themes placed in one easy access book.

Available on Amazon.in (kindle); the paperback version will be available soon.