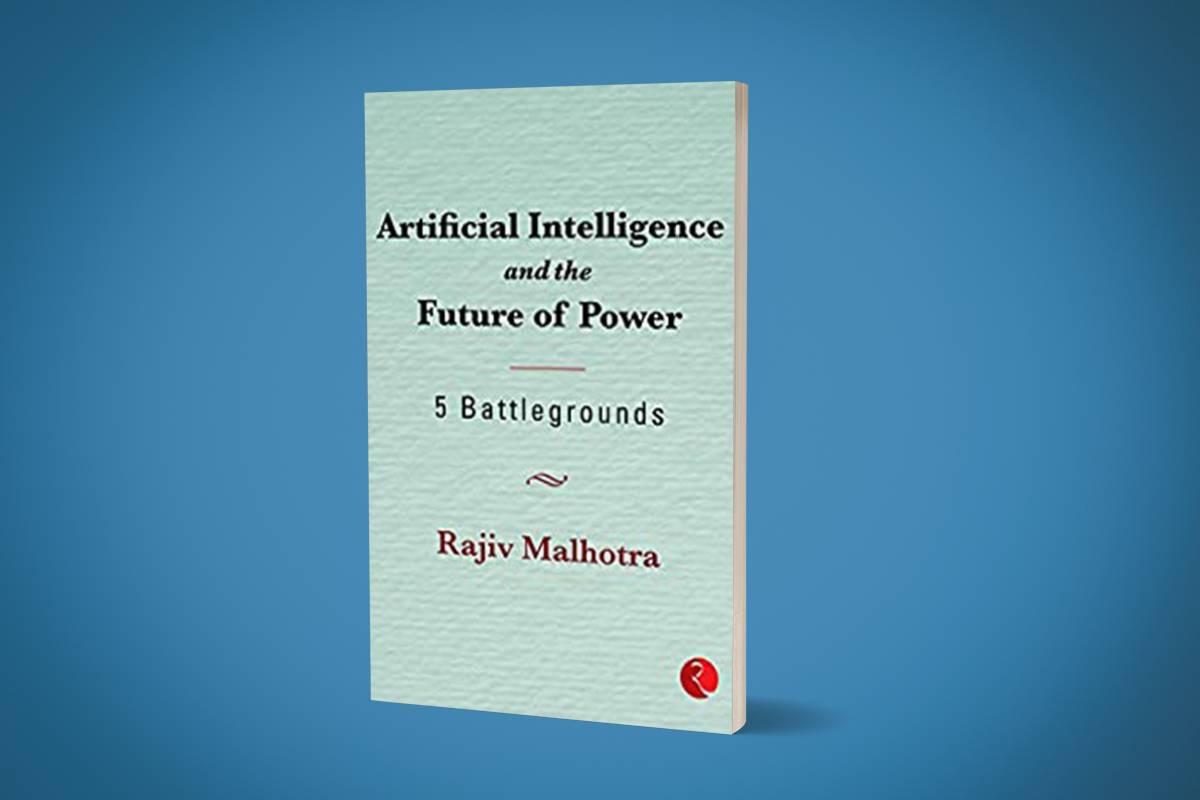 I will start with a quotation from elsewhere:

“Power” is considered an ability, the exercise of which can influence or control behavior, in our context, of people. The term “authority” is often used for power perceived as legitimate by the social structure. The exercise of power is accepted as fundamental to humans as social beings……The quest for mundane power since ancient times finds cultural expression through many forms (e.g., birth / wealth / knowledge / physical strength). The world has always witnessed apparent shifts in power structures…..Power finds expression both as soft and hard. An interesting game of power can be observed in how the global socio-politico-economic narratives have been not only designed but also are consistently under the control of a few…..[1]

And Rajiv Malhotra in this remarkable book educates us about a most dangerous game of power being played by a few.

It is a remarkable book because it is perspicacious, comprehensive, systematically structured, simply written, and easily read.

It is a conceptual tour de force – a ‘purva-paksha (critical analysis) of forces that threaten [our] civiization’.

(Hopefully there will be a softcover edition too, affordable for students.)

Rajiv Malhotra seems to write primarily for ‘public intellectuals’ and ‘concerned citizens’ and ‘non-experts’ (presumably what is called ‘civil society’ these days) – and most certainly his is an invaluable introduction of this subject to them.  He writes to stimulate thought and debate (he promises a sequel for action, though he suggests directions in this book too) – but, frankly, even from his own narrative (‘time is running out for India’), it is clear we do not have the luxury of time to just talk.  We need action.

He details how Big Tech, the USA, and China (with its ruthless ambition) are jockeying for control over the rest of the world, and especially over an India of which they are sponsoring its breaking.  His book favours the sama aspect of chanakyaniti.  But, no, it is now time for bheda and danda.  Therefore, decisions are needed.  And needed fast.

His book is a warning and it must be read by all policy-makers and those holding the reins of power in our polity. Consider his book a set of working papers for our decision-makers.

In particular it must be read by:

The Prime Minister and the Ministers responsible for Defence, External Affairs, Education, Employment, Finance, Commerce, Home, Industry, Information, and Law. By the National Security Advisor and by the Chief of Defence Staff.

(And all of them reading it will ensure those subordinate to them will read it too.)

By the proponents of ‘Constitutional morality’.

By those of our political representatives who, in legislatures, prefer exercising their brain rather than their brawn.

By educationists, and in Indian think tanks.

It must be read by all Indians concerned with the future of our country, of our children and of ourselves.

This is a war, as the subtitle of the book tells us.  If Sanjaya had divya-drishti, Rajiv Malhotra has an eagle’s eye.  He scans for the reader the battle weaponry and array of the fighting powers.

He opens with an introduction and an overview of what Artificial Intelligence (AI) is all about and then he details each of the battlegrounds. He starts with the broad context of education and employment and their determination by ‘data capitalism’.  Then, geopolitics and the ‘hard power’ that determines it (one is reminded of jiski lathi uski bhains). The third is ‘the moronization of the masses’ (surely the lesson behind Juvenal’s panem et circenses has been well-learnt by Big Tech). The fourth is ‘the metaphysics of consciousness’ and a psycho-cultural analysis that ends with the ‘crash of civilization’ (the literal de-humanisation of the masses into ‘happy morons’).  And, finally, India as a battleground.

We are familiar with the phrase Samuel Huntington made popular – ‘the clash of civilizations’. Yes, there is a clash but, for us, the clash is between dharmic civilisation and the asuric ones who define us as their enemy.  Ours sees all creation as interconnected (Malhotra refers to ‘Indra’s Net’); asuric civilisations see creation discretely, to be subjugated by the human. Power in the former is to be sought ultimately over oneself; in the latter, over others.[1]

This is something we still choose not to recognise.  The asuric civilisations fight with normative values radically opposed to ours. Theirs are to conquer or kill, their ethos is adversarial and absolute; ours are to adjust or accommodate, our ethos is consensual and contextual.

Let us never forget that nowhere, but nowhere, in the world where these asuric civilisations (including their so-called secular derivatives) have conquered have they allowed a meaningful survival of any earlier civilisation.  There is not one significant exception to this worldwide historical fact. India is the last major bastion of a non-asuric civilisation. For a thousand years they have been trying to conquer us, and we are fighting with our backs to the wall.[2]

Artificial Intelligence, as Rajiv Malhotra proves, is just their latest – and currently most powerful – weapon against us.

The India of which Malhotra writes he calls tamasic, ‘at best a poor imitation of the American dream’, a dream he notes which in America has become a nightmare with its increasing ‘deaths of despair’.  This is an expected expansion of what has been described elsewhere as ‘the Other America’.  For India, he details our apathy, ignorance, naivete, foolishness, denial, and self-delusion. He details the selfishness of our elite the ambitions of too many of whom are only to be compradors for Big Tech and the West – and we groom our youth to be servitors to them.   Malhotra seeing digital existence as being ruled through the agency of ‘Google-devata, Facebook-devata, Twitter-devata’, we can see Big Tech as Kamadeva, to whom we willingly enslave ourselves.

We are, Malhotra shows, welcoming our re-colonisation – ‘If data represents national wealth, India is for sale’.

There are some recent glimmers of hope but we still are blinkered by our inferiority complex for the West and by ‘the fantasy of having a Western identity’.

Rajiv Malhotra is an intellectual kshatriya.  He argues as ‘a patriotic Indian…..a spiritual person with a strong foundation in Vedanta, physics and computer science’ (and there is an eloquent discussion of Vedic Social Science).  He is no Luddite, but he shows quite clearly that, for India to regain control over AI, we must re-discover ‘our metaphysical roots in dharma’.

Towards such an end, he wonders whether the social engineering practised by China and the USA through the ‘gamification of society’ cannot be used in India to ‘install Vedic principles in society’.  It will be intriguing to see whether and how he deals with this in the sequel he intends to this book, because this requires the formulation and enforcement of dogma (he says ‘non-negotiable principles’, but a footnote admits a conceptual difficulty), whereas the foundation of the dharma is in its ratiocinative freedom.[3]  Such freedom of the intellect is entirely antithetical to the asuric objective, strategy and technique, though the latter finds support from amongst those of us who would define our dharma through ‘essential rituals and practices’ they themselves adjudicate!

There are conundrums arising from some juxtapositions in the book. Thus:

How do you reconcile a Vedic conception of the human (‘’with the goal to maximize good karmas’’?) with a reductionist conception of humans as ‘biological algorithms’, humans as machines, ‘the so-called human machine’?  Indeed, with human-machine hybrids, with machines driving humans, with the machine as human?[4]

How do you reconcile what Malhotra points out as the Vedic isomorphism of the human body and cosmic body, of the human mind and the cosmic mind, of yatha pinde tatha brahmande with, again as he points out, the reductionist ideology that any unity we see is synthetic, false and artificial?

How do you reconcile a Vedantic conception of the self (aham brahmasmi) with the self ‘simply an identity that serves the pragmatic function of competitiveness’, and with ‘the battle for hijacking the self…already being won by AI’?

‘The ultimate effect of this technology is to breakdown individuals into fragments in such a fundamental manner that it undermines their integral unity and selfhood because no unified center of being exists in this model.’  Exactly so.  It makes us, what has been pointed out elsewhere, ‘enucleated universes’.

How do you reverse our moronism?  ‘The phenomenon of moronization of the Indian masses originated at least one thousand years ago’.  How do you combat what has been building up over a millennium when our Constitution – rooted, as Malhotra notes, in the West – is designed to encourage the Breaking India fifth columnists into perpetuating our dhimmitude and macaulayism, into our remaining morons?[5]

So, how will it end?

‘At some point the elites will argue their case for depopulating the earth…..Depopulation will eventually lead to a new equilibrium and an entirely different world’. This will be a world of ‘AI-based digital systems’ controlled by that elite to serve its own ends; an elite that begins ‘to perceive the masses as a parasitic liability’; an ‘AI-based utopia’ for a few, emerging ‘after several decades of this digital genocide of sorts to reduce the population painlessly’, viewing ordinary humans ‘as no more than specimens in lab studies, slaves and beasts of burden, or pets…’.

Then there is the Covid-19 pandemic which Malhotra sees as a ‘hinge point’ in human history. He sees the proliferation of the use of AI in dealing with the pandemic as ‘a great leap forward in the march of AI’ and, says he, it could also be an opportunity for India to ‘leapfrog ahead’.  Indeed, it will be instructive to understand the interplay of culture and AI in pandemic management in the widely different USA, China and India, with widely different pandemic outcomes.

In sum, digital capitalism, the re-colonisation of the world as digital colonies, digital fascism and the colonisation of (what remains of) the human mind – Rajiv Malhotra’s book shows the onslaught is already well under way.

If they have not already done so, our decision-makers must also read three classics: Aldous Huxley’s Brave New World, George Orwell’s Nineteen Eighty-Four and EM Forster’s The Machine Stops. The methods and their expression are different but the motivating principles have not changed, and you can identify their parallels quite easily in Rajiv Malhotra’s book.

The USA, China and Oceania, Eastasia.

AI as a technopoly, and The Machine as Deity.

Rajiv Malhotra quotes Vladimir Putin – ‘Artificial Intelligence is the future…..Whoever becomes the leader in this sphere will become the ruler of the world’.

How is ‘world ruler’ to be defined?

Malhotra shows how the asuric civilizations define it.  A dharmic civilization would have it as ‘vishvaguru in a Vedic sense’, and alert, not complacent.

‘The civilization that was once a world-class knowledge producer and exporter has become the biggest importer and consumer of foreign products and services….’.

And there you have it.  That, eventually, it is about power, and who wields it over whom and how.

‘Decolonising AI is an absolute necessity for India to be a viable nation.’

Events are overtaking us far faster than we can consciously react or adjust to them.

AI is ‘a strategic weapon’.  Will India be able to wield this astra?

Malhotra calls for a Minister of Digital Affairs, and one hopes such a worthy will have read this book.

He reminds us of lessons of the Ramayana and the Mahabharata, that ‘soft power is always contingent on hard power’.

There is a third lesson of which we need to be reminded.  In making their decisions, our decision-makers would do well to remember Srikrishna’s advice to Arjuna: