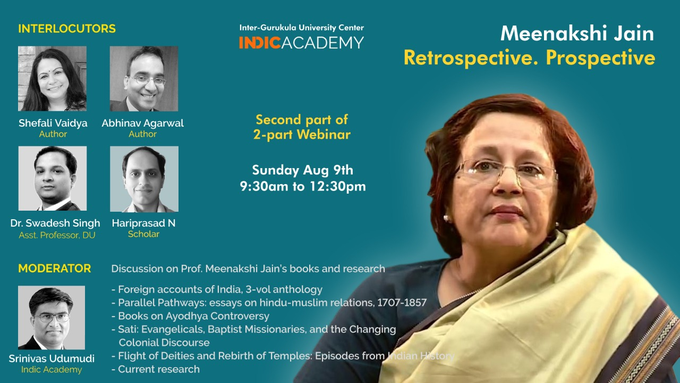 Meenakshi Jain: The Lady Who Inspires

Recently, Padma Shri awardee Meenakshi Jain sat down with Shefali Vaidya to talk about history writing in India, and her journey as a researcher.  Her books are magnificent scholarly works that will without doubt stand the test of time, but as we are living in the age of social media, a video interview review might become the window that may steer curious youngsters and readers to her works.

What makes one study history? Here Jain’s own words will resonate with many.  It was her own desire to understand the truth and to educate herself first.  This seems somewhat common, a feeling in one’s bones, to answer the historical question: what is the truth? All too often we find social justice warriors and arm-chair commenters launch into subjects in which their own research is appalling, built over mainstream media memes and questionable idealism. But, fortunately, we have also found a few individuals going on the long difficult road of finding out for themselves, surveying available material from multiple perspectives, and putting it on record.  Ms Jain also admitted her shock at being ostracised, and facing extreme difficulty in getting published as recently as 25 years ago.  On Twitter recently, authors such as Sanjeev Sanyal, Amish Tripathi, Abhinav Agarwal, and several others too, have offered their own difficulties at the highly nepotistic maze that is the publishing industry, but one must push on, and it is the public and history that will appreciate such efforts at great personal cost to these researchers.  The rewards do not come overnight.

Why did Hindu society survive at all?  With wave after wave of ISIS-imitative medieval Islamic invasions behind held off or survived through horrors, next would come another destructive wave of European church led or inspired Abrahamic conquests into India. They would be accompanied by dubious propagandists and historians.  Here Jain speaks of the values and resilience of Hindu society, and how these percolated to the individual level in our villages with a high sense of service (seva) and family.  A strong identity and connectedness will only keep the fire burning to uphold our way of living and ancient traditions.  It is here that that we understand why education policy is so important.

How do these liars persist in academia?  Here Jain mentions how a handful of scholars could hold history and the country to ransom for decades, while holding off the truth through their control of media and a compliant political leadership.  The recent SC verdict on Ram Janmabhoomi could have been delivered decades ago, with muck-raking false scholarship from the Liberal-Left combine in India delaying what should have been the normal and correct outcome.  None of these liberal-marxist-islamist “scholars” had the integrity to admit they lied, even as they sent their ill-prepared students to the Supreme Court.  These students had become professors and perpetuated the lies, to the point where even the SC would call them out as opinions, not facts.  This is what happens when intellectuals have been divorced from their heritage, and become angry aggressive saboteurs of truth.

Does social media help? Jain offers this advice to the curious and the diligent: that it is very important to rediscover the history of one’s region, as one will have access to the local language and culture.  People can then bypass the establishment, and put their findings on the internet and other media.  This remains critical as Ms Jain echoes what many of us are still keenly awaiting, with a sense of shock, that the education system remains the way the Left made it decades ago.

There is a lot more in this 80-minute video, and its viewing is highly recommended, like all discussions where Ms Jain is present. The interviewer Shefali Vaidya may be a half-generation behind as part of the next wave of public intellectuals, and her questions really do bring out Meenakshi Jain’s vast research.  The questions Ms Vaidya asks are sharp, and indicate that Ms Vaidya herself is a keen devourer and disseminator of such valuable scholarship.

A Very Short List of Other Videos Worth a Watch:

In Conversation with Meenakshi Jain (with Rajeev Malhotra)

Sankrant Sanu on Why India is Still a Colonial State

Shefali Vaidya on The Goa Inquisition

Dear reader, which are your own recommended videos?  Please post your comments.

Where Lions rise against Jackals: Flight of Deities, B. V. Rudhraya, June 2019, yourawesomeindia.com