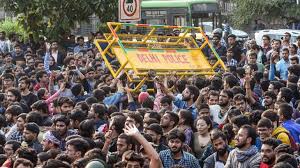 It is useful to recognize that the JNU was started not as a center of higher education but as a plum for the Leftists, notably the Communists for Indira Gandhi to gain their support. As to be expected it has now become a base for anti-national propaganda, especially directed at its Hindu tradition. This explains how its unions, close to the Congress-Communist nexus has become a Pakistani outfit. By sponsoring students with lucrative scholarships, some faculty members are using the university and the students for anti-national propaganda.

Needless to say its humanities faculty was packed with communists and ‘secularists’ thanks to decades of Congress rule and control.

These scholarships amount to Rs30,000 (~USD 420) per month in many cases, a good deal more than the salaries these people could get upon graduation, especially in the humanities. JNU has no science technology programs worth the name. All the activists come from programs like sociology and political science. Here is an example of its anti-India activities.

In 2010 a “JNU Forum Against War on People” was organised “to oppose Operation Green Hunt launched by the government.” According to the NSUI national general secretary, Shaikh Shahnawaz, the meeting was organised by the Democratic Students Union (DSU) and All India Students Association (AISA) to “celebrate the killing of 76 CRPF personnel in Chhattisgarh.” Shaikh Shahnawaz also stated that “they were even shouting slogans like ‘India murdabad, Maovad zindabad’.” (Death to India, long live Maoism) NSUI and ABVP activists undertook a march against this meeting, “which was seen as an attempt to support the Naxalites and celebrate the massacre,” whereafter the various parties clashed. The organisers of the forum said that “the event had nothing to do with the killings in Dantewada”.

In 2015, the JNU Student’s Union and the All India Students Association objected to efforts to create instruction on Indian culture. Opposition to such courses was on the basis that such instruction was an attempt to saffronise education. Saffronisation refers to right-wing efforts to glorify ancient Hindu culture. The proposed courses were successfully opposed and were, thus, “rolled back.” A former student of JNU and a former student union member, Albeena Shakil, claimed that BJP officials in government were responsible for proposing the controversial courses.

More recently they have organized programs calling for the breakup of India and secession of Kashmir, now adding Himachal Pradesh. Here is a brief account.

On 9 February, a cultural evening was organized by 10 students, formerly of the Democratic Students’ Union (DSU), at the Sabarmati Dhaba, against the execution of Afzal Guru and separatist leader Maqbool Bhat, and for Kashmir’s right to self-determination. But it soon went beyond self-determination to Azaadi, or turning it into an independent country, including Himachal Pradesh.

JNU administration ordered a “disciplinary” enquiry into the holding of the event despite denial of permission, saying any talk about country’s disintegration cannot be “national”. The Delhi Police arrested the JNU Students’ Union President Kanhaiya Kumar and Umar Khalid (pictured) on charges of sedition and criminal conspiracy, under section 124 of the Indian Penal Code dating back to 1860.

The arrest soon snowballed into a major political controversy, with several leaders of opposition parties visiting the JNU campus in solidarity with the students protesting against the police crackdown. This prominently included Communist leaders and the Congress leader Rahul Gandhi and others. More than 500 academics from around the world, including JNU alumni, released a statement in support of the students. In a separate statement, over 130 world-leading scholars including Noam Chomsky, Orhan Pamuk and Akeel Bilgrami called it a “shameful act of the Indian government” to invoke sedition laws formulated during colonial times to silence criticism. The crisis was particularly concerning to some scholars studying nationalism. On 25 March 2016, the Google Maps search for ‘anti national’ led users to JNU campus.

The most recent riots, wrongly called ‘protests’ in which the Vice Chacellor’s office as well as security personnel were attacked, began on November 10, 2019, the day after the Supreme Court announced the resolution of the long standing Ayodhya dispute allowing the building of a Ram Temple at the site. Seemingly the riots, euphemized as protests, was over fee hikes. Its anti-Hindu colour was evident when the rioters went on to vandalize the statue of Swami Vivekananda including obscene comments on it.

This became clear when the riots-protests continued even after the JNU Administration rolled back the fee increases. Also, the Azadi slogans reappeared even though they were totally irrelevant to the fee hikes.

It is clear that were its origins and intentions, the JNU is no longer functioning as a bona fide university. If anything its intentions and activities are decidedly mala fide.  Even Delhi has major problems that need serious attention: pollution, water crisis, housing shortage and the like. The JNU shows little interest in these compared to its interest in political activism. There is no reason why tax money should be used to fund them and their faculty sponsors. Worse they seem to have little concern for national security or even the law of the land.

The situation cannot be allowed to go on forever. Dr. Subramanian Swamy has suggested that the JNU should be closed down for two years and reopened after things have been set right. I feel this addresses only the symptom, relating to the recent protests-cum-administrative incompetence, and not the heart of the problem. Even if Dr. Swamy’s suggestion is carried out, there is no assurance that the problem will not reappear at JNU or other Central institutions at a different time or even at JNU itself.

The solution in my view is to denationalize these centralized (or public sector) universities by selling them off to private bidders including religious foundations. Now, Hindus are not allowed to run educational institutions though their record as seen with the Benares Hindu University and the Venkateshwara University (Tirupati) happen to be excellent. But it was the anti-Hindu prejudice of Nehru’s Congress and the Communists that allowed only minority institutions to be set up and run.

It is now recognized that private companies run better than government organizations, which led to denationalization (or disinvestment) of many public sector units. The same solution could be applied to central (or public sector) universities like the JNU. Their projects and centers can be funded by appropriate organizations as needed. The Jet Propulsion Laboratory at the California Institute of Technology is funded by NASA. I myself ran a research center at the University of Houston devoted to AI (artificial intelligence) and robotics.

To begin with, the IITs, IIMs, AIIMS (medical sciences) may be exempted as they seem to be running smoothly. But it is necessary to bring accountability into central universities, beginning with the JNU. They should be encouraged to find sponsors for their programs and activities as is done in the sciences and other professions. No one should have a free ride at taxpayers’ expense.

This article is re-published with permission from Dr. Rajaram’s blog.