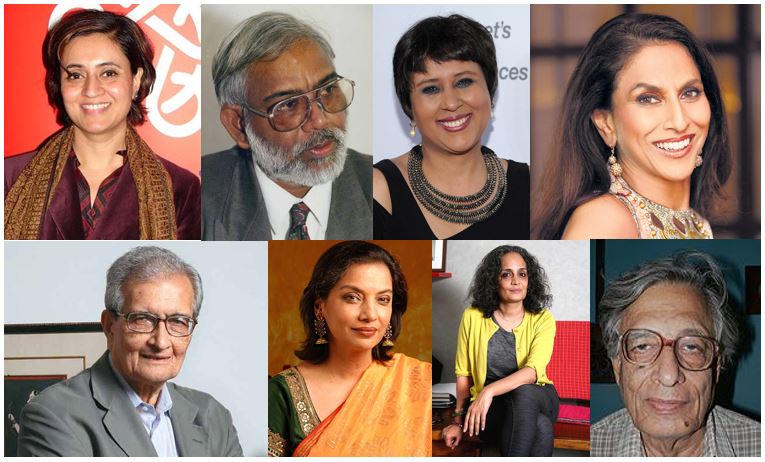 Why Indian Liberals Do Not Leave

We are now almost two months post the Lok Sabha 2019 elections and have seen a barrage of “analyses” of the return of a non-liberal non-left government to power. Some of this has taken the form of the usual apologetics about the demise of an “idea of India”, and the precarious situation of our elite Westernised Indian liberal writers in a “saffronized India’ that has become a “polarized” “lynchistan”.

Voters used to following elections abroad will remember the common threats issued by famous public intellectuals if undesirable leaders came to power.  Whether George W. Bush (“Dubya”) or Trump, “I will leave the country” was a common threat issued by these highly mobile globalists.

Strangely, other than a few thousand HNIs (high net worth individuals) that are anyway globally mobile, few Americans migrated to Canada, and at last count, India still has seen no major departures of its liberal journalists and grieving actors, some of whom in any case are foreign citizens.  Two things should be considered when exiting their beloved India: how to thrive abroad, and why they might not leave anyway.

Given the liberal secular track record in India, it might be a wise idea to attempt the same bag of tricks abroad.  Here are just a few.

Encourage Anti-Nationalism. Encourage Americans to be anti-American.  Or Brits to be anti-Brit. Or is it only in India that they can implore their Anglophone fan base to think of treachery as cool.  Surely Mahua Moitra will put principles above losing a few of her Manhattan friends as she thunders about why it is ok to be anti-American?

Encourage separatism.  Get part of Texas, New Mexico and Cal to merge back with beloved Mexico?   Or create an island of Indian “sort of Hindu” liberals in some exit off the NJ turnpike?  Encourage flag burning.  Khalistan on the NJ turnpike or in some Canadian suburb just off “Terrano”.

Find an American or British Dalit.  Avoid talking about aboriginals (Australian Dalits?).  That would be too obvious.  But also avoid mentioning that 34% of India’s Dalits voted for the BJP, or are just as likely to actively participate in Hindu yathras.   Perhaps a sub-section of the working poor American under-class of European ancestry could be the American Dalits they desperately need, from small town America, railing against the coastal and urban “whites”?

Convert.  So concerned with “freedom of religion” in India, why don’t they just officially opt-out of being Hindu?   Another alternative would be to push Gandhian level appeasement of the most “pious” Islam in the name of sarva dharma sambhava.  Perhaps some parts of the Midwest could become an Islamic safe space, with the grand prize of Chicago and the entire Midwest by 2120 CE?  Or just come out of the closet in religious terms, as it is safe finally to stop being a crypto-convert, and adopt Christian names fully?

Insist of Islamic immigration.  Treat Rohingyas as victims who need to come to not India but the United States.  Not their Bangladesh home, and certainly not Pakistan or Saudi Arabia.  An “America ke tukde honge, Inshallah” (“Let’s break up America into pieces, Inshallah”) could be catchy on several Ivy League campuses and State Universities, and fit in well with the Ilhan Omar and Linda Sarsour bandwagon, surely?  Amartya and Pankaj could provide cover with “Free Wales, Inshallah”.  Get Quentin Tarantino to pull an Anurag Kashyap, and write petitions on intolerance.  A lecture on comparative religion by Ira Trivedi but to a UK audience might have a reaction similar to one at home though.

Encourage beef eating in the west? Might sound quite odd coming from an Indian immigrant, but food pics from In-n-Out and 5 Guys could give them new corporate sponsors at the very least.

Teach English. This might sound surprising to most Indians who don’t speak English by default, but compared to actual native speakers, the Indian “native speaker of English” stands out as a good writer, in an Indian crowd. Their English is good in India, but in the west, it isn’t that good, where most would need to seriously up their prose.  However, by encouraging immigration, they could become the teachers of a whole generation of Americans from an entirely new culturally alienated demographic.

But who will they subvert?

As dutiful natives of the Empire masquerading as Indians, their USP is to be Indian living in India, repeating the shock-and-awe tropes of an endlessly regressive backward India.  What good would it do if the Indian liberal were to sit in the Anglo-world and turn the gaze onto dysfunctional Britain or America? Which NGO would fund them? No use being a traitor and living in England – very few slots and they are taken, mostly in academia, where again, deeper qualifications are required. They wouldn’t last very long.

To which audience can they fear-monger? Instead of Indians, will they tell Americans how racist, misogynistic, genocidal and Islamophobic they are? How about telling Brits that grooming gangs are only coincidentally heavily Pakistani, and tolerance is the need of the hour. All these years conning Indians and the world about how racist Indians are (or that caste is apparently race), it might be a stretch to find them at the forefront of black equality; our African-American brothers might not quite believe them.  And would they pick on the British aristocracy, or the Mayflower, Manhattan and Beltway elite in the US?  Their track record with the Nehru-Gandhi dynasty does not suggest confidence.

But other markets might be explored given their penchant for talking up “lynchistan”.  Perhaps a base in Saudi Arabia or Iran?  However, it will come with a limitation that they can’t really push liberalism, and certainly not feminism.  And moving to China or Xinjiang province might not be lucrative or welcoming.  Would an Aakar or a Ms. Jaising get the sort of leverage and funding in China, or would they find their visas cancelled?

Better to stay in India and talk in a “posh” accent about the regressive “Hindoos”, and encourage them to be anti-national.  Since Hindu libs are cryto-converts and westerners anyway, they would not dare be rejected by westerners for ripping their rituals. Smarter to rip Indian, typically that means Hindu, rituals since they are not afraid of being rejected by those they have already rejected themselves.

The Nehruvian-“Gandhian” Lutyens ecosystem has no foreign replacement.  Used to decades of being rewarded for their borrowed analyses and parroting, who would hire them outside India?  There are only so many slots that can be filled by a few Pankaj Mishras.

Not history literate. Regardless of how one views William Dalrymple, he is able to sit in India and write semi-competently (or distort highly competently) about India’s history.   Can any of our liberals do the reverse, write critical  and scholarly work on America or Britain’s history? No.  Pankaj, Amartya, and 99% of Indians in American liberal arts academia do not produce any deep critique of their country of residence.  At best, it is the establishment approved “imperialism is bad” trope, which ruffles no real feathers.  Their value is in belittling their country of origin, ideally while residing in India.  Other than election cycles perhaps, their knowledge of their foreign utopia is even worse than it is on India, which isn’t saying much given that many are illiterate on India’s history, one reason why they hide behind tropes and a liberal lens.

Not qualified enough.  Yes, this might sound strange, but the ticket to a lucrative career outside the “third world” was the medical field, then Wall Street as bankers and economists, with IT and other (mostly) technical fields opening up over time.  Indian journalists relying on their liberal arts backgrounds can still make ends meet abroad, with the help of their spouses (mostly male, let us not worry about “equality” here) who will pick up the slack as globe-trotting expats, fat cat bankers, or technical experts.  Running 7-11s along the inter-state is too “jantha”. Staying back makes financial sense, as with their considerable salaries in India, a spouse’s supplementary income is not even required.

Not Hindu enough.  For decades, India’s spiritual and cultural offerings have been monetized on an industrial scale.  However, these Hindu slots have been taken already, not just by opportunistic westerners, but also by real yogis, experts on Sanskrit, meditation and Indian arts.

Secondary citizens. Nothing like a random incident of some unexpected racially motivated contempt to remind them that they will remain second class citizens in their dream western destination.  More interesting would be to be mistaken for a Middle Eastern Muslim.

Loss of class and status.  As one writer lamented, perhaps in jest, many don’t leave India for fear that they won’t be able to “exploit household staff” (carefully avoiding using the term naukar or servant; “domestic workers” also preferred, as some liberals helpfully correct us). But make no mistake, remaining in India at the still exorbitant salaries some can command gives them a prestige, a pedestal they crave, a first class seat they won’t give up.  In NY or London, they’d be not really anybody, with no one to write about condescendingly.  Too poor to be invited by wealthy foreign Indians into free parties; here they get choice invites, memberships and lit fest marquee slots.

All is not lost though!  They could write about dogs, cats (an oddly common pair of fixations), climate change, and other approved topics if they moved.  But again, it won’t pay their bills, unless they live in their spouse’s basement (they won’t advertise their dependence in any case).  Or they could stay in India and do a volte face and save the cow.  One can dream.

Conform. Over there, do we find any Indians creating trouble for the entrenched establishment? Good luck.  Most if not all are model citizens, playing well within the rules, who bring real skills to the table, and don’t make too many demands that are out of the mainstream.  Good tax paying conformists who put their kids through good schools and stay out of trouble.

Is it really a surprise they don’t leave?  Let us be clear. They don’t stay “because despite everything, this is home”; rather it is because they’ve never had it so good.  It is in India that they have total freedom, to be what they love: contemptuous and condescending.  A lucky few are excessively well paid to do so while screaming “fascism”.  Enjoy it while it lasts.  By the track record of other sell-outs with discarded roots, the seasoned veterans might last a little longer even as social media slowly makes them obsolete.  For their next generation of useful idiots, however, lay-offs and unemployment await, a not so bright future.

The Hypocrisy Of The Indian Elite And The Reactionary Brutality Behind Their Liberal Veneer, Ruchir ‘Ferrero’ Sharma, April 2019, Swarajyamag.com.   Definitely worth a read!

One Reply to “Why Indian Liberals Do Not Leave”