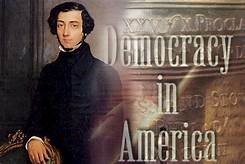 Democracy in a new nation

In 1831, a twenty-six year old French nobleman by name Alexis-Charles-Henri Clérel de Tocqueville landed in America carrying a commission from the French monarch Louis-Philippe (of the House of Orlèans) to study the American prison system. Tocqueville dutifully completed his mission and published his report on his return to France two years later where it is began to  gather dust. He wrote another work based on extensive travels in the new country, called De la démocratie en Amerique (Democracy in America) which appeared in two volumes in 1835. It has remained a classic.

There is no single work on Indian democracy comparable to Tocqueville’s Democracy in America. India of the 1990s was also vastly more complex than the United States of the 1830s— a multi-religious society with a power sharing hierarchy based on various parameters, while America was largely Protestant Christian, but with significant social and economic differences based on landholding and slavery. While there is no Indian version of Tocqueville’s book, the void is partly filled by two works that in different ways look at India in the fifth decade since independence. These are The Idea of India by the political theorist Sunil Khilnani, now at King’s College, London, and India: A Million Mutinies Now, by the well-known observer of India and the world, V.S. Naipaul.

It is not the purpose here to discuss these much-reviewed books, but examine the insights offered by two serious thinkers of different backgrounds in the light of the experience of the succeeding twenty years.  Sir Vidia Naipaul is, by any measure,  a creative writer of the highest order who studies societies by looking at individuals in their historical environment.

A Million Mutinies Now is Mr. Naipaul’s third book on India. It is not marked by the pervasive sense of gloom of his earlier works on India, reminiscent in some ways of the brooding genius of the Greek tragedian Aeschylus, or his modern counterpart Eugene O’Neill. There is a hint of optimism—that one is seeing a civilization coming out of a millennium-long historical nightmare. He even sees the Ayodhya movement and the 1992 demolition of Babar’s Mosque as part of this historical awakening. This has earned him the charge of being a ‘Hindutva spokesman’, but Mr. Naipaul has not relented from his position.

(This is not the place to go into different sides of the complex Ayodhya dispute; those interested in archaeological and other facts relating to the case are advised to visit here.)

It is not easy to describe a writer as versatile as V.S. Naipaul in a few words. His non-fiction works are often described as travelogues but that seems inadequate. (His fiction is not germane here.) This writer sees him as an observer of societies— of their ebb and flow against the background of their historical experience. Above all he looks for causes for the present in their past— the stamp of history on society. The Indians’ supposed lack of a sense of history is what infuriated him in his earlier books on India (Area of Darkness and A Wounded Civilization), while he sees signs of a historical awakening in A Million Mutinies Now.

In his non-fiction work Naipaul is said to adopt an ‘anecdotal’ approach— of describing societies and institutions (like caste) through the experience of selected individuals. This is only partly true, for he never loses sight of their historical background. As a result he is interested not only in the subject, but also the experience of ancestors going back two or three generations. In effect he portrays scenes using ‘case studies’— to borrow a term from business school parlance.

The result is wonderful literature especially in the hands of a master like Naipaul, but also one that can seduce the reader into thinking that the cases presented are typical of the community as a whole. This may not always be so. Different individuals may share the same history but how they react to it can and does vary from case to case. This writer happens to come from the same region and social background (South India) described in some detail in A Million Mutinies but feels that the portrayals convey a society more rigid than the one his or even his parents’ generation were part of.

The book rightly devotes considerable space to the influence of the Dravidan Movement, especially in Tamil Nadu. Mr. Naipaul has little to say on the philistinism of the Dravidian Movement, which is what strikes one coming from a neighboring state (like the present writer). Tamil Nadu has been one of the great centers of the performing arts: Tanjore, Chennai, Srirangam and other centers played a major role in development and nurturing of classical music and dance. Dravidian ideologues denounced them as ‘Brahminical’, replacing it with vulgar film music and dance. It is no coincidence that several Dravidian leaders, including M. Karunanidhi happened to be closely associated with the film industry. (In some ways, the Dravidian Movement can be compared to Mao’s Cultural Revolution.)

In attacking the fine arts and Indian tradition as ‘Brahminical’, Karunanidhi and his colleagues were taking a page out of a long standing tradition begun by Christian missionaries going back at least to Robert de Nobili in the 17th century. E.V. Ramaswamy Naicker is said to be the founder of the Dravidian Movement, but the real founder was Robert Caldwell (1814 – 91), Bishop of Tirunelveli in Tamil Nadu. He promoted the Aryan-Dravidan theory claiming that Dravidians were the original inhabitants of India until driven south by the invading Aryans. This crackpot theory has been discredited by archaeology and now genetics, but remains the lynchpin of the Dravidian ideology. Politicians like Karunanidhi have gone to great lengths to preserve this myth, even to the extent of generously supporting mercenary scholars like Asko Parpola of Finland to give it a veneer of scholarship.

Notwithstanding his discredited theories, Bishop Caldwell remains a revered icon in Tamil Nadu today. At a conference in Bangalore a few years back, this writer objected to a scholar from Tamil Nadu heaping indiscriminate praise on Caldwell’s work. The speaker ignored the objections but later admitted in private that he had to praise Caldwell in order to survive in Tamil Nadu. This kind of politicization of scholarship is not unknown in other parts of India. In this respect, India remains a feudal society.

In A Million Mutinies Now Mr. Naipaul gives a vivid picture of the formidable E.V. Ramaswamy Naicker (1879 – 1973) known as ‘Periyar’ (Elder) with all the contradictions of his complex personality. To begin with, this champion of the downtrodden was not a poor Tamilian but a Kannada speaker from a wealthy family. Ms. Jayalalithaa, the former chief minister of Tamil Nadu, was also from Karnataka and a Brahmin to boot. Her mentor M.G. Ramachandrantoo was not a Tamilian but a Keralite born in Sri Lanka.

The most arresting part of A Million Mutinies Now is the description of the effect on the Muslim psyche of two major events— the 1857 uprising that led to the British takeover of the Oudh (or Awadh) kingdom, and the Partition of India in 1947. The scene of Mr. Naipaul’s narrative is Lucknow, the last light of Muslim culture that was rudely extinguished by the British following the Mutiny. The Partition broke Muslim families resulting in disruption and disillusionment. Many migrated to the Land of the Pure (Pakistan) only to return, their refined sensibilities unable to cope with the crude materialism of the Punjabis. These included artists of the highest rank like the great singer Bade Ghulam Ali Khan. (He was not from Lucknow though Lucknow has a great tradition of classical music.)

The social loss following the Partition when much of the Muslim elite left for Pakistan is understandable, but what is baffling is the deep resentment still held against the British for destroying their dream city of Lucknow and the refined culture it represented as the capital of Oudh (or Awadh).Mr. Naipaul gives a vivid and sometimes poignant account of the hurt still felt by many Lucknow Muslims at the loss of paradise.

He is in his element in describing the world as seen by them and its clash with reality (‘End of the Line’). One can understand their agony— their sense of defeat and dispossession, but the atavistic attachment to a world that disappeared 150 years ago is hard to comprehend. Does one carry this hurt forever— a hurt that time seems powerless to heal? Is it a coincidence that the culture of Lucknow was Shia, with its own memory of the martyrdom of Ali and his supporters in the Battle of Karbala of 610 AD? What a burden to carry!

We now examine the India of Nehru’s vision.

(continued in the next part)