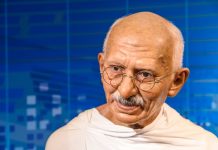 Excerpted from Gandhi, Khilafat and the National Movement by N.S. Rajaram

Preliminaries
The practice of using religion to gain secular ends is of course nothing new. Moses did it; Prophet Muhammad did it as did his modern follower Ayatollah Khomeini. In our own time, Mother Teresa justified her consorting with swindlers and mass murderers for the sake of money with the claim: “I am accountable only to God.” This idea of a higher power that places one beyond the pale of humanistic considerations is the foundation of Semitic creeds like Christianity and Islam.

But Hinduism, Gandhi’s professed faith, has no room for it. As we shall soon see, Gandhi’s answer to this seeming deficiency in Hinduism was to recast Hinduism suitably to meet his political needs.

All religions not the same

This brings us face to face with a little understood fact about religions that has been obscured by the Gandhian slogan of sarva dharma samabhava — from which he (and his followers) concluded that all religions teach essentially the same thing, and are therefore equally valid. This is far from true, for Semitic religions — or prophetic creeds — differ from the pluralistic Hindu tradition in two fundamental respects. These differences need to be clearly understood, if one hopes to make any headway in untangling the religio-political dialectic that underlay Gandhi’s politics (and religion).

This leads to a third feature of creeds of authority: their scripture can become a convenient device for imposing irrational and even anti-humanistic laws and regimes. God, after all, is needed as authority only in such circumstances, not for justifying acts beneficial to humanity.

This holds one of the keys to Gandhi’s political career also: he saw himself guided by a higher force that justified irrational and even anti-humanist policies and conduct. And he invoked a higher principle — ahimsa (nonviolence), to justify positions that could not be defended on rational or even humanistic grounds.

It is my sense that to fashion himself a convenient tool for his politics, Gandhi took the pluralistic Hinduism and gave it a Semitic exclusivistic twist by making ahimsa — or nonviolence — his central creed or dogma. In his hands, Hinduism became a dogmatic religion like Islam, with ahimsa at its center, and Gandhi himself as the Prophet of ahimsa. Like all prophets he could be tyrannical in imposing his beliefs. This took the form of ‘fasts unto death’ to gain his ends — a tactic that amounted to blackmail.

But this creed of ahimsa was selective, and applied only to the Hindus. As one examines his political career, one sees that he insisted that Hindus be true to ahimsa, while he condoned and even rationalized violent behavior by Muslims. This went with his principle of sarva dharma samabhava. Muslims were acting according to the teachings Islam, and the Hindus also had to be true to the teachings of Hinduism — at least his version of it with ahimsa as the central creed. In practice, this ahimsa translated into a complete submission of one side to the demands of the other, making it indistinguishable from appeasement. His notion of ‘tolerance’ was for one side to completely submit to the demands of the other. The following statement by Gandhi, made as far back as 1909 illustrates Gandhi’s attachment to appeasement in the name of unity, and his propensity for combining contradictions with the help of his ‘unintentionally sophistic logic’ — as Sri Aurobindo put it:
“As a man of truth I honestly believe that Hindus should yield up to the Mohammedans whatever the latter desire, and that they should rejoice in so doing. We can expect unity only if such mutual large-heartedness is displayed.”

As Majumdar observed (Volume II, pp 313-14):
The first sentence is one of those pro-Muslim sayings which bore the special trademark of Gandhi and did incalculable harm to Hindu-Muslim unity by putting a premium on Muslim intransigence. It was repeated in 1947 when Gandhi made the proposal, which astounded even his devout followers, that Jinnah should be the supreme ruler of India, with a cabinet of his own choice, which might consist only of Muslim ministers. The word ‘mutual’ in the second sentence is meaningless, as Gandhi never dared make similar request to the Muslims, and they never showed the slightest intention of doing any such foolish thing. Gandhi’s attitude did not change even after the creation of Pakistan.

This would have had the effect of realizing the dream of Muslim leaders like the Ali brothers (pic) — of replacing the British rule with Muslim rule! We shall see later that this seems to have the intention of the Khilafat leaders when they supported Gandhi in his Non-violent Non-cooperation movement which he launched in support of the Khilafat.

All this introduced a strong element of moral relativism in his dealings, with different standards of behavior permitted for the Hindus and the Muslims over the same issues. In practical terms, this became a policy of appeasement rooted in moral relativism — insisting on nonviolence where Hindus were concerned, but tolerating and even rationalizing violence on an unprecedented scale by the Muslims. It was only natural that this should have inflamed animosities leading to violence on a large scale. The Mopla Rebellion, which is discussed next, is a vivid example of Gandhi’s dual stand rooted in moral relativism. As one studies the consequences of his actions, and his equivocal conduct in the face of unspeakable atrocities committed on innocent people, his halo seems to lose a good deal of its luster.

He and the Congress seemed to learn nothing from it. They repeated the folly leading to the holocaust of the Partition. Like the mythical Bhasmasura, he was himself consumed by the violent passions unleashed by his equivocal position on nonviolence. So were a million others, who, unlike Gandhi, had no hand in it. This was a high price to pay for one man’s reputation as a saint — the Apostle of Nonviolence; at the least he was also the Apostle of Moral Relativism.

This is part 1 of the three-part series, Unspiritual Gandhi: Disguising Politics as Religion.  Please do read Part 2 and Part 3.