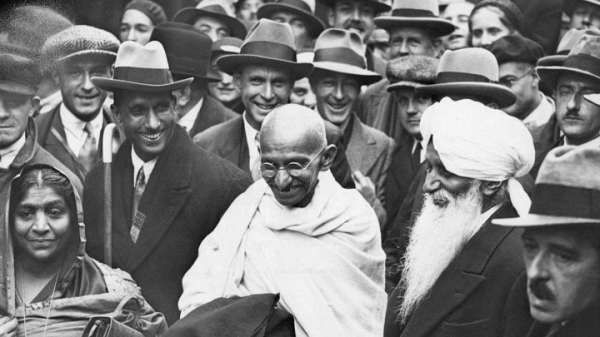 This is part 2 of the 3 part series: Unspiritual Gandhi: Disguising Politics as Religion.  Read part 1 here.

The politics of moral relativism

The point of all this: just as Gandhi’s religious ideas were rooted in his political needs, his ‘spiritualism’ also cannot be studied in isolation from his politics. He and his teachings derive their importance only because of his career as a politician. Take away the politician, there is little left — and that little has nothing to do with India or Hinduism. Most people do not realize how great was Gandhi’s debt to nineteenth century Western pacifists like Thoreau and Tolstoy, and how little his philosophy owed to the Hindu tradition. His most important work, Hind Swaraj, does not contain any reference to a single major Indian work. Sr Aurobindo was one of the few to see Gandhi in his true dimensions — as a Western pacifist in Hindu garb:

Gandhi is a European — truly a Russian Christian in an Indian body. … When Europeans say that he is more Christian than many Christians (some even say he is “Christ of our times”) they are perfectly right. All his preaching is derived from Christianity, and though the garb is Indian the essential spirit is Christian. He may not be Christ, but at any rate he comes in continuation of the same impulsion in him. He is largely influenced by Tolstoy, the Bible and has a strong Jain tinge in his teachings; at any rate more than by the Indian scriptures — the Upanishads or the Gita which he interprets [Sic: misinterprets] in the light of his own ideas.

A more insightful account of Gandhi’s ‘spirituality’ has not been written. The catastrophe of the Khilafat and its aftermath seemed to do little to change his belief; he repeated the blunder with Jinnah and the Muslim League leading to the greater catastrophe of the Partition. The issue here is not merely the division of India, which may have become unavoidable by then, but his conduct in the face of such a great human tragedy. He persisted with his dual standards resulting in untold hardships for Hindu and Sikh refugees, while insisting on the protection of Muslim property. The results could be tragic as the following example shows.

In January 1948, many Hindu and Sikh refugees in Delhi had taken shelter in some abandoned mosques. Gandhi put pressure on the Congress Government to have these refugees evicted from these temporary homes. As a result, a large number of refugees — including women and children — were forced to spend the nights in the cold rain. Such heartless behavior in the service of an abstract principle (which no one understood) only exacerbated mutual hatred already at fever pitch. It is an irony of history that the ‘Apostle of Nonviolence’ was directly responsible for two of the most violent explosions of this violent century. This is inevitable when one selectively imposes dual standards.

While much is made of his nonviolence, his moral relativism was at least as important a part of his religio-political philosophy. Its contribution to history was also incomparably greater. His message of nonviolence has fallen by the wayside — his followers resorted to violence when it suits them — but his practice of moral relativism continues in the form of appeasement in the name of ‘secularism’. This has resulted in opposition to such enlightened policies as a uniform legal code for all. Humanistic reform benefiting beleaguered Muslim women, is the modern casualty.

Gandhi’s moral relativism — of applying different standards to different people — first came to the fore during the Khilafat agitation and the Mopla Rebellion that followed on its heels; it came to the fore again during the Partition twenty-five years later. To understand Gandhi, and his often incomprehensible political moves, we need to come to grips with his moral relativism along with his peculiar sophistic logic. They offer a better insight into his career than his ahimsa, which in any case operated only selectively. It has become irrelevant today outside academic circles.

When Gandhi returned to India from South Africa, circumstances allowed him to rapidly gain ascendancy in national politics. His method was to use nonviolent non-cooperation to gain Swaraj (self-rule). Muslim leaders like the Ali brothers (Mohammed Ali and Shaukat Ali) did not share his vision but simply found him useful. Their main interest was the restoration of the Sultan of Turkey following Ottoman Turkey’s defeat and dismemberment in the First World War. This was known as the Khilafat movement more of which later. Gandhi promised support for the Khilafat in exchange for the support of the Ali brothers and the Muslims of India for his non-cooperation movement.

The Khilafat movement was a disaster in more ways than one. Indian history books (controlled by the Congress) carefully leave out the Khilafat fiasco, or if they mention it all they present it as a unifier of Hindus and Muslims. The reality is entirely different. It resulted in a massacre of tens of thousands of innocent Hindus all over India. It was particularly virulent in Kerala where a Jihad (Holy War against infidels) called the Mopla Rebellion erupted which took several months to put down. To make matters worse for Gandhi, Muslim leaders like the Ali brothers, whom he had sponsored and supported during the Khilafat, publicly humiliated him; Mohammed Ali even said that a Muslim thief was better than Gandhi, simply because of the thief’s faith in Islam!
What was the Mopla Rebellion like to make historians shy away from it?

Sankaran Nair has this to say: For sheer brutality on women, I do not remember anything in history to match the Malabar [Mopla] rebellion. … The atrocities committed more particularly on women are so horrible and unmentionable that I do not propose to refer to them in this book. I have selected a few out of literally hundreds that might be selected from the English and vernacular papers… One narrative is by Mrs. [Annie] Beasant.

This brutality was to be equaled if not surpassed in the holocaust of the Partition, which was the result of Gandhi and the Congress failing to learn from their mistakes. What was Gandhi’s reaction to the Mopla outrages? At first he denied that the atrocities took place at all. But he could not keep it up for long in the face of overwhelming evidence including reports from his Muslim friends. He then equivocated and rationalized. He called the Moplas “God fearing” and said they “are fighting for what they consider as religion, and in a manner they consider as religious.”

This from the Apostle of Nonviolence! It applied to the victims, but the perpetrators could be excused as ‘God fearing’ because they were acting according to their religion which sanctioned violence against unbelievers. It is not easy to find a better example — or worse — of moral relativism. This was too much for Annie Beasant. That spirited Englishwoman wrote:
It would be well if Mr. Gandhi could be taken into Malabar to see with his own eyes the ghastly horrors which have been created by the preaching of himself and his “loved brothers”, Mohammed and Shaukat Ali. …

Men who consider it “religious” to murder, rape, loot, to kill women and little children, cutting down whole families, have to be put under restraint in any civilized society.  It is hardly surprising that the partisans of Gandhism — not to mention its beneficiaries — don’t want to be reminded of the Khilafat or the Mopla Rebellion. It is time, though that we did reexamine this history and its impact on modern India, for it has lessons to offer. But first, what was this Khilafat that simultaneously catapulted Gandhi to the top of the Congress leadership, and had such catastrophic consequences for the country? This is what is examined next.