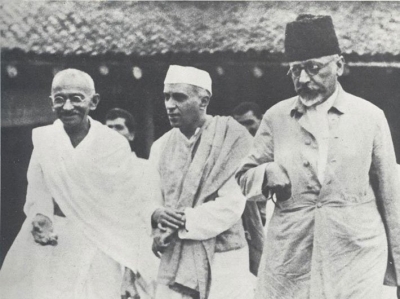 This is part 3 of the 3-part series: Unspiritual Gandhi: Disguising Politics as Religion.  Please read part 1 and part 2.   A previous article covered the Khilafat episode.   Here, additional facets are presented.

The Khilafat agitation is one of the defining events of modern Indian history, but history books today treat it in a perfunctory fashion if they mention it all. Gandhi had a direct hand in the Khilafat agitation. In his Gandhi and Anarchy, Nair makes it central to his evaluation of Gandhi and his politics. Majumdar provides more details. But both assume readers to be familiar with the historical background to the agitation, which may not be true of readers today. So here is a brief account.

When the First World War ended in 1918, Ottoman Turkey, which had fought on the same side as Germany, had suffered a massive defeat. The result was the breakup of the Ottoman Empire ruled by the Sultan of Turkey who had also pretensions to the title of the Caliph or the leader of all Muslims. The defeat of Turkey was seen as a major blow to the prestige of Islam especially by many Muslims and their leaders in India. They formed committees to press the British Government to restore the Sultan in a movement known as the Khilafat.

The Khilafat movement is generally described as a demand by the Muslims for the restoration of the Sultan of Turkey to his rightful office of the Caliph. This is a serious misrepresentation. Muslims outside India did not recognize the Turkish Sultan as Caliph; it was strictly an Indian movement but with a foreign focus. The Turks themselves under Kemal Ataturk eventually drove their Sultan into exile. The last Caliph with a legitimate claim to the title was the Abbasid Caliph al-Mustasim. He had been executed by the Mongol Huleku Khan (grandson of Chengiz) following the sack of Baghdad in 1258.

Recognizing its value as a political symbol, the Mameluk Sultan of Medieval Egypt invited a member of the family to set up a puppet Caliphate in Cairo. These Caliphs were “complete nonentities” — as the Encyclopædia Britannica puts it — and their claim was ended for all time when the Ottoman (Turkish) Sultan Selim invaded Egypt in 1517. Later, the Ottoman Sultans styled themselves Caliphs, but this was a nineteenth century politically motivated fiction concocted to buttress their rapidly slipping hold over the provinces of the Empire. It was a cynical ploy by the Ottomans who had themselves extinguished the last vestiges of it.

The various Indian Muslim leaders of the Khalifat agitation — the Maulvis, the Maulanas and Their Highnesses like the Aga Khan — were not of course unaware of this history. But they correctly surmised that it did not really matter as long it suited their purpose and some useful dupes could be found. Their belief was justified when Gandhi and the Congress launched the non-cooperation movement in support of the Khilafat demand. (One also suspects that the at least some Muslim leaders entertained the utopian scheme of restoring Muslim rule in India, which they believed had been usurped by the British.)

Gandhi’s own stand on the Khilafat betrayed a remarkable degree of ignorance and confusion over the issues. He seemed to be ignorant of both the history and the political situation as it stood at the time of the Armistice in 1919. He seemed unaware of the basic fact that neither the Arabs nor the Egyptians had any desire to be ruled by the Turkish Sultan — let alone submit to him as their Caliph. Syria and Lebanon — formerly under Ottoman rule — were now under French control. It was not therefore, in the power of the British to restore them to Turkish rule, even were they so inclined. And most absurdly, the Turks themselves had no use for their Sultan cum pseudo-Caliph whom they drove into exile. In the face all this, Gandhi’s massive agitation for the restoration of the Sultan bordered on the preposterous.

By no stretch of the imagination can the Khilafat be regarded an issue affecting the nation or Swaraj. In return for his support for the Khilafat, Gandhi obtained, or thought he obtained Muslim support for launching his nationwide nonviolent non-cooperation movement. Islam sets no great store by nonviolence, but Khilafat leaders like Mohammed Ali agreed to support his agitation in return for Gandhi’s promise of Swaraj within a year!

To compound the confusion, Gandhi had gone on to redefine Swaraj to mean support for the Khilafat. In his words: To the Musalmans Swaraj means, as it must, India’s ability to deal effectively with the Khilafat question. … It is impossible not to sympathise with this attitude. … I would gladly ask for the postponement of the Swaraj activity if we could advance the interest of the Khilafat.

So Swaraj, which previously meant self-rule, became transformed overnight into support for the Khilafat! So which ‘Swaraj’ activity was he willing to postpone, and which ‘Swaraj’ had he promised to the Ali brothers within the year? Did Sri Aurobindo not tell us that Gandhi was endowed with a “remarkable kind of unintentionally sophistic logic”?

This is not the whole story of Gandhi’s surrender on the Khilafat issue. This apostle of Hindu-Muslim unity went on to claim: “We talk of Hindu-Mahomedan unity. It would be an empty phrase if the Hindus hold aloof from the Mahomedans when their vital interests are at stake.” This ‘vital interest’ was the restoration of the Khilafat in far away Turkey at the cost of national freedom! On this Majumdar observed (Vol. III, p 50):

If a hundred million Muslims are more vitally interested in the fate of Turkey and other Muslim states outside India than they are in the fate of India, they can hardly be regarded as a unit of Indian nation. By his own admission that the Khilafat question was a vital one for the Indian Muslims, Gandhi himself in a way admitted that they formed a separate nation; they were in India, but not of India.

It is sobering to contrast this sophistry and equivocation on the part of Gandhi (and his followers) with Sri Aurobindo’s ringing statement on nationalism made many years earlier (1908):  “It [nationalism] overleaps every barrier; it calls to the clerk at his counter, the trader in his shop, the peasant at his plough; it summons the Brahmin from his temple and takes the hand of the Chandala from his degradation; it seeks out the student in his college, the schoolboy at his book, it touches the very child in its mother’s arms…There is no room for sophistry here — of being “in India, but not of India.”

There was no room for sophistry in the words of the Khilafat leaders either, that was supplied by Gandhi and his followers like Motilal Nehru and Azad.. Khilafat leaders like the Ali brothers made no secret of their loyalty to Islam above India. As Majumdar records (op. cit. p 53): “In their public speeches they emphasized the identity of the interests of the Indian Muhammadans with the interests of the Muhammadans everywhere in Tripoli and Algeria in preference to those of the Hindus.”

When there were rumors that the Amir of Afghanistan might invade India, Muhammad Ali said: “If the Afghans invaded India to wage holy war, the Indian Muhammadans are not only bound to join them but also to fight the Hindus if they refuse to cooperate with them.”

This extraordinary statement was probably rooted in his belief that the Muslims had a right to rule India after the British usurpers left, and it was the duty of the Hindus to support them. Still Gandhi supported his ‘dear brother’ Muhammad Ali for being true to his religion! Gandhi’s conduct during the Khilafat seems to knock the bottom out of any claim for his being the ‘Father of Indian Nationalism’.

The lesson of the Khilafat fiasco may be summarized as follows: it showed that the enthusiasm of the Muslim masses in India could be aroused only through appeals to religious symbols of an alien culture rooted in an alien land. (To Muslims, only the sands of Arabia are sacred, as V.S. Naipaul put it.)

In order to gain their support for his non-cooperation movement, Gandhi had to go to a discredited foreign institution, and associate himself with characters like the Ali brothers who had no scruples over inviting the king of Afghanistan to invade India in defense of Islam. In the bargain Gandhi had to redefine Swaraj itself, changing it from a symbol of nationalism into a pan-Islamic theocratic symbol of no relevance to India. It is only natural that the whole issue should be mired in obscurantism and sophistry.

The following single statement by Gandhi demonstrates both Gandhi’s bargain: save the cow for the Caliph

I claim that with us both the Khilafat is the central fact, with the Maulana Muhammad Ali because it is his religion, with me because, in laying down my life for the Khilafat, I ensure the safety of the cow, that is my religion, from the knife of the Mussalman. [Sic: He didn’t lay down his life though thousands of innocent people did.]

So it was a bargain in which Muahammad Ali gets to keep his Caliph while Gandhi is rewarded with the cow. Even after all this compromise and appeasement, the conduct of the Khilafat leaders leading to the Mopla Rebellion showed that the country had gained nothing in return. The nation, the people of Malabar in particular were made to pay a terrible price. It was only in 1929 that Swaraj as complete independence returned to the Congress agenda. What one finds disturbing in all this is Gandhi’s willingness to go the full distance in this sordid affair, even to the extent of defending the Muslim leaders’ invitation to the Amir of Afghanistan to invade India. He justified this also on the ground that their religion (Islam) teaches it! Is it any wonder that his successors failed to give a national vision?

All this highlights a vital point made to me by the distinguished scholar Dr. K. D. Prithipaul, formerly professor of philosophy at the University of Alberta, Canada: the Muslims of India have never behaved like a minority. Instead, they see themselves — or at least their leaders do — as a privileged lot whose views, beliefs and practices must take precedence in every aspect of national life. This allows them to set the rules of conduct not only for themselves as believers, but also for the non-believers. This invariably leads to conflicts when Muslims demand their own version of legal and political entities (like Shariat and Personal Law) to be part of the state apparatus. And this includes everything connected with the country — from politics to the arts, extending even to how history should be presented.

Acknowledgements: I am grateful to Sri Pattabhiraman Suryanarayanan who prepared this excerpt from my book Gandhi, Khilafa and the National Movement published by Sahitya Prakashan of Bangalore. Other sources include History of Freedom Movement (3 volumes) by R.C. Majumdar and Gandhi and Anarchy by Sir C. Sankaran Nair. My book (shown above, summarizes the main conclusions of the sources, some of which may be hard to find.)