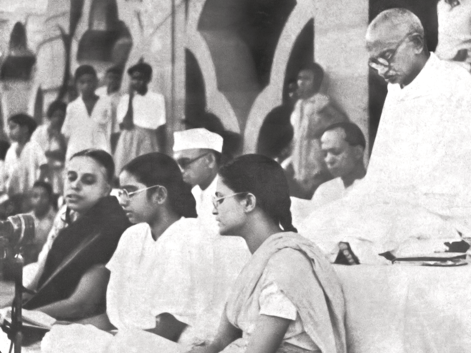 Mohandas Karamchand Gandhi, Mahatma to his admirers, died in January 1948 or more than sixty years ago. It is only natural that a spate of books should have appeared in recent years questioning his legacy and contributions, trying to separate the myth from the truth. For most of the last half century and more, the Gandhi myth has almost completely overshadowed the Gandhi of history. The fact that a large and influential constituency of Gandhi beneficiaries has prospered under the myth has made it doubly difficult extract history from the myth.

Two recent books that have taken on this onerous task are Great Soul by the American author Joseph Lelyveld and Eclipse of the Hindu Nation: Gandhi and His Freedom Struggle by Radha Rajan (New Age Publishers, Rs 495). Both note Gandhi’s peculiar habit (to say the least) of sleeping with teenage girls to ‘test’ his commitment to celibacy, but Rajan’s book is far more substantial and examines the impact of Gandhi’s actions on the future of the nation. It will come as a surprise to many to learn that Gandhi sidelined Sardar Patel and anointed the unfit and even cowardly Jawaharla Nehru as India’s first prime minister because Patel strongly objected to such ‘experiments’. Nehru proved unequal to the task; he lost his nerve and asked Mountbatten to continue as Governor General on whose advice he took Kashmir to the United Nations. The rest is history.

Incidentally, Gandhi’s proclivities for sharing his bed with young girls have long been known, but kept under the lid. Nirmal Kumar Bose, who worked closely with Gandhi during the months of 1946-47, noted this in a letter he wrote to another troubled associate. He even wrote a book My Life with Gandhi which was suppressed by the Congress Government. Bose wrote: “When I first learnt in detail about Gandhi’s prayog or experiment, I felt genuinely surprised. I was informed that he sometimes asked women to share his bed and even the cover which he used, and tried to ascertain if even the least trace of sensual feeling had been evoked in himself or his companion. … Personally, I would never tempt myself like that; nor would my respect for a woman’s personality permit me to treat her as an instrument of an experiment undertaken only for my own sake.” In other words, Gandhi used these innocent girls as guinea pigs.

Lelyveld mentions this as well claiming that Gandhi, while living in South Africa was homosexually drawn to the German-Jewish bodybuilder Herman Kallenbach. This is largely speculation and also has no bearing on history. But his dalliance with teenage girls was different. When Sardar Patel expressed shock and disapproval at such ‘experiments’ Gandhi reacted with fury, leveling charges against Patel himself, which Patel easily refuted. As Radha Rajan points out: “Reputed historians and other eminent academicians have not undertaken so far any honest study of Gandhi’s character. Just as little is known of his perverse experiments with women, as little is known of his vicious anger and lacerating speech that he routinely spewed at people who opposed him or rejected him. He treated those whom he considered inferior to him in status with contempt and in wounding language.” But Gandhi was careful not to offend his wealthy patrons and sometime critics like G.D. Birla, prompting some cynics to characterize him as a ‘cunning Gujarati baniya’.

This puts some tarnish on his Mahatma mantle, but as just observed, it also had serious consequences for the future of the nation. In sidelining Patel in favor of Nehru, Gandhi paved the way for the Kashmir problem, and as will be shown elsewhere, led also to the loss of Tibet to China and the attendant border problem. (Nehru also needs to be re-evaluated. He was not much unlike his great-grandson Rahul Gandhi, a child of privilege who achieved nothing on his own but bungled every responsibility.)

Gandhi seems to have had a congenital aversion to strong leaders like Patel. He disliked in particular Subhas Chandra Bose for advocating a more vigorous campaign against the British rule, and had him expelled from the party. Though it is not the official line pushed by Congress dominated governments for over fifty years, it was Subhas Bose and not Gandhi who brought freedom to India. The most distinguished historian to highlight Bose’s real contribution was the late R.C. Majumdar. In his monumental, three-volume History of the Freedom Movement in India (which the Congress-led by Maulana Azad tried to suppress), Majumdar provided the following extraordinary information:

“It seldom falls to the lot of a historian to have his views, differing radically from those generally accepted without demur, confirmed by such an unimpeachable authority. As far back as 1948 I wrote in an article that the contribution made by Netaji Subhas Chandra Bose towards the achievement of freedom in 1947 was no less, and perhaps, far more important than that of Mahatma Gandhi…”

The ‘unimpeachable authority’ that Majumdar happened to mention was Clement Attlee, the Prime Minister of Britain at the time of India’s Independence. As this is of fundamental importance, and Majumdar’s conclusion so greatly at variance with conventional history, it is worth placing it on record. (See Volume III, pp. 609-10). When P.B. Chakravarti was acting as Governor of West Bengal, Lord Attlee visited India and stayed as his guest for three days at the Raj Bhavan. Chakravarti asked Attlee about the real grounds for granting Independence to India. Specifically, his question was, when the Quit India movement lay in ruins years before 1947, what was the need for the British to leave in such a hurry. Attlee’s response is most illuminating and important for history. Here is the Governor’s account of what Attlee told him.

“In reply Attlee cited several reasons, the most important [of which] were the activities of Netaji Subhas Chandra Bose which weakened the very foundation of the attachment of the Indian land and naval forces to the British Government. Towards the end, I asked Lord Attlee about the extent to which the British decision to quit India was influenced by Gandhi’s activities. On hearing this question Attlee’s lips widened in a smile of disdain and he uttered, slowly, putting emphasis on each single letter-‘mi-ni-mal’.”

This makes perfect sense. Even today, while praising Gandhi and Nehru, many British historians become apoplectic if you mention Netaji’s name. Moreover, all the countries of the British Empire gained independence within a decade or so. There is no record in history of a great empire breaking up in less than two decades, other than the Soviet Empire which was not really an empire like the British. This is because Indian soldiers were the prop of the British Empire. It was the fall of Singapore to the Japanese in 1942, not the Quit India Movement the same year that defeated the British Empire. The French also had a large empire in East Asia then called Indo-China. They too became free after World War II. They had no Gandhi but had Ho Chi Min and General Giap who trounced the French in the decisive battle of Dien Bien Phu. Later they defeated the Americans also who were unwise enough to get into the mess created by the French.

After the War, the British Government wanted to try those who joined the INA as traitors, but the public saw them and their leader Subhas Bose as heroes. There were several uprisings beginning with the naval mutiny in Mumbai. Seeing the writing on the wall, the British agreed to freedom. More, they advanced the date of their withdrawal from the originally announced June 1948 to August 1947. Viceroy Archibald Wavell and his successor Mountbatten were both military men who saw the danger and wanted to get out in a hurry. The British were glad to have a weak Nehru as leader instead of a firebrand nationalist like Subhas Bose. But thanks to Gandhi’s patronage, it was Nehru and his family that benefited from Bose’s leadership and sacrifices. One of Nehru’s first acts was to almost eliminate Bose and his contributions from all records and history books. His photos were not permitted in government offices.

By contrast, Gandhi’s campaigns were all failures and may in fact have delayed India’s freedom by a decade or more. His Khilafat Non-Cooperation Movement led to the Moplah Rebellion and sowed the seeds of Partition. Partition in 1947 may have become unavoidable but the bloodshed could have been mitigated by following Dr Ambedkar’s suggestion of a complete and peaceful exchange of population. (This is what the Muslim League also wanted.) But the Congress during the 1946 election ran a campaign of ‘no partition’ and deceived the public. Gandhi in particular said the Partition could take place only over his dead body, but capitulated and agreed to Partition once Jinnah launched his ‘Direct Action’ that led to the Calcutta killings.

Gandhi’s other two movements— the Civil Disobedience of 1931 and the Quit India Movement of 1942 both fizzled out. The first led to the meaningless Gandhi-Irwin Pact and the latter led to nothing. But the image building went on. His famous visit to stop the Noakhali (East Bengal) atrocities has been exaggerated out of all proportion to reality. When he made his highly publicized trip to East Bengal, the worst of the violence had subsidized and he also enjoyed heavy security. The Government made sure that nothing untoward would happen to him, as too did Gandhi himself.

Perversion of the Bhagavadgita

His biographers like B.R. Nanda insist that Gandhi should be seen as a spiritual figure and not a politician and point to his writings on the Bhagavadgita. But these are read if at all only because Gandhi was an influential politician. Who reads ‘Gandhian’ Vinoba Bhave’s writings on the Gita though they make a lot more sense than Gandhi’s? Gandhi perverted the Gita by turning it into a manual of surrender to evil to serve his dogma of Ahimsa. He told Hindus not to fight or defend against Muslim atrocities but die in the cause of Ahimsa. During the Partition in 1947-48, wherever Hindus were getting massacred, he advised them to get killed willingly, rather than fight back or flee.

It is eye opening to see how often his writings and speeches contain expressions like: “I don’t care if many die.”  This was his Ahimsa!

As far as Gandhi was concerned the lives of individuals, especially Hindus were less important than his dogma of Ahimsa. They seemed to exist only to serve his Ahimsa, just as young girls existed to serve as guinea pigs in his ‘experiments’ in chastity. But it was different when Muslim lives were involved. Gandhi defended and even praised them for acting according to their religion during the Moplah Rebellion. He also insisted that they be given every protection during the Partition. In fact, it was Gandhi’s insistence that Hindu and Sikh refugees from Pakistan be driven out into the cold and rain from some abandoned buildings they had taken shelter in, in Delhi to make room for Muslims that resulted in his assassination. This was soon followed by his ‘fast unto death’ to release 55 crore rupees (a thousand crores or more in today’s values) to Pakistan at a time when that country was at war with India. This was the last straw and he was soon assassinated.

Considering Gandhi’s importance to modern India, it is entirely proper that his legacy be critically examined from all sides. Smt Radha Rajan, the author of Eclipse of the Hindu Nation should be complimented for taking a bold and important step towards that goal. The next question is: was it an eclipse of the Hindu Nation or of nationalism itself by creating a soft state incapable of tough decisions even when national security is at stake. Also to be asked is what made Indians follow such a person almost in toto even at the cost of their own and their nation’s security? We need many more studies asking these and other questions. This is no more than  a beginning.