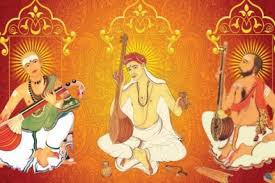 Swadeshi Indology in a Globalized World

While the West has incorporated Indian contributions, making them its own, it need not be a one way street. But our young people must be taught to learn about these  developments.

Several activists and scholars have expressed concern that Western Indologists and their followers in India (the sepoys in Rajiv Malhotra’s picturesque phrase) have taken away the spiritual dimension of much of Hindu art, as in music. No one would deny the spiritual core of Indian art, be it Meera Bai and her Bhajans, Jayadeva’s Gita Govinda or Tyagaraja’s compositions in Carnatic music. In their efforts to appeal to a cosmopolitan audience, some artists have attempted to secularize, even Christianize compositions of devotional musicians like Tyagaraja.

Carnatic singer T.M. Krishna (TMK) has been charged with diluting references to Rama in some Tyagaraja compositions, covertly suggesting  Jesus in his place. This is artistically perverse. No one takes Church music by a master like Johann Sebastian Bach and turns his masterpieces into works on Rama or Krishna. At the same time there is no harm in learning the use of techniques of counterpoint and fugues from a master like Bach or Handel and using them in Indian music. But this is hard work and beyond the scope of an average technician of limited capacity like TMK. The Beatles did learn from Ravi Shankar and incorporated it in their music.

Rajiv Malhotra further notes that Western art compositions like the opera have secularized what was originally religious in intent. This is debatable. The opera for the most part were created as secular entertainment. Bach wrote no operas. But great masters like Mozart and Handel wrote both operas and Church music but kept them separate. Handel’s Messiah is justly celebrated, as are Mozart’s Requiem and the Mass in C Minor. But their operas have no religious themes.

Even early composers like Claudio Monteverdi who too wrote religious works like the madrigals and the Marian vespers, and operas like Orfefeo en Euridice and Coronation of Poppea kept the two apart. Jacobo Peri’s Dafne is generally regarded as the first opera, and it is purely secular in intent and content. In fact Bach, the greatest church composer, was sometimes criticized for incorporating opera-like style in his religious works like St. Mathew’s Passion.

But all this is beside the point.  Malhotra is right in observing that temptations are great for subverting Indian achievements and assimilating and presenting them as their own contribution often with Indian collaborators. But this is one of the hazards of the age of globalization we are living in.

But this need not be a one-way street. And it has not been. The violin is now an indispensable part of Indian music, especially in Carnatic music. It was not always so. Balaswamy Dikshitar, the brother of the composer Muthuswamy Dikshitar heard it being used by British military bands and adapted it to Indian music. Carnatic music is inconceivable without the violin, a western instrument. Here is the background:

It was patronised by Manali Muthukrishna Mudaliar, interpreter to the British Governor, Pigot. Introduced by Mudaliar to Western music at a performance of the European orchestra (or band as it was called), attached to the East India Company, Balaswami trained for three years on the violin. A gifted musician, he contributed much towards adapting the instrument for use in Carnatic music. It resulted in his appointment as State Vidwan of Ettayapuram in 1824.

Varahappa Iyer, a minister in the Tanjore Maratha court and a musician himself, was close to the British Governor in Madras. He took an interest in various instruments in the Governor’s band. Curiously, his first choice was the piano with its seven octaves, but settled down to learn the violin, which he felt could be best adapted to Carnatic music traditions. You could not play gamaka (legato) on a piano. (Also the tempered scale introduced by Bach for keyboard instruments is not suited for Indian music.)

In time, he started playing so well that the Governor presented him with a violin. He too, like Balaswami Dikshitar, adapted the violin for accompaniment to the human voice. There is a road named after him in Tanjore in his honour. Krishnaswamy Bhagavathar also learned the instrument around the same time and attained a degree of proficiency.

But Mr. Malhotra has a point. For our young people to know about our contributions, they need to be made aware of them. In the U.S. there are courses like Music Appreciation that teach students about music to non-music majors. I myself benefited from such courses. I see no such courses in India. It is time such courses were designed and introduced. Indian schools and colleges are overloaded with politics and have little on arts and culture. They are taught more about Marx and Lenin than Tyagaraja or Purandaradasa. We are producing cultural philistines.

The famous Indian Marxist historian, Romila Thapar once wrote that the great Vijayanagar Empire was imitative and created nothing original. This is absurd but she got away with it because of the cultural ignorance of her readers. She knows neither Kannada nor Telugu (nor Sanskrit) and no music, but still did not hesitate to make such absurd statements.