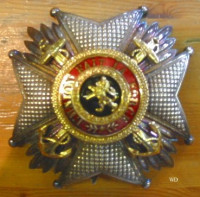 Before the Lok Sabha elections of 2014, I had written an article questioning Sonia Gandhi’s disparagingly remarks regarding Narendra Modi.  After all, having received an award (“The Order of Leopold”) carrying the name of one of the worst killers in history, Sonia and her party had no right to call Narendra Modi or anyone else names such as maut ka saudagar (or merchant of death). One who lives in a glass house shouldn’t throw stones at others.

Five years later, much has been made of Sadhvi Pragya Thakur for calling Gandhi’s assassin, Nathuran Godse, a patriot. But what about Sonia getting the award instituted by someone who made a business of mass murder?  The question to ask: is Sonia Gandhi a patriot, and of which country?

Her propensity to favour Italian operators, helping them make money on contracts with the Indian Government, is no secret. How about her late husband who favoured Italians in government deals. Also let us not forget that all of them escaped to Italy during the 1971 war, for fear that Rajiv, then a commercial pilot might be called up for duty, though non-combat.

It is also known that in 1977, when Indira Gandhi was defeated, Sonia Gandhi ran and hid in the Italian embassy, and was brought back by Sanjay and Maneka Gandhi who assured her of her safety. Still Congressmen consider it in poor taste and worse to question her commitment to India.

Earlier this month, actor turned politician Kamal Hasan also brought up the issue of Godse as a Hindu terrorist. But his act was a political assassination, and to call him a terrorist trivializes terrorism. Unlike the Mumbai terror attacks of 2008 which killed hundreds, and the Khilafat that killed thousands and ruined Malabar in 1921, no group of innocents was in danger because of Godse.

Terrorism is the challenge of our time. Let us not trivialize it by calling every crime a terror attack. Terrorism is not some ordinary crime but warfare by other means. Pragya Thakur may have called Godse a patriot but that is not the issue. Godse was no terrorist, nor was he like a King Leopold, one of the greatest mass murderers in history.