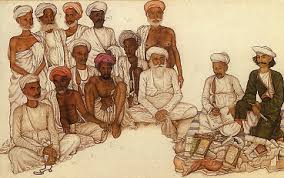 What saved India’s Peasants during the Medieval Period?

On India’s peasants, artisans and working classes, little of the true picture is provided by India’s Nehruvian-Marxist historians about how they survived under the various Islamic foreign arrivals into India in the last millennia.  The “egalitarianism” myth is what most of the public has been told, yet rebuttals to it, from Islamic chronicles along with western visitors reports, paints a horrific picture.  Until the 14th century, there is little mention of poverty or the poor decrepit conditions of Indians.  By the 16th and 17th century, however, a striking contrast emerges.

Artificially low prices of commodities destroys peasant livelihood. Large invading armies needed commodities at cheap prices.  With army salaries typically being low other than war booty, this also meant that it was the native peasants and tillers who had to subsidize the entrenched invaders.  This agrarian policy was first pioneered by Alauddin Khilji in the late 14th century.  This pattern continued with Sher Shah Suri, and was later imitated by Akbar and the Mughals. By the time of Shah Jahan’s rule, as one European visitor wrote, langoti was the only dress and kichri the only food for the peasants. He was likely referring to Northern and North-western India (now Pakistan) where Mughals held sway. Low pay (or even no pay with a complimentary whipping in lieu of payment) for services rendered for other labour meant poor quality products and a culture of theft and banditry became endemic. Artisans as a rule were badly off, with even the less wealthy European visitors shocked at the low rates for jobs and labour.  A vast servant culture would develop.

If the Hindu upper castes were really oppressive, the lower castes would surely have converted.  Instead, they fought back or ran to new places to settle.  Much of todays SCs and OBCs are former Kshatriyas, Vaishyas and Brahmins.  Certain lower castes (Bhils, Lohars) would go further, vowing to only eat food on leaves (rather than metal plates) till their motherland was freed.  The peasants were never subjects of the Islamic rulers, but rivals. If people of today’s India understood this in its entirety, there might even be a mass public movement to rebuild tribal society, rather than letting missionary propaganda hold sway.

“…the Turks, whenever they please, can sieze, buy or sell any Hindu..”

Revenue collection and mass slavery. From the time of Mohammed Qasim in the early 8th century itself, a tradition of gifting the captured daughters of chieftains and rajahs to the invaders as well as their foreign religious heads had become normal. The result over the coming centuries included “exploding harems”, and a new dress code for women. Ghazni’s Indian (a reference to current day Pakistan, or as writers like Shashi Tharoor fail to mention, the steadily Islamicized North-west India), as well as west and central Indian forays resulted in the wide distribution of Indians into slave markets as far as Khorasan, Bukhara, Damascus and even Cairo ! Bukhara at one point had 75% of its population consisting of captured Indian slaves, to be traded for horses, dogs, cattle and armour. Run-away slaves and escapees would also move en masse into Europe (as today’s Romanis, formerly known as gypsies), something that went into over-drive during the arrival of Mohammed of Ghauri in the late 12th century.

The peasantry would often have to sell their children to make up for any tax shortfall. High family girls were prized gifts, especially because of the common practice of learning dance as part of their education. This is an example for the keen reader of history to pick out the subtle omissions of William Dalrymple and his “syncretism”. In his White Mughal story, he mentions the visiting English protagonist being offered a dancing girl, but does not reveal her likely origins.  The slave raids would never cease, with Ahmed Shah Abdali (1760s) in the north, and Tipu Sultan (1780s) in the south, giving way to outright abduction during the Moplah massacre (1921), the exit of Bengali men without their womenfolk into Tripura (1947), and the Hindu exodus from Kashmir (1990). This trade has its most unfortunate modern version, with “brokers” who continue to service elderly Saudis visiting Hyderabad even today.  It should come as less of a surprise to note that Chittor had become known for brave Rajputnis committing Jauhar with their children, from the time of Alauddin Khalji to Akbar.

Repeated jubilation at the suffering of the Hindu peasantry. Many of the invaders displayed a cynical pleasure at exploiting the poor. With Mughal revenue collection on an ever ascending scale, tax collection required soldiers to enter villages, where stiff resistance was common from armed villagers, as even wives provided armed back-up.  As Lal mentions, India’s new bonded labour “tradition” could possibly find its origins, if not the confirmation of existence, by the reign of Shah Jahan. Where the Muslim despots ruled, ruin followed.  With hopelessness destroying the spirt, and to avoid toiling for tyrants, many would flee their villages en masse, often to be hunted.

So What Save The Hindu Peasantry And Artisans?

“The Muslims dominate the infidels, but the latter fortify themselves in mountains rugged places, as well as in bamboo groves. Hence they cannot be subdued.”  Ibn Battuta

Rains, jungles, mountains save the Hindus.  In a way Central and West Asia could not survive, as the landscape offered fewer hiding places, the natural varied terrain of India would become a refuge for those in a position to flee. The soil was excellent, and crops could be grown in all seasons even if rains were occasionally lower, thus enabling survival in new settlements that would appear overnight.  In the jungles, they would restart their lives, and often re-group into a resistance, often led by Hindu zamindars. Some of India’s business communities would be wise to realize that becoming British loyalist would come later, yet in those days, their duties towards the other occupations remained high, a tradition some have maintained.   Meanwhile, the lower caste peasants provided troops to, and would become part of the warrior clans they joined, displaying occupational and caste fluidity.  Indians must know these stories and the significance of the natural geography that has allowed them to survive.

2 Replies to “What saved India’s Peasants during the Medieval Period?”