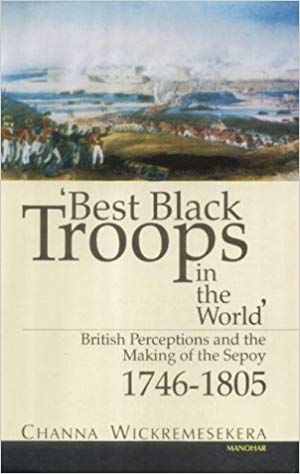 One of the more common questions when reviewing India’s history is about how the British were able to take over at all. This question is multi-layered with one key pillar being the inter-play of the natives battling the previous well-entrenched Islamic invaders, while a “trading” company carefully bided its time over two centuries in a long transition. It is not a straight-line answer but full of its little twists.

Channa Wickremesekara’s “Best Black Troops in the World” lists some of the  circumstances during the initial transition period, from 1746-1805, a few decades after the end of the last strong Mughal ruler, Aurangzeb. His fall should have slowly allowed the natives to re-assert themselves fully, except for multiple factors, a few of which are listed here.

The expanding foreign presence. For several centuries already, the Islamist mercenaries and even slaves from what would be over 20 West Asian, Arab and African countries today were at play, bringing a series of apocalyptic occurrences in different parts of India. The fact that India survived that at all is a testament to the indomitable will of its natives. Added to this came European traders from the early 16th century, along with a rag-tag of mercenaries who would eventually participate actively in this party of loot and destruction. These included Portuguese, French, Dutch, British, as well as the famed mercenaries of Hesse-Kessel in Germany, who at different times would serve their European, as well as the Islamic, and occasionally the indigenous Hindu kingdoms.

The foreigners, with their weak local affiliations, were easier for the various East India companies to rely on initially. As they watched the natives continue to battle the prior invaders, a slow and steady expansion of European interests and holdings was enabled. Initially finding it hard to recruit locals to guard their factories, the Europeans would employ Topasses (Luso-Indians), African slaves and even Jews settled along the western coast. The domestic turbulence and the waning of the maritime hold coincided with the British rise and control of the key sea lanes, making defections to the British side by the foreign mercenaries a common occurrence. With the French EIC and British EIC allying with various powers, some like the Nawab of Carnatic (himself an alien) who asked for British help ended up ceding lands to the British to pay for services rendered. The Bengal, Madras, Surat and Bombay trading posts slowly morphed into wider presidencies.

Professionalization of the army. What used to be soldiers aligned by clan loyalty to kingdoms slowly gave way to the eventual corporatization of the military, with bravery redefined as loyalty to the company. This new military administrative structure, with an efficient bureaucracy to back it up, medical staff, pensions, and so forth were further inducements. Preference was given to Europeans in leadership posts and they were less likely to hesitate when attacking native rulers’ armies. Many European deserters also found work in India; the Mughals had deserters running artillery functions who were Portuguese, English, Dutch, German, French and so forth. Hyder Ali and Tipu Sultans ravaging destruction of the South would have not been possible without the French, who also worked for the Marathas, some of whom in turn offered their services to the East India companies. These foreign mercenaries lack of connection to this alien land India was useful, while defections were common, such as Arab soldiers of fortune defecting from the French to the British EIC for better pay and benefits.

Defending rulers struggled. Native armies suffered from a chronic delay in pay, whereas this was rarely the case with the EIC as they continually expanded their holdings at the expense of the defenders, as well as other prior alien rulers who hired their protection services. Slowly, the domestic Indian military labour market too ended up providing its share of hires to the foreigners. The projected timidity of the native soldier and other negatives were later prejudicial writings, when their renowned personal valour became secondary in the face of the modernization of battle tactics, and an evolved professional military administration.

As the prior invaders hold on India slowly shrivelled in territorial holdings, the rise of another set of alien European powers was enabled over time on Indian lands in that early transition phase in the 18th century. The contemptuous outlook towards the Indian natives, accompanied by various emerging race theories being pushed by the church and by European intellectuals, were still in development, and would become part of the dominant discourse and eventual tyranny by the British Empire as the 19th century progressed.

Wickremesekara’s work provides an entertaining introduction into this early period of the 18th century, which rather than a prelude to a ray of hope, became a continuum of the dark period that had been visiting the natives of India for centuries.