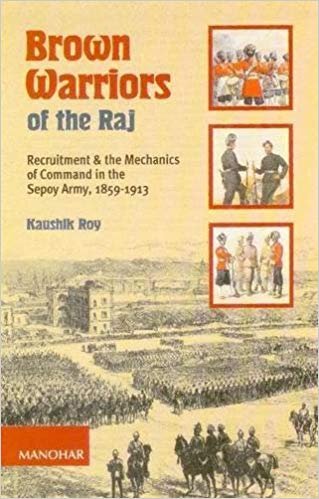 Brown Warriors of the Raj

Aurangzeb’s close to 50 year reign ended in 1707, and by the 1750s, various events transpired that would make it clear that the Mughals were no longer the dominant force in Northern India.  A long and uncertain period was to follow.  Some aspects of the earlier phase that relate to the East India Company’s army in the 18th century is covered here.

Now we go further into the 19th century, and explore another source, Kaushik Roy’s “Brown Warriors of the Raj”, to understand how the British East India Company was able to strengthen its hold on this India in transition. It is during this period that some of the more lasting stereotypes were pushed, and remain entrenched in the false mainstream discourse that persists due to our Marxist history oriented education system and its proponents in the media.

The careful nurturing of race theories. It would be an understatement to say that the church and its various European conquistadors were fond of pushing race “constructs”, when practically no region on the planet was spared in the last millennium.  This tradition of fabricating entire race theories and conducting control-oriented “ethnological studies” to suit the imperial agenda would give rise to the Martial Race theory and its civilian twin in the Indian context, the debunked (yet still in use) Aryan Invasion Theory.  With Scottish highlanders, to various Nigerian and East African communities classified as ‘martial’, other once proud communities were to be belittled, and economically and spiritually torn apart. Now it would merely be India’s turn, with the newly identified martial communities often being middle ranking communities, carefully balanced by clan and region, and ideally less literate than other groups.

Strangely, even these “chosen” people were not to escape condescending descriptions from their British masters: “drunk rogues”, “notoriously stupid”, “(having) irresponsible manners”, “treacherous and fanatical”, “loyal but useless soldiers”, and so forth.  Without naming them, the reference here is to communities that have more than confirmed their mettle in science, industry, and bravery in today’s India.  Less educated agricultural peasants engaged in hard labour were considered not only more malleable, but also more likely to show valour and loyalty compared to the more literate.

Stifling patriotic sentiment.  Any kind of broader Hindu-centric grouping was discouraged, and ideally, multi-polar balancing was always in effect to ensure that the soldiers would feel less affinity for their own compatriots, and more so for the company.  The British were to go to the extent of even dividing so called lower groups into lower and lowest to ensure tensions, while forging entire new identities for others.  Despite these efforts, in the presence of the British whose sense of superiority was always evident, Indic mutual sympathies would never disappear.

Using Muslim troops, both foreign as well as their local converts, complicated matters further.  At times, their own unity or Pan-Islamism was exposed as a myth within the Indian context.  Tensions were encouraged, with regiments having separate companies along religious and regional lines. The long hostility between Punjabis and Pattans would continue to be stoked. The Muslim component of the various EIC regional armies would often be disproportionately higher (between 35-60%) vis-à-vis the general population.

The North-West and Punjabization.  With the Russian advance and (eventual) take-over of the Central Asian Turkestan region by the middle of the 19th century, it became a critical strategic decision for the British Empire to over-focus on recruitment (and thus economic reward) in and around the North-West frontier, at the expense of other regions. The manpower from a treatied Nepal and India’s other hill regions (the famed Kodavas of Coorg being one example) would also become more prominent.  As the author points out, if the eastern frontier was the principal strategic area to defend, then history would have witnessed the Bengalization of the EIC army instead.

The earlier Anglo-Mysore wars had already caused a devastation of the available recruits from the south. The purging of the rebellious Purbiyas of 1857 (eventually replaced by the Sikhs and Muslims of Punjab) would result in a drift away from the more respected and feared “big bad wolf”, the Bengal army of the EIC.  The British themselves were to have heated debates, with different groups favouring different regions, but ultimately it was the hilly NW terrain and the Russian advance that became key factors.  The long term economic fall-out to other regions would be felt for generations, along with character stereotypes that have unfortunately persisted.

Other complications.  There were multiple other factors that the British had to manage and carefully nurture on their path to becoming the paramount power in India.  Several communities were considered too traditional to be considered loyal recruits.  On the flip side, communities that did join the EIC couldn’t be outright classified as treacherous either.  Many were biding their time and considered it more practical to be armed and not left behind economically,  in a highly fluid situation where British paramountcy might not last. Certain merchant groups were to be given permissions to operate over others, with some remaining legacy colonial friendly merchants even today. The British were also to display odd biases, such as preferring recruits from colder wheat consuming regions rather than those from warmer rice-growing regions, with this being a parallel for their preference of the “lighter” and “fairer”. Some of modern India’s new religious converts might find it odd to learn that their appearance was considered too “beastly” for recruitment by the EIC.   As for the largest political organization in India at the time, the Congress is described as “not interested in spreading sedition among the troops”!

Not all of the British could be considered racist in attitude or action, even as race became a dominant classification for control among their compatriots. Many such officers were clear that it wasn’t race or region that stood out, but the imparted training and acclimatization of the recruit, yet it was their more race-oriented compatriots’ ideas prevailed. The arrival of British women into India accentuated racial divisions towards Indian women, something that might interest today’s copycat feminists.

The British upper class and aristocracy were also uncharitable in their descriptions about their compatriots in India, who they described as “scum of the earth”, often criminals and drunkards who were tricked or forcibly sent to the India theatre. These in turn were to treat their Indian soldiers with great contempt.  With the creation of barracks and cantonments, the “othering” of domestic soldiers would enhance their distance from their compatriots, towards a greater loyalty to the crown.

As can be seen, there were too many factors at play, some opportunistic, some deliberate and nurtured, and some outright evil that were to slowly enable a new alien to eventually tyrannize the people of India, steal its knowledge and loot its wealth, and emasculate its spirit.  These destructive forces have permanently changed the face of the earth, as no region has survived the multi-century onslaught of alien soldiers coming forth from innumerable countries in the name of violent religious-material ideologies.  The natives of India can take solace that its culture and traditions, even if some of it has been eviscerated or lost, have not been totally destroyed and replaced.  In fact, if one were to be objective, Indians should take pride.  We are among the last standing that retains a civilizational continuum going back several millennia.  Once we overcome our ignorance and replace it with the knowledge of the teachings, deep spirit and resilience of our forefathers, then a sense of real (not false) pride, and a duty to our ancestors and our land will return.  Some are already on this journey.