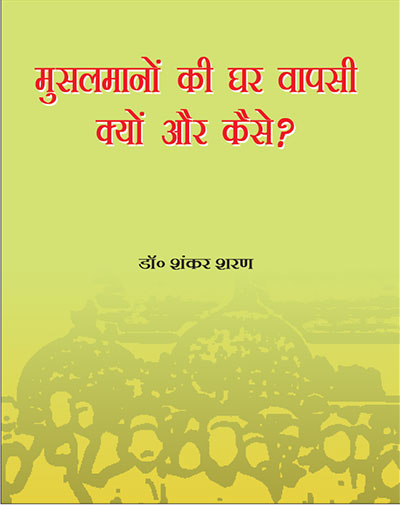 Muslims’ Gharwapasi: how probable is it?

Muslims seeing through the pretensions of Islam and returning to their traditional faith is the only peaceful and lasting solution to the Islam problem that has blighted India and many other lands for centuries, says Dr. Shankar Sharan in his latest book, “Musalmano ki gharwapasi kyon aur kaise?” More importantly, for Muslims themselves it would be an act of liberation from the shackles a rigid and oppressive belief system that seeks to control every aspect of their life on pain of severe penalties, death included.

Dr. Sharan invites Indian Muslims to remember their Hindu ancestry and own up their rich and variegated civilizational heritage by returning to their traditional faith.

In the present circumstances, the call is most likely to be received with cold indifference, if not open hostility. Political Islam, which promises dominance, riches and pleasures in this world and heaven with celestial damsels in the afterworld, is a powerful motivation for minds of certain types. The civilized world has begun to experience its push.

Most Muslims have internalized the hostile and contemptuous Islamic view of other religions and societies. The recent demographic trends encourage Muslims to believe that in a few decades they will be able to outnumber the Hindus in India and solve the communal problem in their own way. Also, the partisan democracy empowers Muslims to punch far above their weight, even as it imposes obligations and restrictions on the Hindus. Politically, homecoming is not an attractive option for Muslims.

For all that, however, homecoming of Muslims is not as preposterous and far-fetched as it may seem to the average Hindu who has only watched one-way conversions helplessly. The process of Muslims coming back to the Hindu fold has been going on for centuries, says Dr. Sharan, giving several examples from different times and places. The numbers were comparatively small, no doubt, and the process progressed haltingly; but its very existence and continuity holds out a hope.

The book’s message cannot be described as hate-speech, although Muslim clerics and Hindu secularists would jump at the word. The author does not blame Muslims, not even terrorists. His thesis can be simply stated: the aggressive, intolerant and violent attitude of Muslims to their neighbours, the extreme self-righteousness that quickly surfaces even in moderate Muslims and the unrepentant cruelties perpetrated by Jihadis on their hapless victims are all rooted in the basic tenets of Islam. They have picked it up from primary sources such as Quran, Sunna and Hadis. The behaviour pattern patented by followers of Islam flows directly from the life and teachings of the Prophet, whom they are taught to emulate in every aspect, right from the childhood.

That being the case, there is no name calling in the book, there is no call to arms, no blood chilling exhortations for a “final” solution. The author relies on the power of truth to survive all suppression, on the eternal and universal longing of the human soul to seek truth and live in harmony with the world, both within and without. Like Communism, Islam will implode from within, rather than be destroyed from outside. It is a mathematical certainty, he says. Why is he so confident? For that, first have a look at the basic structure of Islam.

Like its Abrahamic siblings, Islam is founded on a central figure, Allah, who commands the exclusive and overriding allegiance of the believers. Allah is jealous and brooks no rival. To equate or identify Him with gods worshipped by people of other faiths (e.g. Rama, Buddha or God of the Bible) is to insult him by denying his supremacy. Allah is the only true god. All other godheads are usurpers, pretenders and impostors, and their worship, being a denial of the only true God, deserves to be stopped.

This only true god is not accessible to ordinary human beings. He deals with his people through an intermediary, messenger or prophet. His teachings are contained in the Book. The Book is sole repository of Ultimate Truth. Since the Book is authored by God himself, every word in it is true, excellent, immutable and binding for eternity. The Book, al-kitab, is beyond the comprehension of most of even the believers, and certainly the non–believers. We must, therefore, heed the Maulavi, the alim, the Imam for proper guidance.

The faith in the Book is the overriding duty, as is the duty of making others to see the light. Since this is the absolute Truth, since it alone can lead to Heaven, mankind must be awakened to it for its own good at any cost in whatever way. This is both the duty and the privilege of the faithful. No sacrifice is too great for holding on to it; no means are impermissible for converting others to it.

The exclusive claims about the only true god, the Prophet are to be accepted on faith, on authority. A believer is not permitted to ask for proof or confirmation of the claims or contents of the book. Asking for proof which cannot be supplied is to show one’s lack of faith, a great disqualification. Since the entire edifice rests on unquestioning obedience to the dogma or the belief system, Islam despises doubt, suspects reason and views science as a rival if not enemy. For the believers, testimony of the book is stronger than the proof of logic or their own experience.

The very idea of an absolute monopoly of ultimate truth contains within itself seeds of intolerance, aggression, strife and authoritarianism. It is a charter for killing, destruction and subversion with a clean conscience. Within the creed, there will always be multiple claimants to this monopoly of truth. Outside, there are bound to be others who refuse to acknowledge the authority of the book. This puts the believers in a state of perpetual conflict among themselves and with their neighbours.

Voices of doubt have always existed. In Mohammad’s own day, many people rejected his claims to prophethood and doubted his revelations. For a few centuries after his death, there were widespread uprisings to throw off Islam.

The modern age of reason, science, high degree of connectivity, constant interaction across the globe and interdependence poses existential risks to a belief system such as Islam. For one, spread of education has thrown up rationalist critics and reformers from among the ranks. Names of Dr. Wafa Sultan, Anwar Sheikh, Ali Sina, Sarah Haider, Ayaan Hirsi Ali, Tasleema Nasreen readily come to mind. They were all born in Muslim families and brought up in Muslim surroundings, have studied Islam from primary sources and have come to challenge its basic beliefs and pretensions of supreme truth. They evaluate the life and teachings of the Prophet on the scale of rationalism, universalism and humanism and find them wanting. They are not satisfied with the life that Quran prescribes in this world and not impressed with the reward promised hereafter.

As Muslims come into contact with the outside world and its people, they realize that it is very different from what they were told about it. So far they had been viewing others from Islamic point of view. Now they are learning to view Islam from other standards—reason, science, humanism, modernity, democracy.

It is no longer possible for traditional guardians of Islam either to suppress or silence these voices nor keep their flock away from it. Thousands of Muslims even in countries such as Saudi Arabia, Pakistan and Iran are beginning to see Islam for what it is and leaving it in droves. While they cannot come out in open as apostate for fear of reprisals, they share their views and experience on internet and social media quite extensively.

It does not help the cause of Islam that its guardians are unable to come up with rational and convincing answers to the criticism. Frankly, this is not their fault. Fear is the only weapon they have. However, what worked in seventh century Arabia may not work now. Threats of violence or actual violence can drive the critics and doubters underground, but will not convince them. Any defence of Islam rests on acceptance of its basic tenets by the other side; so any debate with a doubter is a non-starter.

This is the context of Dr. Sharan’s call for homecoming by Muslims. He has a word of sound advice for non-Muslims: learn to distinguish between Muslims and Islam; and lay the blame where it properly belongs. We must see Islam as it is, rather than as we want it to be. As human beings Muslims are no different from others; they behave in a peculiar way because of Islam. It is naïve for western political leaders to say that “we are fighting terrorism, we are not against Islam.” For, Islam is the source of terrorism. Non-Muslims should avoid the temptation of claiming to know Islam better than Muslims including terrorists. The latter know their tradition better.

Dr. Sharan does well to distinguish between Islam as a way of worship and political Islam. Hindus can easily live with the former. Millions of Muslims live peacefully with others by keeping religion a strictly private affair.

It is the political Islam that poses a grave threat to the civilization as we know it. It speaks the language of theology, but its objectives are political. It seeks to decimate other cultures and religions, conquer other lands and subjugate other people through conversion. Islam not just permits but actually enjoins its followers to pursue this agenda relentlessly. This should be resisted firmly even as enlightenment about true nature of Islam spreads among Muslims.

Non-Muslims should help that enlightenment by following the path of truth and non-violence. Truth about Islam must be told, but in a non-offensive manner. Outgrowing a belief system is a painful process; the person undergoing it should be assisted, rather than pushed.

Orthodox Islam still has a lot of force at its command. But people have a habit of asking inconvenient questions of their rulers, and patience to wait for answers. Systems and regimes that are strong externally but empty within cannot survive the onslaught of inquiry. It happened to Christianity, it happened to Communism. It has begun to happen to Islam.