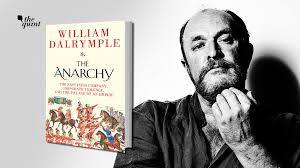 The Anarchy: The Relentless Rise of the East India Company, William Dalrymple, Bloomsbury, 2019

A few years ago, this writer was travelling through Zimbabwe and happened to meet a European in his mid-twenties, who had just come in from Angola. Soon the topic veered into how his country Portugal had ruled over parts of the world, and the young man’s face turned into one of awe and disbelief about his country’s achievements.  If you are wondering how the conversation went, we did not discuss Western imperialism, or the Portuguese Inquisition of Goa, arguably the worst in history.  The interaction remained pleasant and we parted ways amicably.  As some travellers from the colonized world might know, this is quite a common occurrence, an innocent gloating met usually with a polite nodding and a steering away into more innocuous topics. It is wrong to hold common people for the crimes of their ancestors for various reasons, as most are under-educated about the truths and horrors of the past, and don’t mean any harm.  But when it comes to historians, it becomes a different matter.

The track record of British imperial historiography on India has from its beginnings been quite dubious. Dalrymple’s The Anarchy, which largely focuses on the British East India Company’s (EIC) machinations during the crucial second half of the 18th century, provides very useful and interesting details on the Company’s slow and steady rise as the paramount power that would eventually displace the long disintegrating Mughals as well as other Islamic and native Hindu rulers in India by 1803.  Beautifully bound with lovely images, a reader will expect to get a window into that critical period.  But will a discerning historian or researcher find much of merit in the book? To this reviewer, this book fails quite badly on that front.

Early on, Darlymple makes a fascinating statement: “It is always a mistake to read history backwards.” Many read history backwards, till they find a suitable starting point, and then read it again, forwards, and this is one of the first issues with the book.  Dalrymple’s starting point is the year 1599 when the East India Company is formed. This might seem logical when it comes to the conquest of India, except it completely misses out on the context of the church and Western European imperialism, including its British variety.  By the time the British were able to get started with a Surat factory in 1618, courtesy the Mughal Emperor Jehangir who ruled northern India, their crimes were either well under way or happening in parallel in multiple distant theatres across the world.  This included what became the United States and Canada, as well as the Caribbean, various parts of Africa, and Australia.

By 1803, these other regions would forever be changed, through slavery, genocide and mass annihilation.  The assertion that the EIC was “just a company” when placed in the context of the innumerable abominable crimes against humanity against natives wherever the British went makes 1599 the wrong starting point.  It does nothing to tell the innocent average Briton interested in a fair reading of history about the role of their own leaders and historians. Nor does it inform them about the origins of such immorality, which Dalrymple does not explore.

By the time the economically and technologically backward British arrive in awe of the splendour of the Mughal court of Jehangir, it is to be assumed that this is India. It is, yet it isn’t. Darlymple, although he does mention it in passing, doesn’t decide a starting point on the long drawn out war between the natives of India and their foreign Islamic invaders.  To keep his book short, he could have started with the great Shivaji’s battles against Aurangzeb a full century earlier, leave alone the initial attempted set-up of the Mughal Empire in Northern India in 1526, or any other useful starting point such as 1206, 1192, 1003 or earlier, and the resilient native response over centuries. Crucially, given that the EIC’s first conquest is Bengal, Dalrymple fails to provide a background on how Bengal came into Islamic control.  We are just to assume the Mughals are legitimate and “Indian”, even though he helpfully points out the obvious foreign (i.e., non-Indian, non-Hindu) lineages of the various nawabs and other key protagonists.  Dalrymple’s bibliography includes a K.S. Lal book, “The Mughal Harem”, but far more relevant would have been “The Legacy of Muslim Rule in India”. This failure to discuss the multi-century Islamic tyranny, and Hindu resistance, makes for shallow reading and poor contextualization of India.

Throughout his book, there is some version of “it was just a humble company” that needed to be “regulated”.  Is this primarily because of, according to Dalrymple, the apparently amazing European “innovation” called the “joint stock company”?  Multiple companies including a few Dalrymple mentions (e.g. The Sierra Leone Company, trading in slaves) left British and European shores in the medieval period, along with many that weren’t “companies”, to eventually commit  horrific crimes against native cultures.  What kind of an outfit attracts mercenaries for hire from far-off Christian European lands?  The word “company” was just a mask for something vastly more diabolical.

Furthermore, the company was regulated, initially not sufficiently to the liking of its stockholders, who wanted the spoils to themselves rather than seeing its “servants” return as social climbing “nabobs” who engaged in dangerous wars that might threaten its profitability, which over-rode any moral imperative in foreign lands. So his claim that it needed to be regulated or just regulated better, and this is “never been truer today” falls flat.   At no point, despite insincere semantics, is it about treating natives and their culture with respect. From its beginnings, the EIC was given the right to wage war and raise armies, with the backing of Parliament and the Crown, and even more so with the Acts of 1773 and 1774, which Dalrymple mentions.  Regulations that respected native sovereignty and culture would be another matter, but these come across as afterthoughts, if at all.

Chapter 8 is “The Impeachment of Warren Hastings”, running 28 pages, of which only 7 are devoted to the actual impeachment.  This was an insufficient analyses of the critical window into the workings of the British Parliament and Crown at that time. Dalrymple seems to have a preference for Hastings, and says “Parliament impeached the wrong man” implying Robert Clive should have been impeached.  What is missing here is the idea: how would the Crown, its Parliament, and its bankers impeach themselves?  As for Aurangzeb, Dalrymple tries to pull another version of being an Audrey Truschke. The reader might assume native Indian writers have never acknowledged that the Emperor had immensely admirable largely discipline oriented qualities, but in the end, his jihadi zeal would trump all of this.

Dalrymple tries his best to do a “balanced assessment” of Tipu, and fails miserably, instead coming across like he is auditioning to be chief guest at the next (rightfully cancelled) Tipu Jayanthi.  There is no mention of Tipu’s own testimony, and the even more glaring omission of Tipu’s treatment of the Kodavas and Mandya Iyengars, instead offering the highly disputed, if not debunked, Marxist-liberal apologetics about the Tipu who woos Hindus and patronises temples, and is thus unfairly judged.

The ambivalent reader is encouraged to take the challenge: read chapter 8 or 9 (“The Corpse of India”) at any bookstore, and decide for yourself if this review is “biased”.  If the reader can’t see through the sophistry, then it is likely due to unfamiliarity with the rebuttals to India’s liberal-Marxist history distortions.

Overall, this book tells you that having an impressive Oxbridge set up, a supporting publishing industry where Dalrymple wields immense influence, and the right marketing juggernaut, triumphs a fair reading of history.  This book isn’t a total failure, and does offer a partly impressive bibliography, as well as plenty of interesting details about battles lost and won. Nevertheless, it will remain yet another production that is in line with the traditional British imperial historiography of India going back to J.R. Seeley, Macaulay and several others. This is the 21st century: history readers have more than enough sources to cross-verify and I suspect they will over time agree with this review, regardless of how many “book of the year” awards it will get.  It is 2 stars out of 5, at best.  This book reveals a lot more about imperial historiography and the author that one might expect, and might be the turning point for some Dalrymple fans who will start to see through his writing.

(Editor: This is part 1 of a two-part review, first published on Swarajyamag.  Read Part 2, also published on this site).

How Indian was the Mughal Empire?, Aneesh Gokhale, July 2018, IndiaFacts.org

The Story of Islamic Imperialism in India, Sita Ram Goel, 1982, Voice of India