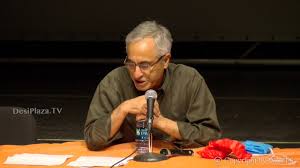 The YourAwesomeIndia.com (YAI) Editor recently had the opportunity to send questions to Subhash Kak.

Firstly, I am very grateful and excited to be able to do an email interview with you.  I’ve seen very accomplished people who are in awe of you, so for someone of much more modest capabilities, this is an honour.  Your sheer breadth of writing is mind-blowing, and I have spent countless hours trying to pick up what seems like just the tip of the iceberg, in terms of the knowledge you are sharing.

You take very complex subjects and make them (somewhat) simpler and fun to follow.  I’m reminded of a family elder who is a retired nuclear physicist.  He said one of the big challenges that gurus and scientists face is to take very complex messages and fine tune it for the different temperaments and capacities of the receiving listener.  You seem to do this exceptionally well.

So do permit me to ask questions from a wide range of your work, rather than a narrow topic.

Q1: Firstly, I noticed something interesting in your video interviews: why do you begin and end with namaskaar and dhanyawaad ?  If this is your signature, I love it!

SK: I had not paid attention to this, so it must have been spontaneous. Now that you mention it, I should make this my signature.

SK: This is a reminder how much we change with time.

Q3: You mentioned that your serious dive into the Vedas only happened once you were a little older, and in the US already? This seems to be a common pattern for many.  What recommendations do you have for those who are interested, but don’t quite know where to start, in terms of studying our heritage, especially for people busy with jobs, family and life? Are these different paths and recommendations for different temperaments?  How does a novice start (any foundation authors or books for beginners)? How early should we start (seems to me, as early as possible)? And how does someone already on the journey start so they are not spending time in the wrong place?

SK: The Vedas deal with subtle understanding of the mind and reality. It does take time and a certain level of maturity to get deep into them. There are two issues with furthering one’s understanding. First, there are no easily available resources that help guide one’s study. Second, what is available is often misleading. To help the reader, I have this introductory essay.

Q4: You hate the word caste, per one your videos (with Sree Iyer min 10).  So do I! I always use communities! So if someone during your younger days would derogatively say: “but India had the caste system”, how did you usually respond? I’d tell them we had a fluid occupation system, but the Brits gave us the British caste system, and that caste is a Portuguese word! How did you respond to such innocent or even motivated condescending questions in your life (if you faced them)?

SK: It bothered me so much that many years ago I wrote an essay on “caste” for an anthropological journal.  I am perfectly happy if people use the terms community, as you do, or jati, which is the common Indian term for it. I do not claim that there was no inequity in ancient India, but rather that jatis have gone up and down in history as communities do in all nations. The jati system was put into a straitjacket by the British as they acknowledge.

What is sad is that India has let bad ideas dominate public discourse. It is like they have been bewitched. There is a word in Sanskrit for it: “naga-pasha”, which means tying up and immobilizing a person (or a nation). You hear of this in the Epics, and its meaning is clear when you realize that the word naga not only means a “snake” but also a “rock”.

Q5: We know by now via scholarship that the Aryan Invasion Theory is false, and motivated by colonial desire to control thinking. From personal observation, I’ve also notice severe psychological effects, in terms of how some Indians from different parts of the country unwittingly have viewed each other either incorrectly or without a sense of the Hindu civilizational connect.  How do we get rid of such theories in our educational system? Right now it seems to be still in our school history books.

SK: I think school textbooks need to get away from the old colonial syllabi that were designed for a purpose that has outlived its usefulness. I believe the lower grade books should focus on the positives of the Indian civilizational area, as other countries do for their own civilizations. Somehow the “naga-pasha” tying up has made it impossible for us to make even small changes in our instructional materials and that is truly horrible for this theory does not have any evidence in support of it.

Q6: Based on your (and others) writing about Newton, do you feel he will be seriously re-evaluated downward? You mentioned the zero only came to be known in the west around the 15th century! And that western Christians not burning down the library of Toledo (containing Indian science via the Arabs) was critical for their progress.  Even CK Raju and many others have covered this.  India’s history seems to have been over-written and distorted in way too many fields!  What is going on here?  Are you hopeful we can correct this in the coming decades? Any comments on how you see our education system changing.

SK: Newton was a complex figure. His alchemy might appear ridiculous to it, but he did some wonderful science also. Newton’s story has a lesson in that the world cannot be seen in clear binaries. I totally agree with you that India’s histories are serious distortion of facts. It would help if there was faster action on the introduction of Indian contributions in school books. A course on history of Indian science should not be political football if it is done with finesse.

Q7: So how did our scientific tradition fizzle in the 2nd half of the 20th century, after producing so many giants in the first half? You mentioned: S Ramanujan, J C Bose, S N Bose, C V Raman, Meghnad Saha, S Chandrasekhar.  You said a study of our history will reveal why.  What history to study to reveal this answer? Are you referring to the Nehruvian socialist set up or something else that kept our science from reaching the heights it could have?

SK: I think the way universities are managed from the ministers in Delhi or in the States has something to do with it. We need checks and balances in the running of colleges and universities, but the way the management has been bureaucratized has damaged the spirit of excellence. After Independence, Indians seem to have been content to play second fiddle to European and American scholarship. I would like to hope that is beginning to change. But there are big problems. Last week, in Kolkata I found out that the faculty size at the Bose Institute is nearly 40% smaller than what it should be because of a bureaucratic rule that if a vacant position is not filled within two years, it gets frozen. Such control does not help in fostering the spirit of excellence.

Q8: “Before the Enlightenment that took place in Europe in the 17th century, we were still ahead in most intellectual fields. The Enlightenment came as a by-product of the turmoil set in motion by unprecedented wealth that was appropriated from America and by a rejection of Church doctrine.”  This is a wow statement.  England was enriched by both the loot of America and then the loot of Africa and then finally the grand prize of India.  Comment.

SK: Apart from these factors what helped Europe was the application of management practices from business and the religious domain to the running of Universities. The Renaissance also promoted a genuine interest in understanding the past and the present.

Q9: In one of your writings you said: “Indian writing is often shallow not only because it is imitative but because it plays on the stereotypes familiar to the Western reader for it is written for that audience.”  I agree, but found it has changed quite a bit, or rather, the better authors were not easily accessible to the public and in our education system.  I found myself falling out of love with some of the most famous Indian writers precisely because of this.  They tended to be liberals, Anglophones.  It is when I bumped into the more Hindu writers that I got a real feel for how incisive and honest and unique Indian writers are, the ones who aren’t blind imitators.  Comment.  Which Indian Hindu writers did you find opened your mind? (Sita Ram Goel, Ram Swarup, or….?)

SK: I think Indian writing has also suffered because India is still behind in publishing industry that promotes serious research. In the West the university presses fill the gaps that trade publishers leave. Indian universities barely do this. Good scholarship needs an ecosystem that covers authors, seminars, funding sources, editors and publishers. Not all elements of such an ecosystem are in place in India.

You mention Sita Ram Goel and Ram Swarup both of whom I got to know well after my own work on Indian science had already been published both in the West and in India. Therefore, they were not a direct influence on my scholarship.

Q10: In your Indian Foundations of Modern Science, I was intrigued by the very nature of colonialism.  Without stealing from Indian science (Jesuits and the Kerala school, for example), and also being able to drain Indian’s wealth to fund Western Europe’s scientific advancement, the imperialism would never have had the success it had on India.  And the armies of Islam creating a situation where defence of the land was that much harder. Agree?

SK: By the time the European university as an institution became mature, India was too weak to develop something similar. One should not forget that India went through a catastrophic process of impoverishment  during the British Rule that saw the Indian share of the world GDP plummet from about 25% in 1800 to barely 1.4% in 1914. During this period, as the collective memory of good times was erased,  people got used to depending on handouts and jobs and society lost its vitality.

Q11: If Asavakas are the old Hindus of Gandhara, Asavaka to Ashfaq (a common name) to Afghan becomes interesting.  Does Ashfaq mean Afghan? So Ashfaq and Afghan are actually Hindu in origin?  Which Muslim names have possible Hindu origins?  We know the suffix –stan is incorrectly attributed away from Sanskrit, and is assumed Muslim.  Even Iran is an adaptation from Arya, which I think the Iranians admit themselves.

SK: I do not know of the relationship between the names Asavaka and Ashfaq, but surely many Persian names can be seen to be genetically connected to Sanskrit originals if their earlier forms in Avestan and Gandhari are examined. Let’s just consider the Persian name Khurshed which means Sun. The history of its derivation: Sanskrit svara (Sun) => hvare (Avestan) and kṣaita (m. radiant, prince) => xshaeta hvarexshaêtahe [hvare-xshaêta]= radiant sun in Avestan => Khwarshēd (in Middle Persian) => Khurshēd/Khorshīd in Modern Persian. We can do this analysis for most Persian names.

Subhashji, that is a lot of questions, and I assure you I could add another dozen, and I’d only be getting warmed up. We can cover other topics, including Kashmir, Languages and Artificial Intelligence, in another round, if you permit.