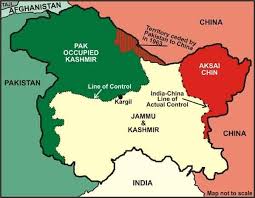 The Politics of Jammu and Kashmir

Let us start with the often brought-up plebiscite which never took place. The plebiscite was voided because  a) Pakistan refused to comply with the precondition of the 1948 UNSC resolution for all its forces, which had invaded the region, to withdraw and restore control to Indian forces in order to organise a plebiscite under a neutral UN administrator; b) Pakistan has changed the demography of the region it had conquered completely, by settling people from the Punjab in large numbers, so no voting by only its original inhabitants is possible any longer; c) Pakistan also gifted a huge area in Gilgit Baltistan of J&K to China in 1964, voiding the legal possibility of a plebiscite by the inhabitants of J&K since Pakistan had transformed the territory to which the UNSC resolution of 1948 pertained.

Nevertheless, India under Nehru offered a plebiscite in 1954, only insisting on a Scandinavian administrator. Pakistan feared it would lose the vote because ordinary people of J&K remembered the war crimes of rape, abduction of women and girls and looting committed by invading the tribesmen from Pakistan. Pakistan therefore said it would only accept the American admiral, Nimitz, to administer the plebiscite. And the plebiscite was not held as a result since India sought a neutral administrator.  It might also be recalled Pakistan had been resisting the idea of any sort of popular vote to determine the wishes of the people of Jammu and Kashmir from the very outset because the leadership of the major political party, the National Conference, was favourable towards India.

Both subsequently have agreed under the Simla accord of 1972 that all negotiations between the two countries would be bilateral, without any third-party involvement. All Pakistani governments had accepted the Simla accord provision of bilateral negotiations and PM Imran Khan is the first Pakistani leader to have rejected it in the past few months.

Jawaharlal Nehru’s decisions over J&K were some of the greatest disasters suffered by India in millennia. By failing to continue expelling marauding Pakistani Jihadis, Nehru surrendered India’s land access to Afghanistan and gave away a strategic advantage to Pakistan of inestimable value. A decision to continue fighting in order to liberate J&K would have been difficult, because India was coping with the disruptive horrors of partition, but a wise statesman would have understood its vital significance for India in the long term. In addition, the foolish decision to take the issue of J&K to the UN was another attendant error of immense magnitude that froze the status quo, hugely favouring Pakistan. It is suspected both these decisions were made by Jawaharlal Nehru at the behest of Lady Edwina Mountbatten, who had been used by the British government as a ‘honey trap’ to compromise Nehru and cloud his judgement.

It is also worth repeating that J&K’s accession to India was legally correct, in accordance with a procedure for the princely states on independence, which had been agreed at Mohammed Ali Jinnah’s instance.  He was initially confident that the Maharajah Hari Singh of J&K might foolishly choose Pakistan because Nehru’s cussed insistence on making his friend Sheikh Abdullah prime minister a priority, over even the issue of accession, despite the fact that he had been imprisoned for revolt by Maharajah Hari Singh, which enraged both him and his Prime Minister.  But the situation went awry and a new prime minister was appointed.  But Gilgit-Baltistan was handed over to Pakistan by the British government in London because of its strategic importance. Local British army officers were instructed to forcibly expel the legally empowered authorities and the forces of Maharajah Hari Singh.

During the Indo-Pak war of 1965, Pakistan was poised to seize the whole of J&K. Its army was on the verge of cutting off Jammu from India, in a series of moves by a brilliant Pakistani General, Akhtar Hussain Malik. Once Jammu had been taken India’s position in Kashmir itself would have become untenable. But the government of Pakistan recalled the General Malik who had brought them close to victory in Jammu because he was an Ahmadiyya and it could not stomach the idea of an Ahmadiyya becoming Pakistan’s greatest military hero. He was replaced by General Yahya Khan who later presided over genocide in East Pakistan during 1970. And Jammu was saved in subsequent military encounters undertaken by the Indian army. It might also be noted in passing that the Pakistani army was also in a position to force the Indian army to withdraw from the Punjab and surrender Amritsar. But the brilliant Indian Sikh senior commander, Lt. General Harbaksh Singh, ignored orders from the high command to retreat and defeated the Pakistani forces.

On the current situation in J&K, it is relevant to note that the Indian Union has a legal and moral duty to intervene to uphold fundamental constitutional norms to protect the Pandit minority once ethnic cleansing had occurred. The Indian Union and the citizens of India as a whole are obliged to prevent a local majority from committing egregious crimes. Dominant sections of any group are not permitted to commit genocide because they are in the majority. India is now seeking to reach a permanent solution to the J&K imbroglio and it has adopted pragmatic and wise policies to achieve it. It will be opposed by global Jihad and the path will be difficult but such a historic transformation cannot be attained without cost.

One Reply to “The Politics of Jammu and Kashmir”