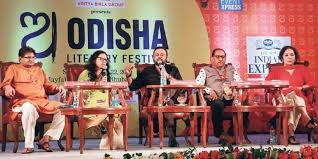 With the BJP government returning for a second successive term in 2019, there was hope in terms of addressing inaccuracies in the history education on offer in India, yet with little progress to date.  HRD Minister Prakash Javadekar a year ago even proudly proclaimed that “(the BJP had) not rewritten a single chapter in the last four years”, an assurance not well-received by many, other than perhaps those of the Marxist-liberal school.

Discussion on Indian history continues to be a hot topic, with the recent Odisha Lit Fest 2019 having a panel: “The History We Were Taught: Bunkum or Brilliant?” Participants included Indian history and comparative religion expert Sanjay Dixit, Ratan Sharda of the RSS , Lutyens’ well-known journalist Saba Naqvi, as well author Samhita Arni.  Readers will be familiar with the political leanings of the first three, so one hoped to see a genuine exploration.

It was a little disappointing that the discussion ended up quite sub-standard. Perhaps not surprisingly, Saba Naqvi can take “credit” for this.  Her point that “right wing history would not be accepted at any international university” tells you more about the legacy mind-set in Lutyens’ media, and the state of history departments in both Indian and foreign academia, rather than whether the history is directionally accurate or not.  Sanjay Dixit’s response: “(I am) about to laugh at Saba for saying the West is the gatekeeper of history, on what is allowed and what is not allowed”, raises a central point. No country should be writing history based on whether foreign gatekeepers approve of it; rather it should be based on objective and rigorous scholarship.  In India’s case, why should it not be from a native view?  Saba’s constant interruptions aside, her answer suggested that primacy was to be given to the foreign, the colonial-approved view.

What is Saba hiding? From Independence, the native (which is typically a Hindu) view has been side-lined. Education ministers such as Maulana Abul Kalam Azad (Nehru) to Nurul Hasan (Indira Gandhi) had ensured that colonization was largely “sanitized”, with dubious narratives, as well as false glorification of less than stellar albeit pivotal figures. This includes an obsession with whitewashing Islamic rule.  Simply calling it a “right wing” Hindutvaadi view has enabled motivated political operatives to avoid discussing the atrocities on the native of India, and especially the ideologies behind it that run rampant till today.  Ratan Sharda’s example about the false dating of Indian history to suit Biblical chronology was accurate, yet wilfully ignored.

People like Saba Naqvi need to be called out not just for perpetuating false histories, but also for being insincere panelists.  It is also quite common for Indian liberals (typically Westernized Hindus) to use the “we must move forward rather than look back” excuse. This too is a political lens, enabling the perpetrators of atrocities on Indians to repeat their past actions, and escape required stringent responses, given the so far side-lined historical precedent. The final panelist, a young lady of the Doniger-Arshia Sattar lineage, unfortunately added little to the discussion, instead diverting into the off-topic climate change and Tamil Sangam era.  Calling the epics “works of literature (that) are the products of the wonderful ability of our mind” displayed a regrettable innocence of the research and evidence that has been ongoing, especially over the last four decades.  These are indicative that she is not quite in a position to offer suggestions on why and how we should study history (which she did). The YouTube comments (“Greta in 20 years”) suggest the Lit Fest can be more serious about where her talents can be utilized, on some other panel.  Here is one: “Global Warming: Hoax or Real?”

Meanwhile, last week, Home Minister Amit Shah talked about the need to write our history from an Indian point of view. Whatever one’s political inclinations, his views are directionally correct, and it is left to genuine scholars to not just correct these falsified and side-lined histories, but ensure it is taught in our schools, colleges and media.  Only then are we going to understand that public outrage over atrocities (e.g., the murder last week of Kamlesh Tiwari, and countless others) is part of a long pattern.  The academic and media casuistry at denying these historical impulses will then become clearer, while defiant gloating over such crimes are to be severely discouraged.

Several countries have enacted stricter policies and laws against the church and Islamists in recent years.  A few include Ireland, Northern Ireland, Slovakia, Japan, China, Hungary and Poland.  More are likely to follow in the coming years.  India will not be doing anything unique here, other than protecting all of its citizens. This will keep both non-religionists, as well as co-religionists (who are often targeted for speaking out) safe, something false histories fail to do.

The History We Were Taught: Bunkum or Brilliant, Odisha Literary Festival 2019

High Time we Declare JNU a Crime Scene and Cordon it off, Sandeep Balakrishna, October 2018, dharmadispatch.in