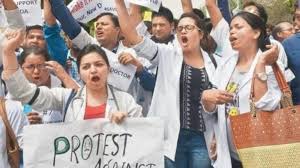 Mamata Banerjee’s opportunistic use of communally charged gangs is slowly turning West Bengal into a Taliban-like state. Though claiming to be a student of Islamic history, she has not learnt from Gandhi’s Himalayan blunder of supporting the Khilafat. She seems no longer in control of the state.

It is now anarchy in West Bengal. Mamata Banerjee is no longer in control of the forces she let loose to suppress the opposition. Her fear is that the BJP seems to be gaining in popularity and may some day, possibly as early as 2021 replace the TMC, just as the TMC replaced the Communists in 2011. Its latest manifestation is the attack on junior doctors launched by TMC goons, making it impossible for them to work.

The media has tended to downplay the fact that her gangs are mostly Muslim goons, many from Bangladesh. Here is the story as reported by an eyewitness. All this is well known, though largely suppressed by the media:

An  elderly cardiac patient, Mohammed Shahid, who happened to be a Muslim died in the medicine ward of NRS Medical College and Hospital. Enraged patient party thrashed the junior doctors in-charge. The worst victim of the assault was a young doctor by name Pratibaha Mukherjee.

The assailants barbarically attacked Pratibaha Mukherjee using a stone, with such brute force that his skull cracked.  The young man would most likely have been dead if not for the timely intervention of his fellow doctors. He had to be ventilated and underwent a surgical intervention because of the grievous nature of the injury. Another doctor-in-training sustained a rib fracture and a spine injury, and will lose vision in one eye, ending his future career as a dental surgeon. The mob next went and burned the students hostel.  Soon, a massive state wide resignation of medical staff took place, with support from all over India.

CM Mamata Banerjee had no time to visit the victim or other doctors, for she was too busy inaugurating a five star hotel in the city and was not able to find the time to meet the protesting doctors until several days later.  She would later give bizarre statements such as “why are doctors fighting; they are not fit to fight” and “police don’t go on strike”? Such abysmal statements, just to protect a violent mob who happen to be Muslim?   For decades, the Anglophone Lutyens media in the Nehruvian set-up went about white-washing minority crimes, and playing up the minority as victim narrative. But we are now living in a new era of social media, in real-time and not at the mercy of spin doctors.

The machinery had meanwhile already been set into motion to further rub salt in the wounds of doctors by Mr Rajiva Sinha (Addl. Chief Secretary) who put out a press release (No. HS- 34/19) that read “This is an appeal to the good senses of the agitating junior doctors”, he further lectures the doctors by stating “…health is an emergency service and any disruption in providing this service to the needy is not desirable”. Should it not be perceived as a veiled threat?  The doctors were not asking for too much, only safe working conditions.

Why did the Police not appeal to the good senses of the mob? Why did not the worthy Chief Secretary sitting in his air conditioned office come out and meet the ransacking mob and appeal to their good senses? Why does not Mr. Secretary provide police services to ensure safety of working doctors? Couldn’t he have prevented all of it? Now coming to the most humiliating part of the press release which states that “All 5 accused have been denied bail by court and sent to police custody”.  Only five, coming in two loaded lorries?

Such is the high-headedness of CM Mamata Banerjee that she has now threatened the students that she will throw them out of the hostel. She even had the gall to charge that the doctors (but not the goons) were outsiders. Are we supposed to believe that doctors came from outside the state, only to be assaulted and then go on strike? The name Pratibaha Mukherjee clearly suggests he is no outsider.

None of this could have happened without premeditated planning and full support of Ms. Banerjee. The question is: to what purpose? Some friends who know Bengal tell me she wants the Central Government to dismiss her government so she can pose as a victim in the 2121 state election which she fears she might lose.

Not learning from history

Ms. Mamata Banerjee is claimed to be a student of Islamic history. If so it is clear she has not learnt any lessons from it. She is trying to use Muslim gangs to further her political ambitions which may include becoming prime minister of India with Muslim support. In this she may not succeed, but her state will remain prisoners of blackmail by the Muslim gangs she has let loose. This is the real issue; acting against the protesting doctors is just a pretext.

Here we can learn from Gandhi’s Himalayan blunder of supporting the Ali Brothers on Tilak’s death a century ago. He thought he could become dictator of the Congress, which he did, by gaining support of the Islamists. As Sir C. Sankaran Nair pointed out in his book Gandhi and Anarchy, instead of using them, Gandhi and his party would end up becoming themselves prisoners of the Islamist leaders and their gangs. The result was anarchy and the catastrophe of the Moplah Rebellion.

There is some evidence suggesting that the British encouraged him to gain control of the Congress to neutralize the militant freedom fighters, whom both Gandhi and the British called extremists.

The long term effect was that the Congress went from being a pan-Indian party (with some nationalist element in it) to a minority appeasing Muslim vote-bank party with an anti-Hindu heritage outlook, a situation that persists to this day.  Ms. Mamata Banerjee is repeating history; a century ago, the results  were horrific.

The Islamic onslaught in West Bengal: A saga that started long before the current state regime made it worse, Kartikey Gaur, OpinIndia, June 2019