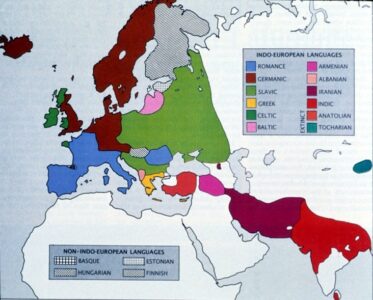 It is rational to discard the notion of languages as formed by branching from a single root. More likely, they came into being by the coming together of existing languages, as English did from Saxon and French. Some like Greek, Latin and possibly Sanskrit might have been carefully constructed for liturgical purposes.

Map of IE languages: the blank (white) portion in India belongs to the Dravida people and languages

Just as there is no Aryan race due to any invasion, and no Dravidians subdued by the invaders, we find also there are no ‘Aryan’ languages brought by invaders. What we have instead are regional languages that evolved over a very long period—50,000 years or more—after our African ancestors settled in India, perhaps 60,000 years ago if not earlier. More particularly, modern Indo-European languages themselves branched out of Indian languages when Indians migrated to Central Asia, Eurasia and Europe.

We can forget the current theory about Sanskrit being a branch of Proto-Indo-European introduced by the invading Aryans. It is crackpot theory born out of race prejudice and colonial interests. They simply could not stomach the idea that their languages had owed so much to India and Sanskrit. Also, we just saw that Indo-Europeans themselves originated in India and could not have brought Indian languages into India! (Unless they happened to make an abrupt U-turn and headed back home. Even then they would only be bringing back the language they had just taken from India!) Fortunately science can help us though we still have a great deal to learn.

Earlier in this series, the two egregious blunders of European linguists were covered. This point – the closeness of the so-called Dravidian languages to Sanskrit – needs to be emphasized, for keeping the two separated continues to be part of a political and academic agenda. In truth, there are no reasons to suppose that Gauda and Dravida languages including Sanskrit had ever remained in separated exclusive domains. Some covert Aryan theorists like Thomas Trautmann go to the extent of claiming that the Dravidian family was ‘discovered’ by Bishop Robert Caldwell in 1835, just as Sanskrit was ‘discovered’ by Jones in 1786. The truth is by then they had a two thousand year history of coexistence and at no time were the Dravida people ignorant of Sanskrit. Then as now it was cultivated all over India. Sanskrit was never a regional language.

The key is to recognize language evolution as an inseparable part of human evolution, especially in primitive societies where the means of communication was limited to speech and memory. For 50,000 years the people of India, as elsewhere lived mainly by hunting and gathering.

Towards the end of the Ice Age, about 11,000 years ago, agriculture originating in tropical Asia (India and Southeast Asia) replaced hunting-gathering leading to much larger populations. Important domestic animals including the horse were also domesticated in the region (There is no truth to the claim that horses were unknown in India before the Aryan invaders brought them) There were now several languages in north and south India which my colleagues and I call Gauda and Dravida languages. (Arya would be an inappropriate term)

There were two major developments during the Holocene, or the period after the Ice Age 10,000 years ago. First, there was intense activity leading eventually to the creation of the Vedas and the language that became Sanskrit by incorporating features found in both northern (Gauda) and southern (Dravida) sources. This accounts for the so-called Dravidian features found in the Vedas as well as the closeness of Dravidian grammars to Sanskrit grammar. The other was a second wave of people out of India who took with them both Sanskrit related languages and agricultural skills along with domestic animals including rats and mice! This accounts for the closeness of Sanskrit to European languages, in vocabulary if not grammar.

This means there were two major waves of Indo-Europeans, both out of India into the north and west. We know of the first (c. 45,000 BCE) only from genetic studies of modern populations around the world. We have no idea what their languages were like. The second, and much more recent, occurred at the turn of the Pleistocene-Holocene transition some 10,000 years ago. It has left many traces in archaeology, genetics, culture, and above all in the Sanskritic imprint on the languages of Europe and Eurasia. This is supplemented by genetic and other scientific data relating to animals that accompanied them including of rats and mice!

In summary, like its people, the languages of India also are indigenous evolutions until the coming of Turkic and Persian in medieval times, and English in the modern. Neither caused any breaks but only adaptations as Indian languages and culture continued. Both Northern (Gauda) and Southern (Dravida) languages are ancient and native and have always coexisted. Both Vedic and literary Sanskrit were created by borrowing elements from Gauda and Dravida languages. That is why it is called Samskrita meaning compiled or constructed. This means India’s cultural unity is also of the same antiquity, which is our next point.

(to be concluded in part 4)