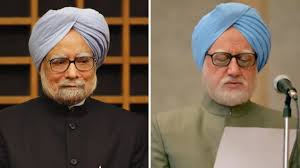 The cinema fare in this pre-election cycle has been most interesting, with Uri as well as the The Accidental Prime Minister raising some level of awareness about the workings of our government.  A few critics have chosen to call the latter film propaganda, but that hides some key take-aways.

This is not a Manmohan Singh biopic.  An objective critique of his life is yet to be written, and when that happens, it will become somewhat clearer that his conduct as India’s PM was actually quite in line with his earlier life.  The film paints a relatively positive image, while the book though critical in parts, reveals a lot more than what the film offered.  Both the author of the book and the director of the film, with their focus on the UPA years, are barely scratching the surface of a long pattern of behaviour that is far from “honourable”, “decent” or “classy”.  Such descriptions are more a reflection of the Delhi durbar’s subservience to India’s parliamentary monarchy, than to the man himself.  From the book, and other sources, one also gets the following: naïve on J&K, foreign policy dud, treacherous, fiscally irresponsible, not respected, and spineless.  Sanjaya Baru does mention that the entire Delhi durbar “had all profited in one way or other, over the years, from their loyalty to the Congress’s first family”.  Yet, almost nothing is mentioned in the book or the film about the missionary-NGO complex and Sonia, a glaring omission.

Missing PVN Rao.  If only a film was to be made about the Narasimha Rao years, to show the contrast in his handling of Sonia and other power-brokers, then the false cloak of honour and decency would become glaring.  But then, the Nehru dynasty sycophants don’t mind being lackeys, with one leading figure offering that the Congress leadership is “inextricably linked” to the Gandhi family, while the latest family member parachuting in as party general secretary is called a “masterstroke”.  To hope Dr Singh had followed the Rao example, while risking his future stature within the party or his place in history, was clearly expecting too much.  This is a deep indictment of the very character of Manmohan Singh.  He would have seen first-hand, and would have gone out of his way to avoid the kind of humiliation that visited Rao and his family.   Manmohan Singh was not a shadow on the “Half-Lion”.

The Delhi durbar could not care less.  The feeling of helplessness, watching how the ecosphere operates.  Regardless of available evidence to the contrary, lies keep getting peddled as truths.  Durbaris proudly receive insults and challenges from the general public as compliments, often offering mocking confirmation that they are Macaulay-putras, anti-national, or are concealing the truth.  One would think these are certainly not light insults to be laughed away.  For example, on the choice of Manmohan Singh, Baru mentions that “…had Sonia Gandhi not been born an Italian, she would have kept the job for herself…” This says a lot about the Lutyens durbaris who keep peddling this “sacrifice” myth even today.

The fact that India’s oldest ruling party cannot come up with anything other than its monarchy’s descendants as the lead is a reflection of the power circles who prop it up and benefit tremendously from this arrangement.  But the real shame here is that this Congress nurtured durbar makes little attempt to hide this blatant and defiant sycophancy from the public view. And for actively enabling this during his own tenure as the leader of India, the halo around Manmohan Singh should have crumbled by now, except the durbar keeps propping him up, in line with their continual glorification of false heroes.

When one well-known Mumbai film industry critic noted that “this country needing a better class of propaganda”, it was her own review of the film that was correctly dismissed by one YouTube commenter as “The Accidental Movie Reviewer”.  Some criticisms on the technical side and the flow of the film are warranted, but this is really beside the point. It is not going to be considered a political classic in the same league as the 1969 film Z, by Costa Gavras.  And the reader can simply drop everything and watch the brilliant 2006 Malian film Bamako by Abderrahmane Sissako, which shows tremendous passion, emotion and logic as it gives insights into the destruction of Africa by the western banking cartel.

The main silver lining here is that films such as these are getting made in India, and so close after the passing of the actual events. If only durbaris wouldn’t try so hard to discourage people, especially youngsters and amateur history buffs, who will benefit from a watch. And if the timing of its release is an attempt to hurt the dynasty before an election, are we still living in an age where this is prohibited? We are also reminded of the multi-century problem in India’s history, with so many missed opportunities to fully evict, if not make redundant, alien rulers with permanent extra-territorial loyalties.

A factual account of the life of Modi would be most welcome, but the one that will break all records is on the Life of Sonia. Perhaps this film, if it does get made objectively, will also be laughed away by the durbar.

Why nobody sat on the same sofa as Sonia Gandhi, Hardeep Puri, theprint.in, February 2019

The Myth of the Renunciation, Krishen Kak, Vijayvaani, March 2011

Call for the trial of Manmohan Singh and his Foreign Policy team, Tufail Ahmed, IndiaFacts, December 2016