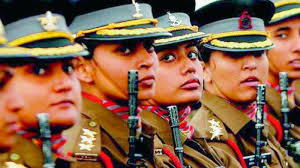 Feminism and the Indian Army

In the previous part, we explored feminism and its silence on war. If the average reader is not yet convinced that feminists being silent on imperial war is an issue, then it is something to dwell on, to park, as its linkage may become apparent with time.  There are other issues that do require our attention.

In mid-December, the Indian army’s General Rawat spoke to CNN-News18, and was asked regarding women in combat roles in the Indian armed forces.  He responded that women are already in combat roles such as mining and demining, manning air defences, and several other tasks (including women fighter pilots).  He also clarified that the country may not be currently ready to have women commanders specifically in front-line combat.  One initial reason given was that most of the common soldiers (jawans) were men from villages, and they may not be ready to be led by a female commander on the front-line.  In addition, a “peeping tom” issue was prevalent not just on the front-lines, but away from it.  He also asked the interviewer what she felt regarding the practicality and fairness of restricting women commanders from getting pregnant during their front-line combat tenure.  At several points, General Rawat stressed that it is not that the army is not ready overall, but rather that it may take time to work these things out for front-line combat. On the face of it, these do seem like somewhat sensible responses, until we consider how feminists in the media responded.

In fairness to the News18 team, they too concurred that the logistics of allowing women into front-line combat are currently overwhelming and need time to be worked out.  In addition, not only did the team acknowledge that the Indian army is largely a “peasant army” but the situation where female front-line officers are taken as POWs would become very precarious to deal with. Further, they mentioned that there was no need to get outraged, but rather to have a serious debate.  On this point, perhaps the news channel could have done the public a service with some of the research that is presented here.

Unfortunately, the responses on twitter and in articles by feminists tells quite another story of the triggered reactions we have become accustomed to. Here is a sample: “chauvinistic, illogical and factually untenable”, “infantilising women”, “exposed his regressive mind-set”, “tends to normalise privacy intrusion of women”, “Like sexual harassment & pregnancy are a design flaw in women!! Regressive BS.”, “tragic for us Indian women that the men are also aware that women have no guarantee of safety anywhere”, “But at least the (Navy) chief conveyed that the navy has no prejudice against women”, etc.

One article (“Dear Bipin Rawat, Let’s Talk About Strong Women”) indicated that the writer may not have watched the interview at all, as she misquoted his statements, using standard issue feminist jargon: “…Rawat didn’t limit himself to women in the army, but included all women in his assessment that they’re unfit to handle challenging or conflict situations…”.

Let us examine whether General Rawat’s concerns were reasonable, regardless of whether his comments came across as not sufficiently woman-friendly for Indian feminists and the Delhi Lutyens liberals who pounced on him.  Here is a sampling of key risks that have been highlighted in western armed forces, all worth a read to get a broader view:

It is important to note that these are observations by female front-line and infantry soldiers, from the assumed “progressive” western armed forces!  Let us stop for a moment and admit: perhaps General Rawat was actually being not just sensible but polite!  These points do not even cover the well-known issue of returning veterans having PTSD and significantly higher suicide rates.  Except here it will be our brave women potentially coming home with life-long disabilities and mental disorders, with accompanying impact on their families and children.  Will sloganeering reassure these returning women soldiers and their families if this happens?

In the future, we may also have to face the issue of suppression of inconvenient data due to political considerations, something the Obama administration has been accused of already. These do not sound like good decisions.  National and border security is not a place where one should welcome just about any voice.

With the sinking of the “unsinkable” Norwegian frigate in 2016, a lot of questions were raised, one being the sheer incompetence of the mostly female crew.  The exact reasons for why the ship sank may have had more to do with the ship design itself, but the reviews of the communications and procedures among the crew indicated “incomprehensible errors” and “making them look like amateurs”.  Since male crews are also known to make errors, this cannot by itself be taken as the only factor.  This incident should, however, indicate to the feminists than even in progressive Scandinavia, such questions are still raised about overall combat readiness and capabilities of women.  It is not simply a “regressive Indian attitude”.

Finally, it is known that during World War 2, women took part in front-line combat.  This needs to be understood in the right context. When much of central and eastern Europe was looking like a killing field, old and young women, along with boys and girls were forced to defend their nation for civilizational survival reasons.  There are also a lot of inspiring examples of women leading men into battle in India going back an entire millennia as it faced multiple invasions.  But that is quite another matter when comparing it to peace-time operations, and hopefully no nation will face scenarios such as this.  The Israeli scenario is also not comparable, as we do not have compulsory military service nor the same circumstances.

What is to stop this unfortunate habit of leading feminists and their desire to apply gender equality to every sphere?  As many of these voices enjoy lucrative careers in the media and NGOs, the likelihood of their own daughters being placed in such situation is quite negligible and comes with little risk.  This gender equality will instead be imposed on village or working class women who are more likely to join the armed forces.  So far, we have yet to see them provide an honest assessment, backed by data and interviews of women in the military, that might suggest that we listen to their views at all.

But let these sane voices of progressiveness not despair! More relatively innocuous testing grounds are available.  Perhaps these voices could try having an all female crew separate brawling men at urban nightclubs, or even replace some of the Indian kabbadi team with women and see whether it enhances performance and improves morale.  To truly win public support, the feminists could go further by having Navjot Sidhu arm-twist Prime Minister Imran Khan into having all women Pakistani combat units on their front-line.

Humour aside, let us agree that perhaps General Rawat didn’t couch his statements in the politically correct language that feminists would like society to use, but this cannot be the point, and it goes beyond the General’s statements. It needs to be emphasized that soldiers are recruited among the best available in terms of performance and effectiveness for national defence, not some liberal philosophical ideal. Will the feminists and Lutyens media liberals admit that they were wrong?  Keep in mind, not only has India had women leaders and heads of state, but also has a woman as the current Defence Minister.  We have already seen the deadly silence on imperial war, and here we see more outcry in reverse.  These type of views reflect not only poor research and objectivity, but will also  endanger the lives of women and men, as well as impact national security.  This is plain irresponsible.

Women in Combat: The Navy Chief Spoke Sense but the Army Chief Did Not, Ghazala Wahab, 21 December 2018, thewire.in

Former British Army commander says having women in the army ‘will cost lives on the battlefield’, Harriet Agerholm, The Independent,10 July 2016

Deployed US Navy Has a Pregnancy Problem, and It’s Getting Worse, Richard Pollock, 2 March, 2017

The response among the public suggests that there are other fundamental issues at play, and these will be covered as this series develops.  This includes women’s safety, society, and men’s rights.