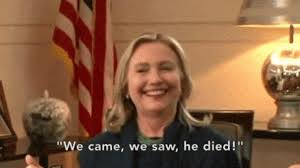 Feminism and its Deafening Silence on War

This article attempts to explore some missing elements and critical questions about what should constitute any women’s movement.  Questions that any society should ask.

Of all the things feminists focus on, the common taglines one recalls include “Wage Gap”, “Equality” and “Sexual Harassment”, to name a few.  “We are just looking for equality; that is all we want”.  This article is not focused on the debunking of the wage gap or the vagueness of this equality ideal, or about shameful sexual harassment.  Rather, the focus here is to explore another facet that is strangely ignored, war.

From Edward Bernays attempts to boost cigarette sales by making smoking cool for women in the 1920s, to the bra-burning free-sex live-it-up messaging that was seen in the next decades in the West, to “former” CIA agent Gloria Steinem and her successors, almost none of the focus has been on women’s safety in war torn countries. That feminism is not an anti-war movement is perhaps not a surprise to some, although why it is not concerned with war at all is perplexing.  Let us examine briefly what happens to women affected by war.

Bombing Women and Children into the Stone Age

The practice of removing the next former-friend-now-brutal-dictator may be a NATO and western routine going back decades, but the fall-out to family, women and children has been beyond devastating.  This imperialistic resource grab led destruction continues well into the future in the form of the global sex trade (including minors) as well as a psychologically traumatized labour pool that is often uprooted, forced to flee to an alien culture where they struggle to assimilate.

Based on past experience, one should not expect the women in Libya or Iraq to recover for decades, if they are lucky. For some, it is not “boat rides” across the Mediterranean but slave markets in North Africa. Syria, who many will be surprised given the shambolic reporting, has a president who has long been quite popular domestically, may recover sooner. But, make no mistake, ISIS and its sponsors have wreaked havoc on the families of Syrians and Iraqis, and on those who became refugees, both domestically and externally.  The imagery of Yemen’s starving children somehow neglects the destroyed women and mothers who could all have used some support from feminists, who uttered barely a whimper. Many failed to understand that western arm sales, political and resource interests played a critical role in the destruction of those societies, via regional proxies who conducted the war.

The 2017 Global March for Women, even when organized in India, strangely turned into an anti-Trump movement, mirroring the western versions. The Don may be narcissistic buffoon-in-chief among many things, yet it is barely understood that there is no worse destroyer of Libyan or even Haitian women that Hillary Clinton and the Clinton Foundation.  To miss such a link, including women and children being trafficked, suggests your SJWs need to be questioned more carefully as they swallow the next round of jargon from their western liberal sponsors and NGOs. By now, it should have been somewhat clear that feminism mirrors imperialistic western politics.  From their silence, should one infer that they don’t quite mind if women and children are bombed into the stone age?

From politics to business and many fields, there are high profile women who have achieved great success, and deservedly so.  We certainly should continue to work to open up opportunities for women’s education and employment that is fulfilling, and does not hinder women’s aspirations.  But let us also not avoid acknowledging that there are troubling examples of women leaders who have created great anguish for women and children, very much on par with the worst of the male examples.

The women of Iraq, the horrifying image of cyclops-babies and other birth defects, they too can thank a woman, Madeline Albright, who in a just world, would be prosecuted for crimes against humanity, in Iraq and in the Balkans as well. Meanwhile, Christiane Amanpour, another role model for women, has never not lied about any war going back four decades, toeing the imperial line every time.    The remorseless laugh of Hillary Clinton as she stated “We came, we saw, he died” when another former ally turned redundant enemy Muammar Gaddafi was brutally killed, does not give confidence about the moral fiber of some women that our young women accidentally look up to.  There are better women’s heroes than these, surely.

There is the troubling aspect of the husband of “Killary”, incorrectly referred to as the “first Black President”, whose own personal track record with women is to say the very least, worthy of censure, if not incarceration if the judicial establishment really had done its job, well before the Lewinsky scandal.  Even domestically, mass incarceration of African-Americans during Bill Clinton’s tenure remained high, as it did surprisingly during President Obama’s term.  Did this have no impact on women in the African-American community? Indeed, President Obama’s track record of destabilizing African countries more than matched those of his European descended US Presidents.  Were the women there unworthy of any attention?

Less Wars with Women: This Myth needs to End

Is there a more genocidal woman’s leader than Queen Victoria who presided over one of the most destructive-for-women phases of the British Empires ‘expansion’ into Africa, Asia, and especially India?  Or was she merely living up to the ideals of men before her who by no means should be revered? Perhaps she was just being competitive, proving a woman can do what a man can do, given that King Leopold II of Belgium was busy destroying Congolese society and its women at the same time.  Congo would arguably be one of the richest nations in the world today, and its women certainly much better placed, yet feminists are barely aware or even interested. What was the role of imperialist women during colonization?  Cheer-leading by women of the aristocracy.

How many countries has the British monarchy participated in the destabilization of, post WW2, largely under Queen Elizabeth and her parliamentary democracy?  Memories may be short but the “Iron Lady” Margret Thatcher was hardly a hero for working class women in Britain itself.  You won’t find any of the feminists considering what will happen to the women of North Korea or Iran if another planned skirmish takes place.  And does a mass killing of men help left-behind women and children?  Our local feminists do not seem concerned: many are paid to read from a script, and it is not in the script.

The Gimmicks of Iraq Apologetics

In the past decade, expressions of sadness has been directed at the Iraq war.  But one should not fall for such tricks.  “Protesting” and “regretting” the Iraq war has now become an “officially approved activity”.  The insincere cries for justice as well as admittance of “failure” for not having the right intelligence has emanated from every single big name public official of the western imperial establishment, including women politicians.  They’ve washed their own hands clean by simply saying we made a mistake. The public, fed a steady dose of lies about the Iraq war, has no real understanding or even memory, to hold the high officials to account. Nor will there be any war crimes tribunals or prison terms, both of which will have leading women politicians and supporting journalists as deserved “recipients’.  Instead, some get high awards, including the Nobel for Peace.

Real “regret” should be expressed in the moment, or before, not in a “safe space” that is well in the future.  For example, what is happening now in Syria and especially Yemen is unconscionable.  Suzanna Arundhati Roy is one of many examples who has maintained at best lip service to her pretend anti-empire credentials (she most certainly is not anti-imperialism, but that would be another topic), and at worst, typical radio silence.  One could go on and on about the feminist silence on war, but there are other pressing questions that feminist leaders should be asked.

Let us explore this further in the next part of this series.  As this is no easy topic, the reader is advised to spend some time watching takes on feminism from leading comedians such as Bull Burr, or even the notorious Ali G.  This might help lighten the mind a little, as some of the questions that need to be directed at feminists may be unpalatable.

Why No One Cares About Feminist Theory, James Lindsay, January 2018, Quillette