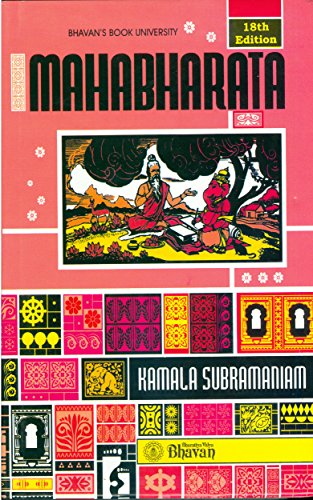 On Reading the Mahabharata Again

Great literature resides in every corner of the earth. As for India’s great epic, The Mahabharata, it is not something one simply reviews. It goes well beyond; it is India’s gift to eternity.

It had been over a decade.  So I reached back to read another abridged version, Bharatiya Vidya Bhavan’s publication of Kamala Subramaniam’s Mahabharata, the 20th edition reprinted in 2017.

Should one read yet another abridged version? In this writer’s view, yes.  With the passage of time, different aspects, especially those on conduct, will appeal in newer ways and continue to serve as a guide, while the story refreshes itself across the lifespan of the reader.

The child in India has long known this story through various sources and versions.  We are indebted to the numerous storytellers, researchers and gurus who have done the deep work of keeping it alive generation after generation, over millennia. As one gets older, the great accounts of the battle for dharma become even richer when one becomes familiar with the advice of the great teachers within the Mahabharata who stepped forward to offer timely (and occasionally late) counsel, suggested compromise and reminded us about the nature of righteous conduct.  Compared to Dhritarashtra and the early-passing Pandu, here the comparatively lesser-known third brother Vidura shines as the embodiment of wisdom.  But is he successful?

The first parva (volume or book), Adi Parva, lays the foundation, sets up the story.  It is here where one gets an idea of the protagonists and how they are related in a complex matrix across generations. Why go through so many years and not get these fundamental inter-relationships clarified? Let it be a case of:  at last, I have understood who these other characters are; they are no longer unknown entrants into a vast narrative.

Readers may differ on which of the 18 volumes appeals more to their sensibilities. Along with the foundational Adi Parva, it is the fifth volume, the Udyoga Parva, that this author finds most riveting. The war is not inevitable, as the intense discussions shine a spotlight on reason, and the moral character of the protagonists. There are those who will take the right path, and those who know the right path yet can’t help erring. And then, there are those who will bend dharma regardless, a reflection of society ancient and modern.

Everyone will eventually have a favourite with Arjuna, Karna, several others, and especially Krishna typically held in the highest esteem.  But most general readers will have missed the complexity of the inescapable central character who chose the less righteous path.  This is not to say that Duryodhana has been misunderstood, but rather that he could be viewed as a depiction of the nature of powerful humans in authority that we encounter today. As we are reminded, there is no cure for avarice (extreme greed for material and power), yet it is not the only avoidable vice.

The Kaurava King is hardly sitting in a corner with an evil uncle, quietly plotting ruin.  He is perceptive and logical, popular and fair among his allies and even subjects, and understands what is the right path forward.  But sharing what he considers his own rightful kingdom is not for him.  Each reader may interpret differently, but it is fascinating how Duryodhana is able to rationalize, even convincingly at times, into declaring: this is mine, accept my right to rule, or come and take it away from me if you must. For as long as he has his many allies, elders and especially the generous, unerringly loyal and invincible Karna by his side, he fears no outcome, and fully expects to remain King. Like many modern errant politicians and leaders who crave and hold on to power at any price, he is both slow and quick in acquitting himself, even in the face of insurmountable evidence.

The bow-tapping of Karna as he releases his own brothers, telling them to never forget the moment he let them walk away alive, will bring another set of emotions.  It will not surprise that it is impossible to remain stoic as the final days of the war, and its aftermath, are retold.   I quite loved being introduced to his other name, the one preferred by Ms. Subramaniam, Radheya.  His chariot wheel eventually gets stuck, and we know the rest.  The effect of the unveiling of Radheya’s origins at critical junctures to different protagonists is bound to make the heart heavy, especially considering his own unswerving sense of duty when he could have chosen an easier path. Yudhishthira too is revealed, as his tense interactions within family, especially with Draupadi and Bheema, clarify that he is hardly naïve, or lacking in reason or courage.

The centrality of Krishna need not be stated.  Just the knowledge that he is thinking, leave alone active, one knows that the earth is about to spin a little differently.  A mild surprise, perhaps for the uninitiated, is that Krishna is not just wise, but also human, in a very complex position.  The Gita is covered briefly, and should be studied in depth separately, for Krishna’s spiritually revelatory discussions with Arjuna.  For indeed, he is jagadguru, the universal guru.  Again, multiple teachers abound, and one can’t go wrong listening to the counsel about righteous conduct by Vidura to Dhritarashtra, and on governance by Bheeshma to Yudhishthira towards the end.

Rashomon-style multiple perspectives are interspersed throughout at key moments.  Rather than seeing them as unnecessary, they can be appreciated as useful, even required, repetitions.  As many have pointed out, one doesn’t simply read, but lives through one or several of the characters within.  The symbolism, metaphors and literary techniques will need their own interpretation, and will raise additional questions in the interested, who hopefully will go deeper, as all authors of abridged versions advise.

We are indebted to several who have kept it all alive, not just our gurus, but V. S. Sukthankar for his Critical Edition, which over decades and almost a century later, has spawned arguably some of the most enjoyable retellings today via many sincere authors. Several interesting interpretations await, including those by S. L. Bhyrappa, Saiswaroopa Iyer, Aditi Banerjee, and more.  The battles within academia on the subject of German Indology too will lead many committed scholars to recognize the extraordinary intellects of Vishwa Adluri & Joydeep Bagchee.  That is an exciting  progression.

If there is at least one recommendation for any version, today’s public is ready to keep several key Sanskrit words in their original form, untranslated. Also, one can only hope that people are sufficiently aware not to unwittingly gift versions of Indian epics that are insincerely (and mischievously) authored by the Wendy Donigers and Sheldon Pollocks, or the students in their coaching tree.

We are ever grateful to Ms. Subramaniam and the legendary K. M. Munshi for keeping this version alive in the public sphere. In effect, dear reader, do not delay. It is time for a re-read.