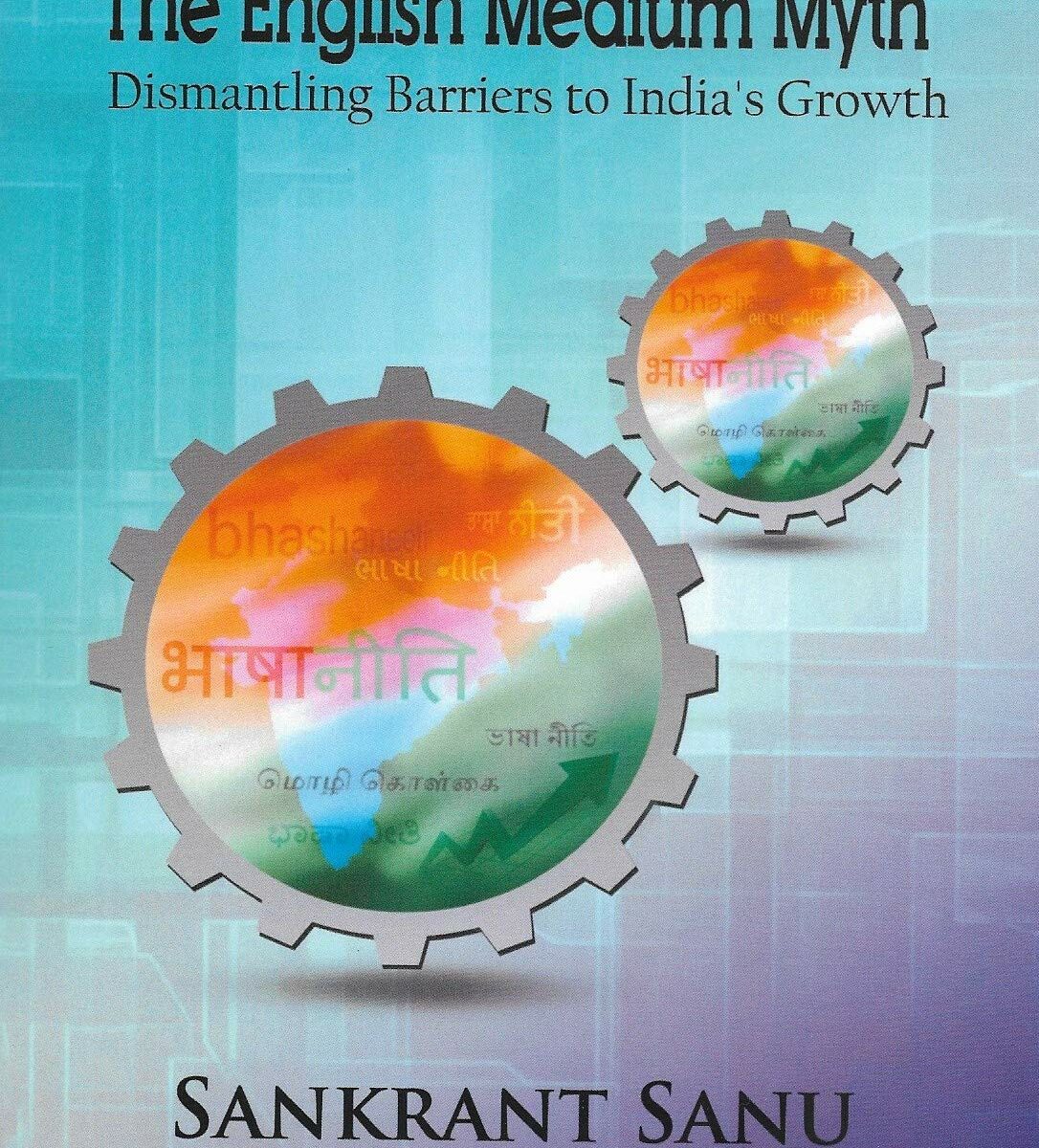 Responding to The English Medium Myth

The English Medium Myth (TEMM) is one of those books you can read in 90 minutes flat but, like many short books, it will likely take longer.  As one of the rare contemporary works on the medium of educational instruction in India, specifically about using an alien colonial language like English, there is much to pause and ponder over.  Sankrant Sanu builds on the works of other great thinkers including Dharampal and Kenyan writer Ngũgĩ wa Thiong’o, whose classic Decolonising the Mind: The Politics of Language in African Literature (1986) should not be missed.

Unfortunately, most reviewers of the language-in-education question have approached it from their own political or personal lens, and not in a grand visionary way that the Indian public deserves. The author raises a point that will resonate with the “lucky” amongst us (including this reviewer) who were raised with access to somewhat good English: if being good in English gave the author special privileges, why would he want to overturn that?  Here is the humane response: because we should not be making 90% of Indians made into second class citizens, or linguistic cripples.

A true believer in equality and a champion of eradicating “class-conflict” would ideally understand and push for advanced education in India other than mainly through English.  Except that our left-liberal champions are more likely to push for English, and as far away from Sanskrit or Hindi or any other Indian language, with little acknowledgement of the negative effects on our young learners that will inhibit their capabilities for decades.  If anything, with all the Western influence, India’s “English-women” and “English-men” haven’t proved themselves more capable than their non-English expert peers in critical subjects such as history and national heritage, and certainly not in the technical fields.  Many have simply been rewarded for imitation, with rules of acceptability mirroring an updated neo-colonial legacy.

Sanu’s point is worth pondering over: have we Indians spent an inordinate time learning a foreign language rather than a useful skill? Often we hear Indian engineers “are not good with their hands”. While this has something to do with the quality of engineering and technical education at 3rd and 4th tier colleges, often with sub-standard faculty and learning material, it is also likely that many have also focused on that all important skill: communication. With MNCs being prime posts when not getting into local politics or government jobs, what we have is marginally good foreign language speakers but with significantly lower practical skills, including in finance, medicine, and so forth, as the author points out.

There are psychological effects of developing an unhelpful superiority that accompanies a debilitating inferiority, a temporary entitlement among a few in India that I “know better” because I speak better English, dwarfed by “I am never good enough” that affects a far wider section of society.  In our society of multiple languages, the last thing you want to do is to disenfranchise the spirit of almost all its members yet, as this book enumerates, this is what has been done for decades.  Instead of a visionary approach, our leftists and liberals have had 70 years of myopia to their credit, to go along with the willing distortion of our history books.

One page 60, Sanu mentions how he once gave a lecture in Hindi to IIT students, and had one come forward and tell him it was the first lecture he had fully understood.  I too have had such experiences, having had a few hesitant-in-English employees. Once they understood, despite my own clear anglicized voice, that I would eagerly seek their views and converse with them in their own language and encourage ownership, they ended up over-extending themselves, and built successful careers.  But these are among the luckier ones, as there are literally millions more who should be in this funnel, of learning and engaging through a medium that is most familiar to them, in an environment that does not penalize them directly or through HR and employment agency filters.

In an anglicized world, how did so many men and women of India’s prior two generations, many of whom did not have access to a college education, manage to run not just families but actually strategize and plan the futures of their community?  Many managed somewhat complex financial transactions including planning and saving for a child’s education, making investment decisions, handling insurance, buying their first home, and so forth. I’m reminded of many who would humbly state “I’m not educated but…”.  I would remind these elders that they are far more capable than they realise, and are also lucky that they used their own faculties and never stopped learning.  In fact, they even avoided the trap of “mis-education” and over-confidence, and retained their humility in the never–ending quest for knowledge.  But mis-education is also evident when you don’t talk to youngsters in the language they expressed themselves in during their most formative years.  We also observe a tremendous loss of inter-generational passing of knowledge when children are dealing with advanced subjects in an alien language, but aren’t able to tap into their own community.

If you think this is only for English, then try taking advanced psychology classes without a background in statistics.  Else ask any corporate expat what he avoids for his next job, which is to avoid the tandem of new role for which he is not skilled, and new culture/language where he cannot communicate adequately with colleagues.  Even CXO level corporate employees know this, yet we subject our rural children as well as many urban children to it.

We are also missing out on a simple idea which is that, over time, Indians who have exposure to other language groups ending up being multilingual, with varying capacities.  Many urban service industry and shop employees can speak 5-7 languages with adequate competence.  It is from among these and more where that we will find many talents who will help preserve the best of our native traditions, which again are best absorbed in the native tongue and script they are recorded in.

English as the Lying Language

There is a legacy colonial issue also being skimped over when using English.  Like all colonially imposed languages (Portuguese, Spanish, Arabic, etc.), the loss of knowledge and heritage goes well beyond a simple idea of the medium of instruction. There is a fundamental question at play: does India want to continue to be an Anglo-Saxon satellite?   Speaking English and studying foreign-centric books in English has had a deracinating effect among our social “science” oriented Anglicists. In the non-Anglo world we have long grown up with the question, especially if we were a colony, on whether the language of the colonizer is worth upholding.  This is not a book simply about rejecting a colonial language.  Rather, it is whether English should be how we learn, if we are to preserve the best of our traditions? This is a critical nuance.

If one is to study Western–oriented authors in the English language (including Indian Anglophones), then the idea that Indian science was far more advanced than what the colonizers brought forward will be missed.  Leave alone history distortion, which still plagues Indian education, our technical history of accomplishments in science and education has been blotted out, our ancient teachings and literature hidden away in plain sight. One way around this is to study our past in our own various languages, rather than through interpretative biases that typically accomplish Western English translations.  One can hope but the signs indicate there are already grass-roots moving in this direction.

One generation of Vision and Implementation

This book makes a clear case across multiple foreign countries of how local language has been a critical factor in cognitive skill development.   The impressive tour of the various scripts used and implemented abroad, as well as the translation technology options available today suggest all this is quite doable. I know I’m convinced already; only the focus here is to proceed with the ‘how’ in the most systematic and innovative way.  We need to find a way of accretively increasing our cognitive skills, not handicapping ourselves with a clean-slate that is a foreign language, resulting in many avoiding the category of being “have-nots”.

Is Sanu right that things can change in one generation flat?  The examples provided suggest a resounding ‘’yes’’.  What is required is not just political will, but personal will and tireless vision among the current breed of educators and influencers who do not need to wait for policy to take their own steps.

There are several opportunities to encourage this revolution amongst languages and teaching in India, and an entire language industry that will be reinforced. Indians are natural at picking up language basics, and may very well turn out to be the best linguists on earth.  But it needs to go to more commercially opportune subjects in STEM and other critical functioning areas of society that will help the community.   We are already seeing Lit Fests slowly include languages that are Indian.  The film industry can play a huge role, through more multilingual cinema. YouTube and other charismatic Influencers and public figures can also be used for distance learning.

What can we do?

With this book, it becomes clear than there is a lot that can get done in many ways.  The question is who should do it and what methods may be tried.  While official policy from the government may be less than encouraging so far, the methods to reach common people in multiple languages on advanced subjects is well under way through private and individual efforts.  Today’s electorate, for example, is not hostage to the English media, as complex discussions on politics and history are available, making the jantha far more savvy and less dependent on history education in English.  In technical subjects, including IT and engineering, the video boom is well under way.  How can all this be pushed forward and shaped? This is the big challenge. and any reader will naturally feel encouraged to be part of this movement.

In essence, all this can be done; let’s just keep moving in the direction that we expect it to happen.  Eventually we are going to see a far more technically savvy population.

Can we keep delaying this problem?

To quote our MEA Subrahmanyam Jaishankar who, when comparing the decisive approach of policymakers in China to that in India, mentioned how we in India have tended to keep pushing problems into the future – “…unless a society has the mind-set to decisively address its current issues, you are not going to go up in the world…”  (See here at 9:28)

To solve this problem, one has to understand whether it is a problem at all when we have such willing civilizational erosion taking place through our education system, a loss of memory and capabilities that our Anglicized have no clear idea about, and thus will never fight for.

Sankrant Sanu’s book gives us varied examples, such the experience in Germany, Japan, Israel, Iran and Turkey, and it becomes clear that thinking English is an advantage, is worthy of a myth-bust.   What Sanu has done is provide a broad survey with plenty of solution options for how the intelligence and creativity of a country can grow exponentially and quite quickly.  Educators should be reading this book!  Without waiting for policy inertia, the rest of us should be building on the ideas listed.  One can see multiple opportunities for a sequel study to TEMM, measuring our progress in the private and public sphere, against literacy goals that will serve our public in the coming decades.  A worthwhile read.