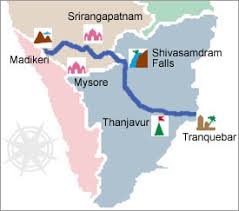 There is a line in the famous poem The Rime of the Ancient Mariner by Samuel Taylor Coleridge, “Water, water everywhere, not a drop to drink,” that aptly describes the situation in India every monsoon season, especially in the water deficient state of Tamil Nadu. Only his year, the situation has gone out of hand or has been allowed to go out of hand.

I say it has been allowed to go out of hand, because, the situation was predictable and predicted, but politicians and the voters who elect them have been preoccupied with emotional issues like Tamil pride and opposition to Hindi that will not produce a drop of water. We need to look at the causes and possible remedies to the situation. First we need to understand the source of the crisis, for it is nothing less of an issue.

Contrary to widespread impression, India is not short of water, but the problems are due to waste and mismanagement in two important states, Maharashtra and Tamil Nadu. I like to illustrate it beginning with Maharashtra. The Western parts of Maharashtra including, Mumbai, Pune and Konkan are flood prone due to excess rainfall, while Vidarbha and Marathawada to the east suffer from drought every year, though the problems appear more acute this year due to the massive flooding in Mumbai. It should be noted that scarcity in Eastern Maharashtra is due to excessive dependence on sugarcane cultivation, which is highly water intensive. Also politicians there have made no attempt to dissuade cane farmers from depleting the water table with bore wells. I know this for a fact, since as an electrical engineer working in the Pune district fifty years ago, I saw hundreds of pumps being installed by sugarcane farmers. It was worse in the so-called sugar belt to the east, which is much less industrialized.

At that time it was seen as an energy problem not recognizing it might eventually lead to a water crisis, due to depletion of the water table from uncontrolled pumping. Also the careers of politicians from the region depended on the goodwill of the sugar barons and the cane farmers. Commissioning of the 2000 MW Koyna hydroelectric plant in the 1960s made more energy available, leading to more pumps being installed and more water being pumped out for cane cultivation, leading in turn to greater water usage. No thought was given to the possibility of diverting and storing surplus flood waters from the monsoon. It was entirely feasible at the time but no one thought of the consequences of overuse of ground water using agricultural pumps.

Even now there is no reason why plentiful flood waters cannot be diverted and stored instead of allowing it to drain into the sea. Australia, the world’s driest continent manages by building small dams to store water. India could easily do that. But that needs leadership and imagination as well as a problem solving mindset.

The problem here is fundamentally different and we need to go back to the time when the southern part of Karnataka, then known as Mysore was ruled by the Maharajas. Unlike the water deficient Tamil Nadu, Mysore had two major river systems, the Kaveri and the Tungabhadra. TN was then part of the British ruled Madras Presidency. This allowed the British to get the Mysore rulers to sign a Kaveri treaty largely favorable to Madras farmers, especially in the Tanjore and adjacent districts. The seeming abundance of the Kaveri made farmers on both states engage in water intensive cultivation of rice paddy and sugarcane in Mysore. In addition the growing population of Bangalore needed Kaveri water also for the city.

Following the abolition of the Princely state in 1950, sharing of its waters has been a perpetual dispute between the two states. The Kaveri doesn’t carry enough for these two water guzzling states. So, some technical solution has to be found. But unfortunately, Tamil Nadu has a tendency to elect politicians who are not problem solvers like the late Sir M. Vishweshariah, but former movie personalities like Karunanidhi who appealed to voters’ emotions in the name of Dravida pride. Leaving aside the unscientific basis of this discredited notion, these politicians have done nothing to solve the state’s real problems like water scarcity.

So the voters share some of the blame for the current conundrum. Karnataka also grows millets like jowar and ragi (African millet or finger millet) which consume less water that are also drought resistant. It is also healthier than rice in fighting both obesity and diabetes. But the people of Tmail Nadu have a strong attachment to rice and even have a tendency to look down upon ragi as a staple food.  Even some favorite dishes like idli and dosa can be prepared using ragi. They are widely available in Karnataka. But leaders must lead and the voters must send the message to their politicians. Else they will have to learn to live with water shortages. It is hard to understand why so little ragi and other millets are grown in the state which could easily be done in regions outside the Kaveri basin.

This is a global problem. Desalination and river linking (in India) are being talked about. But these have their own challenges. Currently, approximately 1% of the world’s population is dependent on desalinated water to meet daily needs, but the UN expects that 14% of the world’s population will encounter water scarcity by 2025.[5] Desalination is particularly relevant in dry countries such as Australia and Israel, which traditionally have relied on collecting rainfall behind dams for water.

River linking is feasible in India, in the long term, but TN politicians have to be more accommodating. They will have to get surplus waters from Hindi states like M.P., Bihar and U.P. and deal with them more diplomatically than they have done so far with Karnataka. Above all, voters must demand solutions and not be swayed by demagoguery. Set priorities and demand solutions. The state needs problem solvers, not washed up movie figures engaged in emotional rhetoric. Ultimately we all deserve the leaders and the government we vote for.