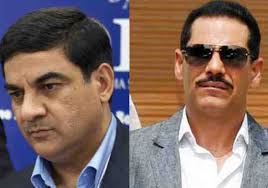 Robert Vadra was unknown to the public until he married Priyanka Gandhi. Why Priyanka married this nonentity remains something of a mystery. That is a personal matter. He is described as a businessman whose net worth is over $ 2.1 billion or about the same as that of the Infosys founder N.R. Narayana Murthy. One thing that Vadra has in common with the Gandhi family, in addition to unexplained wealth, is poor education. Unlike Mr Murthy, a highly educated engineer  who took more than 30 years to reach his present state, the hardly qualified Mr Vadra seems to have reached his billionaire status in ten years during the period when the Sonia Gandhi controlled UPA Government was in power.

Details of his business career are interesting to say the least. He was a dealer in used brass objects or a junk dealer, who later branched into exporting imitation jewelry. He is the owner of nine or ten properties in London, which is more than what the queen owns. In addition he owns a luxurious villa in Dubai and properties in Geneva in Switzerland. He also has properties in Haryana and Rajasthan, though under investigation by the CBI authorities.  All this, quite a haul for a junk dealer turned cheap jewelry exporter.

In his land deals in Haryana and Rajasthan, he seems to have benefited from his closeness to the Congress party chief, then Sonia Gandhi, now Rahul Gandhi. Of particular concern is Vadra’s land grab in Bikaner of land allocated to the Defence Forces and close to the Pakistan border. This is a continuing pattern, with Vadra and his associates associated with arms dealers being involved in money laundering. This should be of particular concern.

His associate and benefactor in his properties is one Sanjay Bhandari (above left), a known arms dealer now under investigation for money laundering. Money laundering involves turning black money (illegal money) into legal or white money. Even this can be of two kinds, money from businesses avoiding taxes, and counterfeited cash. Pakistan is known to have produced counterfeit  Indian currency on a large scale in its mint in Peshawar.  Experts have observed that the forged notes are of such high quality, they could only have been produced in a mint found in a sovereign nation and not in an ordinary press.

The government’s demonetization seems to have dealt a major blow to Pakistan since it no longer has large reserves of Indian currency to fund militants in Kashmir where only Indian money is legal tender. After all, stone pelters and the like are not paid by cheque or money transfers, only cash. So this step by the Modi Government has dealt a serious blow to Pakistan economy which is not far from bankruptcy.

It was reported that the FICN being pumped into India is also used in terror funding. “Out of the 11 cases being investigated by the NIA involving production, circulation and smuggling of high quality counterfeit currency, in one case, evidence has come on record indicating that fake currency was being used to fund terrorism. During the investigation of the case pertaining to the activities of David Coleman Headley and others, it was revealed that Fake Indian Currency Notes were given to him for use in India,” Chaudary (Central Minister of State).

Governments the world over recognize the threats of a cash economy. In the U.S., one cannot hold more than $10,000 in cash. Some years back, Rahul Gandhi was detained in Boston airport for being in violation of this law. But then PM Vajpayee, in a case of misplaced generosity, managed to get him released using his influence with the U.S. Government.

Pakistan’s intelligence agency ISI, which oversees the mint in Peshawar, uses organised networks including those run by its clients like Dawood Ibrahim, LeT, besides international criminal networks to push fake currency into India.  Prime Minister Modi gave this as a major reason for demonetizing rupees.

Further what does Bhandari, the arms dealer sell, not fighter planes or submarines, but small arms like guns, rifles and hand grenades. Who buys them?  Not major governments, but ISIS and those selling to terrorists, many of whom are active in Kashmir and other parts of India. So Vadra related to the powerful Gandhi family, with business associations with arms dealers like Sanjay Bhandari and his associates, should be of serious concern to the government. Arms dealers like Bhandari are not charitable institutions. They must be expecting something in return for their generosity to Vadra. When India bought fighter planes from France, they didn’t pay in cash. It was paid by funds transfer to Dussault. Only small time traders like Bhandari use cash for weapons. Even I when buying firearms for personal use in the U.S. never paid in cash.

As a result, money laundering by Vadra’s associates should be of serious concern to the Government.