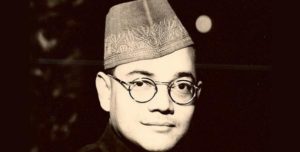 History revisited: Indian history has been heavily doctored to glorify one family at the cost of real heroes.

“Netaji’s leadership resulted in the British losing the loyalty of the Indian land and naval forces on which the British Empire stood. This was confirmed when naval and army personnel at several centers mutinied when the British put INA on trial as traitors. With the memory of the horrors of the 1857 mutiny revived, the British decided to leave in a hurry.’ – Dr. N. S. Rajaram

In the novel Vicomte de Bragelonne by the French writer Alexandre Dumas, an innocent man is imprisoned for life and his identity sealed behind an iron mask which cannot be removed. The reason? He happens to be the twin brother of King Louis XIV, then ruling France, and might have proved a better and more popular ruler. Alert to the threat he posed, Louis had him exiled for life with his identity concealed forever behind an iron mask.

When the details of Netaji Subhas Chandra Bose’s disappearance and exile become fully known, we may find a surreal similarity between Eustache Dauger, one of the names of the masked man, and Bose. For a man so important — he was the most popular Indian leader at the time of Indian independence. Surprisingly little is known about his life, and what is known is heavily distorted to downplay his greatness to exalt Gandhi and Nehru.

The official story, of course, is that as World War II was drawing to an end with Japan not far from surrender, Netaji took off from Saigon on a Japanese plane to avoid capture by the British who had declared him a war criminal. And that the plane crashed at Taihoku Airport in Formosa (now Taiwan) on August 18, 1945, killing him and some of his companions. He is supposed to have been cremated and his ashes deposited at the Renkoji temple in Japan.

The Disappearance
There are several things wrong with this story. First, there was no plane crash at the airport on that day or during the weeks before or after August 18. The nearest was the crash of a US transporter in September 1945, that too 200 miles from the airport. Next, there is no record of Netaji or any of his companions on the plane being cremated on that day. Most seriously, several people saw him alive after his supposed death, with one American reporter Alfred Wegg noting Netaji was still in Saigon where he saw him three days later.

The British and later Indian governments maintained different positions at different times over Netaji’s fate, depending on what suited them. At first no one believed the story because the allies — the British and the Americans — knew there had been no such plane crash. Americans had broken the Japanese code and were carefully monitoring all Japanese movements. Still it suited the British to maintain the fiction that Netaji was dead. They feared nothing more than his return to assume leadership of the now defeated INA, soon to be joined by the regular Army,  a development they dreaded more than anything.

Thanks to Netaji and his INA, the Indian armed forces had begun to see themselves as defenders of India rather than the British Empire. This was admitted by British Prime Minister Clement Attlee, who made the decision to grant independence to India. Netaji’s leadership resulted in the British losing the loyalty of the Indian land and naval forces on which the British Empire stood. This was confirmed when naval and army personnel at several centers mutinied when the British put INA on trial as traitors. With the memory of the horrors of the 1857 mutiny revived, the British decided to leave in a hurry.

While officially subscribing to the “death by plane crash” theory, the British were not above raising the spectre of Netaji’s return when it suited them. In 1946, when Lord Mountbatten took Jawaharlal Nehru to Singapore, Nehru was enthusiastically cheered by the INA soldiers. Archibald Wavell was still Viceroy but Mountbatten hoped to succeed him (which he did). He cautioned Nehru not to participate in any programmes with the INA because that might make Netaji return and take over their leadership, leaving Nehru out in the cold! Nehru immediately cancelled his programmes organized by the INA veterans.

By then Bose had become a political hot potato. Indian leaders, Nehru and Mahatma Gandhi, didn’t want him because as the youngest and most popular leader he would have posed a challenge to Nehru. The British who still had dreams of recovering their Empire saw him as a major threat because of Netaji’s growing popularity with the soldiers who worshipped him. His leadership was legendary. He had shared in the soldiers’ hardships during the INA march, which the British officers did not. This was in striking contrast to the British abandoning their troops and running away to India when the Japanese attacked Malaya and Singapore.

To go with it, Netaji had seen clearly, more clearly than the British themselves, that the British were a spent force and their ‘victory’ over Japan was meaningless. At the Simla Conference, when the British were trying to get the Congress to agree to the Wavell Plan on self-governance based on communal representation, Netaji in one of his last broadcasts urged the Congress not to accept it. He pointed out that even though Britain might ‘win’ the war, it would be reduced to the level of a second- or third-rate power. He said it would be a great mistake to overestimate the British and underestimate the power of the Indian people.

Trust the Indian people and not the British, was Netaji’s message. To go with it, he probably knew that he had snatched the loyalty of the Indian Army from the British. So by 1946, like the legendary hero of the Dumas novel, Netaji had become too great for everyone’s comfort. The British, still with dreams of Empire, and the Congress, hoping for a smooth transfer of power, both wanted Netaji out of the way. Above all both Gandhi and the British wanted Nehru as PM and not Bose. So the story of his death in plane crash concocted by the Japanese to cover his escape to Russia suited them fine. The British would rather deal with Gandhi and Nehru than a firebrand nationalist like Bose.

The Reappearance
While he did not die, Netaji did ‘disappear’ with the official story of his death in a plane crash supported by two inquiry commissions, both appointed by Congress governments. But there were many sceptics, notably Netaji’s own family members. They kept pestering for files on Netaji maintained by the Government and for more inquiries. These files were under the direct control of the Prime Minister beginning with Nehru. In August 1978, Morarji Desai, India’s first non-Congress Prime Minister, stated that Netaji was alive and had taken sanyas (as a reclusive ascetic). He repeated it at a book release function five years later.

As Prime Minister, Desai had access to secret government files on Netaji. But by then, Netaji’s return and voluntary exile as a sanyasi of the Dashanami Order was already old news to his followers. Nor was it a surprise, for Netaji always had a mystical streak in his personality and was known to spend weeks and months in solitude and meditation as a youth. Beginning about 1970, it was widely believed that one Gumnami Baba, later known as Bhagwanji living in solitude in places like Varanasi and Ayodhya, was indeed Netaji. He died on September 17, 1985, aged 88. This remains unconfirmed, a matter of debate and will not pursued here. This is discussed in two books — India’s Greatest Cover-up and the soon-to-appear No Secrets both by the investigative journalist Anuj Dhar.

It is not entirely improbable if he chose a life of ascetic and voluntary exile, for Netaji had often expressed his wish to end his life as a sanyasi once his job was done. He had had enough action and adventure to fill several lives and not surprisingly he sought peace and solitude in his old age. Also, he was not after position; he had resigned from the ICS which he had passed with flying colours and plunged himself into the freedom movement.

The Real Mystery
So the real mystery is: Where was Bose and what was he was doing from 1946 to 1970? To answer this definitively, several governments, especially the Government of India, have to declassify their papers and make them available to scholars. But so far all we have are bits and pieces and stonewalling by the Indian Government invoking ‘national security’. But these bits and pieces are interesting in themselves. There is credible evidence that he was a guest of the Soviet Union from 1946 to 1950 and then went on to China and possibly Korea.

The most interesting of these are tantalising details, including at least one photograph, suggesting he was in Vietnam and helped Ho Chi Minh in his war against the Americans. If confirmed, that would explain his exile in India even after 1970. The US withdrew from Vietnam in 1974 in a humiliating denouement. It was widely believed in official circles that what defeated the US was the drug addiction of its soldiers facilitated by Ho Chi Minh’s ‘drug war’ against the US. Bhagwanji claimed later that Netaji had helped his friend Ho plan the drug war. This might have made the US demand Netaji’s  extradition to be tried in US courts. (The US too maintained files on Netaji)

It has been claimed that he worked with the Vietnamese delegation during the Paris Peace talks that led to US withdrawal. There is a 1969 Associated Press photo of the peace talks with Le Duc Tho that shows a large serious-looking bearded man at the extreme right. (See photo above) In spite of the 25 year difference in time, it bears a striking resemblance to Netaji in photos taken in 1942. The identity remains to be confirmed by forensic experts specialising in photo analysis.

Had he been present in India in 1946, Bose would in all probability have become the Prime Minister. Having exiled him in 1939, Gandhi could not have stopped him the way he stopped Sardar Vallabhbhai Patel, just to elevate Nehru. Bose did more to hasten the British departure from India than anyone else. He was the youngest and also the most popular leader in India. But it was not to be. He was too great and had too many enemies. Like the Man in the Iron Mask, he too had to be forced into exile and erased from history.

But this is the real tragedy: successive Congress governments have written him out of history books, as if he never existed. We cannot restore him to his rightful position, but the least we can do is give him his place in history by removing his Iron Mask. This can be done only when the Government releases the voluminous files it maintains on Netaji and makes them available to scholars, something that is long overdue.